So on the 2nd of January, I finally managed to get a winter route done in Scotland. The conditions have been super fickle this season, and if it’s not been in the plus 10ºc range, its been up to 100mph+ winds! Everyone I know that is into winter climbing in Scotland is finding it very hard to stay motivated with such temperamental conditions. We have had a handful of climbable winter days this year, but it is very much a season of grab it whilst it’s there, as whatever winter that decides to show its face has disappeared within a day or so. 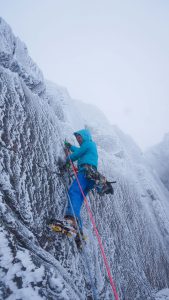 Guy on pitch one of “Open Heart”

Guy and I played it safe and headed into the Northern Coirries on the 2nd. We wanted to see what the conditions were like and blow away the cobwebs after the festive period. After some toing and froing on what to get on, we eventually decided to jump on “Open Heart” (VIII/9) which is a steep corner/groove line joining the big ledge below the Auricle and Ventriloquist. Guy led the short first pitch, then I took the meaty second pitch, as Guy had led this before when he did the first ascent a few years ago. The crux pitch was good fun and went down without much fuss. We then opted to finish up Auricle as neither of us had climbed that section of the crag, so it was a logical and fun way to finish off the day. 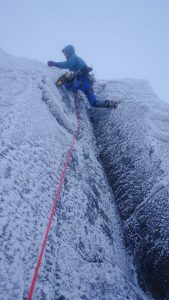 Me on the crux pitch of “Open Heart”

Low and behold the next day after Mhairi and I had stayed up north in the van, it was warm wet and the Coirres were black! So we drove down to Pitlochry and went for a windy but pleasant run up Ben Vrackie. It was awesome to spend more time in the hills, but also pretty crazy how quick all the snow and winter had disappeared overnight!

It was then back to my training wall and time to do some work before any real conditions returned last Saturday. I needed to be at Glenmore Lodge on the Saturday evening to do a talk and slideshow at the Association of Mountain Instructors (AMI) AGM, so it was a bit of a headache trying to decide what to go and climb. The conditions looked like they would be good, and so did the weather, so Guy and I decided to risk heading up to Ben Vorlich to have a look at the route “Logical Progression”. This route was first climbed in 1999 and was done with the gear pre-placed and the route pre-practised on top rope. It has had one repeat around 2005 in a very similar way. 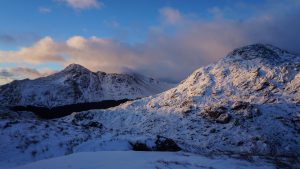 When we eventually found the base of the climb, that was a feat in itself, what we found was pretty disappointing. The route was fully littered with rusty, old and rotten gear which you definitely wouldn’t want to trust but to make matters worse, it was all fully glazed over with a nice hard layer of verglass. It did not look like there was many other places to find protection on the route and you would have needed a blowtorch to excavate and remove the monstrosities that were contaminating this otherwise amazing looking line. So unfortunately, we didn’t get on the route and decided to come back on a later date to remove the gear and return the cliff to its original state.

It was annoying to not be able to climb this awesome looking line due to the style it was left in on previous attempts, but it was also pretty cool to see that 18 years ago the ethics of Scottish Winter climbing could have taken a very different path, but thankfully didn’t! This style of approach was obviously thought by a few individuals to be the “Logical Progression” of the sport. But if it had, this would probably now mean that there would be a number of amazing lines, buttresses and mountains littered with rotting old gear and many of the hard lines would be far more dangerous and less enjoyable to battle your way up. I am in no way wanting to undermine how unbelievably impressive climbing a route like this nearly 20 years ago is (It is truly inspirational), or even that it was pre-practiced before the FA (that is personal preference and for the sport to keep progressing, I see this happening more and more). I Just don’t see why the gear wasn’t removed afterwards, and I’m happy to be part of the majority of Scottish winter climbers that see this as the wrong direction for the sport. 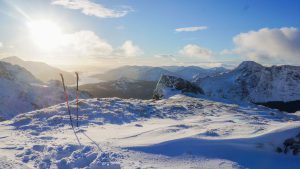 That was just my view on the situation, and maybe I’m wrong, but it definitely nearly ruined my day in the mountains. But thankfully all was not lost and we still had a bit of time before I needed to race off towards the Cairngorms for the evenings talk. So Guy and I head off in search of a line that we had spotted on the walk in.

We ended up climbing a cool one pitch route that looked deceptively easy. We thought it would be a quick jaunt up a straightforward route to salvage the day, but it turned out to be a bit of a battle and had an enjoyable sting in the tail! I led the route and was happy to finally pull onto the top of the buttress and away from the strenuous oversized crack below.

On the walk out we settled on the grade of VII/9** and called the route “Moral Compass” as it was just that which pointed us towards this route instead of questioning our own ethics! 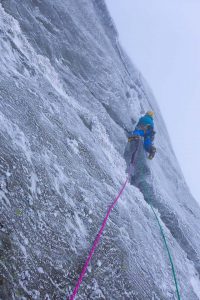 Once back at the car I sped off to arrive at Glenmore Lodge, arriving with just ten minutes to spare before my talk was due to start. It was awesome talking to a crowd of psyched outdoor enthusiasts and a good way to end a fun day on the hill! I stayed in the van that night hoping to get some winter action the following day, but unsurprisingly it had all melted by the Sunday morning and I made the now familiar drive home wondering when some steady winter conditions might return to Scotland.