Since my last post about the islands of the Outer Hebrides, I have been on the move a fair bit throughout Europe. 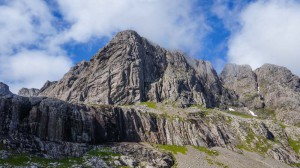 After my return from the islands, I had a couple of weeks at home in Scotland where I got some work done for my sponsors, and also on the farm to earn some last needed cash before Mhairi (my girlfriend) and I headed off to the continent for two months. Between jobs, I also managed to get in a couple of awesome days trad climbing in the mountains and glens, trying to make the most of the good weather in Scotland while I was around.

Guy on pitch three of Trajans’

Me on pitch four of Trajans’

One of the highlights was a day I had on the North Face of Ben Nevis with Guy Robertson, where we did the outstandingly good route {{{{{Trajans Column on Carn Dearg Buttress}}}}}}, which is a four star E6 of impeccable quality! Crazily it was my first rock route on the Ben, and thankfully it did not disappoint. It was cool to get such a good days climbing in before I headed off, to remind me that Scotland’s climbing is nothing to regret going back to, which is sometimes hard when you go away on these long amazing road trips.

So after that it was all stations go! A couple of days later we packed up all available space in my VW Golf, strapped on the bikes and headed for Dover. Judging the time it would take us to get to the ferry port at night with no traffic was all good and well, except I forgot to add in some time to arrive at the ferry before its departure time. So it was a bit of a blast through the night and we arrived just in time to drive straight onto the ferry as the rest of the cars had just finished boarding. Nothing like cutting it fine for a bit of excitement. 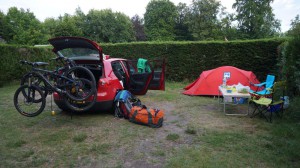 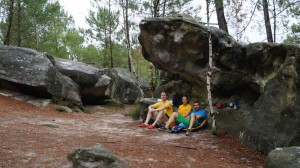 Our first stop was Fontainebleau where we met up with Adam Russell for a day of rain dodging, bouldering and slacklining, whilst he was on a day off from a works training course in the area. After that, Mhairi and I stayed in the area for another couple of days, which included a day at Disneyland Paris!!!! What more could you ask for from a holiday, climbing and Mickey Mouse?! 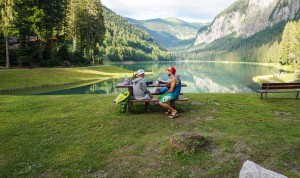 Not a bad place for tea

Since Font we have been to some amazing places through France and then down into Italy, to meet up with my sister and James who were on holiday down there, and back up into France again, which is where we are now. 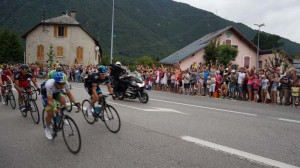 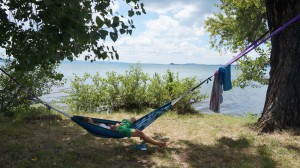 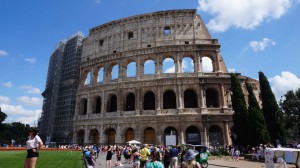 Guess where this is.

It’s been really fun seeing so many new places over the last four weeks, and it’s been cool not having any real destinations in mind. We just stay somewhere for a couple of days then open the atlas and decide where we might go next, and if somewhere looks good on the way, we just stop! For example, I’m currently writing this from a seat outside my tent, with Mhairi slacklining in front of me beside the lake (Lac Serre Ponçon), which is surrounded by mountains that are just catching the last of the evenings sunlight as the windsurfers and kite boarders make the most of todays easing wind. We stumbled across this amazing place to wild camp 5 days ago after bumping into two French guys that were slacklining near by and they said it’s all good to camp by the lake, so we did. 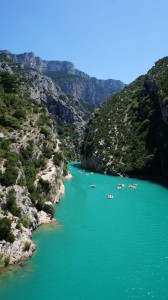 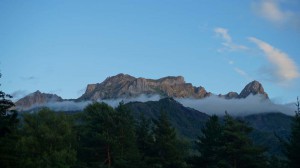 The View from our campsite in Barcellonette

Along with climbing and slacklining, Mhairi and I have done a fair bit of mountain biking, or VTT as it’s known as out here. As well as the down-hill biking we’ve done at several ski resorts, we’ve also done some pretty awesome endurnce rides in the mountains and the surrounding areas. The scenery you get to see over the large distances you can cover is outstanding, and it has been a good way to keep up the fitness, along with the long open water swimming sessions we have been able to do in the Alpine lakes throughout our various locations on the trip. ‘Fun’ is a bit of an understatement! 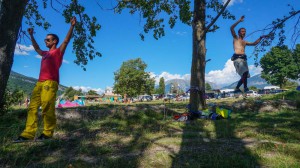 Its slacking off time. 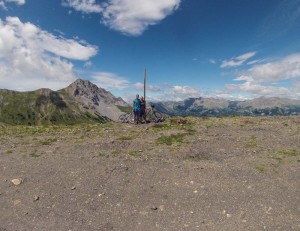 The view before the decent on the Pra Loup Enduro

We are currently in our fifth week of our intended eight and its super exciting to think of what we might get up to in the next three weeks, especially as the last 4/5 have been so packed full of new places and adventure. So keep an eye on my blog and I’ll update it as soon as possible on my return to the UK. But for now I’m off for an evening of slacklining and BBQing. 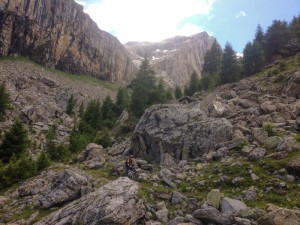 Some of the terrain we covered on the Pra Loup Enduro