Last week was the BMC International Winter Meet 2014, and what a week it was. A bunch of climbers from all over the world came to Scotland to sample some of what the Scottish Winter season has to offer, and as usual, it did not disappoint!

I had a really fun week of climbing and meeting new people. I’m going to give a rough outline of what I got up to and with whom and when, and then just let the pictures do the talking. 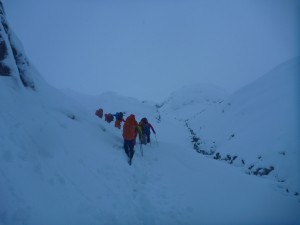 Lots of guests and hosts heading into SCaL

Day 1, I was first paired up with Mirko Breckner from Germany. Mirko was a totally awesome guy who also turned out to be a very capable and strong climber. After chatting about what he wanted to get out of the trip, we headed for Stob Coire an Lochain and did the direct variation start to “Central Buttress” called “Starting Block Start”, which gives a 3 start and very enjoyable VII/8. The perfect way to start a good weeks climbing. 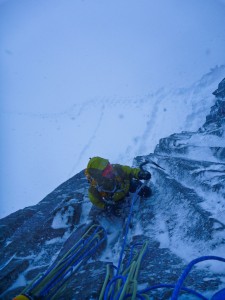 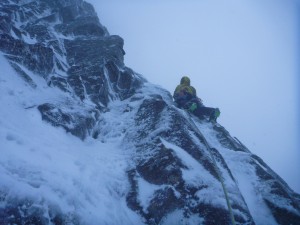 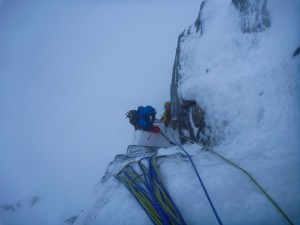 The man at work, James Dunn filiming on “SBS

Day 2, On our second day together, Mirko and I headed up the Ben to try and make the most of the better weather on the West. After crossing some suspect snow and scouting around for what to get on due to the limited access options due to a high avalanche risk, we opted for Central Trident Buttress area and jumped on a steep and intriguing line. Throughout the day, we didn’t know anything about our chosen route, we didn’t even know if it had been climbed before. It took a steep overhanging chimney on pitch one, and then onto a steep and technical thin wall/ice climb on pitch two. It turns out that we had followed and made the second ascent of “Heidbanger” (with the “Cranium” start) originally given VIII/8, but before I knew what the route was and due to the current conditions, I would have given the route IX/8 on the day. It was a bit of a spicy number! 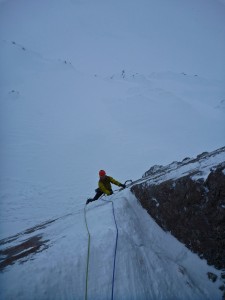 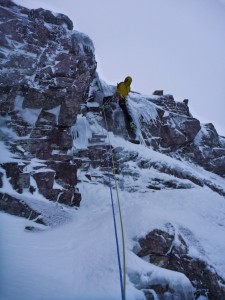 Mirko on the last short pitch of “Heidbanger”

Day 3, We wanted a shorter day, and opted for Sneachda, but unfortunately the weather didn’t play ball and we decided to bail out after we had reached a very stormy and horrible coire. We ambled back and chilled for the rest of the afternoon, looking forward to the good weather forecast the following day. 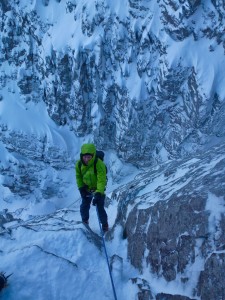 Day 4, On Thursday we changed partners and I was paired up with Jon Walsh from Canada. Jon is a super strong climber, and was eager to sample some of Scotland finer vintages, in the form of new routing on Beinn Eighe, possibly one of the country’s best winter climbing venues! We also teamed up with Nick Bullock, whose new partner wanted a chilled rest day at the lodge. We all discussed our options and decided to go for a line that Nick and I both new of in the West Central Gully area. Our route took a steep roofed start to the first terrace and then after a cheeky traverse right to gain the steeper ground, it forged its way up the headwall for two pitches to find the summit. 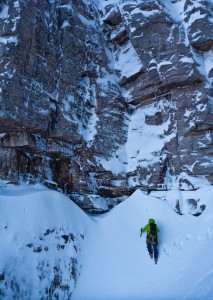 We gave the route VIII/8 **** for its steep start and sustained second pitch and the 4 stars for its outstanding position and climbing quality. We called it “Making the Cut” 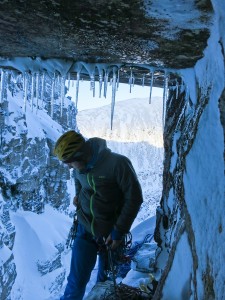 Gearing up below the roof of “Making the Cut”
Photo. Jon Walsh 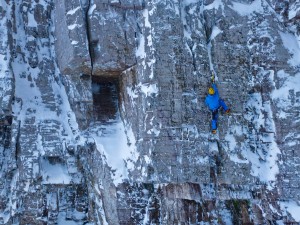 Me leading the first pitch of “MtC”
Photo. Jon Walsh

Day 5, Unfortunately for me, I had tweaked my knee two days prior whilst on the Ben, and after the big day on Thursday, I was in quite a lot of pain. Not wanting to injure it for any prolonged period of time, I opted to head home on the Friday morning and try and see a physio about my knee. A lot of the meet members had gone to Newtyle (dry tooling venue) for the day because of the bad weather, so I stopped off there on my way home for a bit of a climb and to say cheerio to Mirko and the other guests. It was a fun day in the cave, and it was cool to see a mixture of abilities and styles throughout. 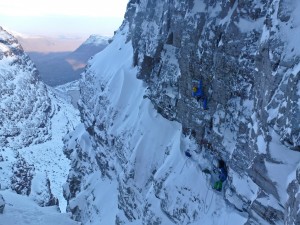 Me leading and soaking up the atmosphere on “MtC”
Photo. Jon Walsh 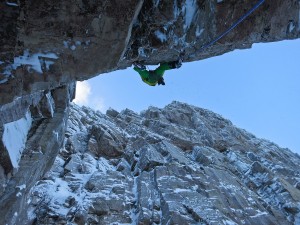 All in all the week of the meet was a big success, and I think it is totally awesome how the BMC seam to put so much time, money and effort into bringing all the countries, climbers and potential friends together to show what are amazing little country has to offer, keep it up guys! I would highly recommend it to anyone, whether they want to be a host or a guest from another country, get involved next time! 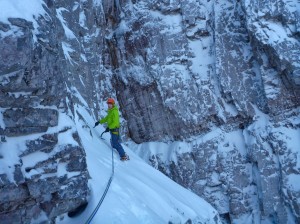 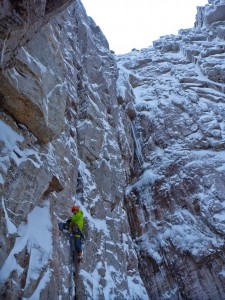 Jon starting up the headwall on “MtC” 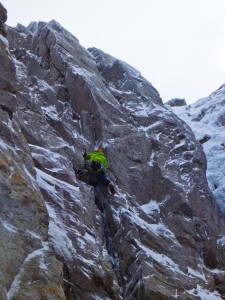 Jon nearing the top of the off-width pitch

So after 4 days rest I stupidly decided to try and get out in the hills again yesterday. Guy Roberston and I headed out in search of some good mixed conditions. Unfortunately all we found was an abundance of snow and wind, so we decided to bail out once again, it seems to be a bit of a theme of the season for a lot of climbers this year! Something else that was annoying was that my knee clearly wasn’t any better, in fact, the deep snow walking seemed to make it worse. So after another trip to the physio yesterday, I have been put on two weeks recovery layoff, which means no venturing into the mountains! Not a happy bunny!

So it will be pull-ups and finger-boarding for me for a wee while, so keep an eye on this blog in around two-three weeks time, because I’ll be like a caged tiger wanting to escape and go mixed climbing as soon as I can (if tigers like mixed climbing, I’m not sure). 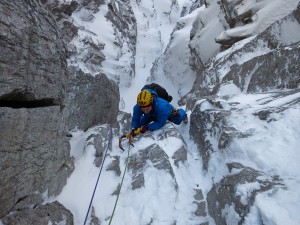 Me reaching the belay after the first headwall pitch. On “Making the Cut” 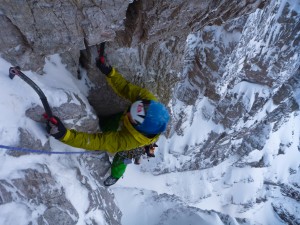 Nick reaching the belay on “MtC” 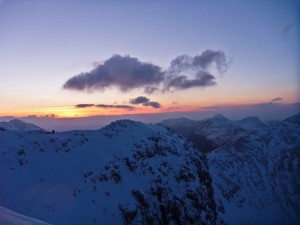 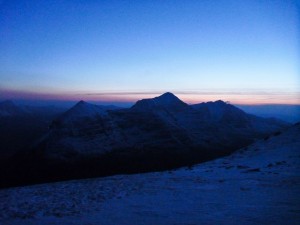 The sunset on the walk out