Since my last post about The Demon, I have had some very unsuccessful days out in the Scottish mountains, but also some amazing ones too!

In December Will Sim and I took advantage of a lull in the stormy weather for a quick hit in Sneachda. We managed to make the second ascent of a very cool and tricky crack line called “Babes in the Wood”. This was a cool route that offered some shelter from the high winds but didn’t substitute anything when it came to the quality of the climbing. 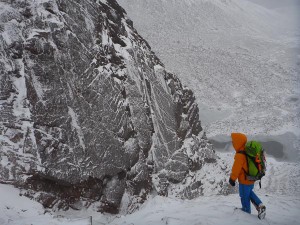 Will looking over at the wall of “Babes in the Wood”

After that route it was the busy festive period and also the return of the awful weather and conditions. I had a good run of training days to keep up the psyche and jumped at the chance to get out again as soon as the weather allowed.

My next few outings into the mountains weren’t overly successful. Will and I had a run of attempting some amazing looking lines, but not actually getting anything ticked. Whether it be conditions, Illness or just lack of psyche for certain situations, we just couldn’t manage to get anything sent.

But last weekend all that changed! After a failed trip to the Dubh Loch the previous weekend, I had kept my eye on the weather and opted to make the two hour drive and walk into the coire last Thursday with my girlfriend to take a look at how the conditions were doing/holding out. It was obvious that things were doing well! There was lots of ice hanging around and with a cold forecast for the following day, I was super psyched to get back in there at the weekend and hopefully get on an obvious looking line that I had spied. 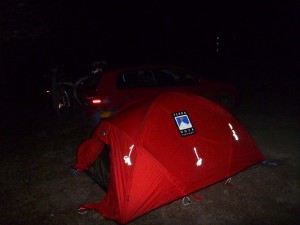 My hotel for the evening. 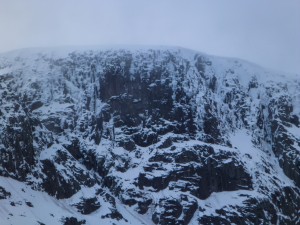 I sent my photos and findings over to Guy Robertson who I was planning on climbing with and together we decided that it looked too good to turn down.

So on Friday night I made the drive over again towards Ballater, where I met up with Guy, Nick and Will, and after a quick chat and deciding on getting an early start, I put up my Quasar tent and caught a few hours sleep.

4am came around pretty quickly, and it wasn’t long before Guy and I were cycling along the 4×4 track on our way to the all mighty Creag an Dubh Loch. We reached the base of the crag well before daybreak, but this was fine, as once we had geared up and soloed to the bottom of our route, we just sat on the big neve covered ledge and watched the sun slowly rise above the bright headlight dots of all the other teams racing in to try and mark their territory on an icy line on this impressive mountain face. 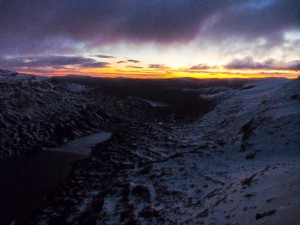 Waiting for the sun to rise to light up our route.

Once there was enough light to see where we wanted to go on our first pitch before we could reached the steep and immaculate looking ice weep above, Guy set off up the lightly iced and immensely fun lower section forging his way up with every pull. Just after Guy had set off, there was a sudden arrival of two other teams to our quiet little ledge. One team was Nick and Will, who were just keen to get on something/anything that looked good (which they did), and the other team was Ian Small, Simon Richardson and Doug Hawthorn, who also had their sights set on our line up to the obvious icy abyss above. But you gotta get up at stupid o’clock if you want to win these sensational prizes in the Scottish mountains in winter.

Despite this, Ian and Simon went on to make the FA of a brilliant looking line to the left of “The Sting” (a Doug Hawthorn ice route). 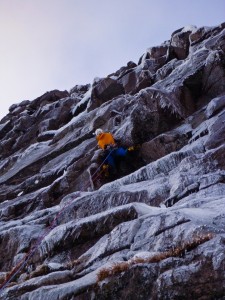 After Guy had succumbed the tricky moves on the steep section of the first pitch, he reached the belay and I got stuck into seconding the fun and 4 star climbing to reach his position. Next it was my turn to take the helm. I set off round the corner and soon found myself situated below a steep and overhanging roof section caped by an icy curtain. After a few steep moves that had a very continental feel to them, I was into the midway bowl and made my way up the distinctive wave feature of ice that loomed above my head. Once I was over this, it was plain sailing all the way to the belay and then a short easy pitch by Guy lead to the top. 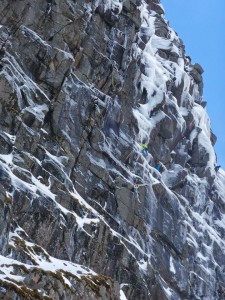 Me setting of on the second pitch of “Defence of the Realm”
Photo. Hawthorn collection. 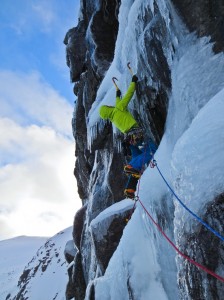 Me overcoming the steep bulge on “DotR”
Photo. Guy Robertson 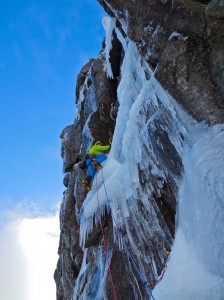 Me reaching the pod below the icy wave,
Photo. Guy Robertson

After walking back to our bags with a huge smile on our faces we bumped into all the other climbers in the area that had had a successful day. It was cool to see so many happy faces and psyched climbers. There is an awesome write up on Scottishwinter.com about all the new routes on the face done last weekend which offers a good read.

Our route went at about VII/7 and was worthy of a 4 star rating! We called it “ Defence of the Realm” and it was a real joy to be part of another new route at this amazing crag. 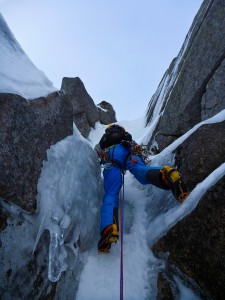 Guy on the easy last pitch 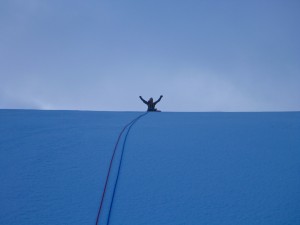 After a quick trip back home, I jumped back in the car on Sunday night to drive West to meet up with Guy, Nick and Will again, but this time in Glen Coe. The usual easy drive over was prolonged and made much more stressful by the amount of snow falling and lying on the roads. But eventually I made it to the Kings House Hotel and after a chat and a drink we headed to bed ready for hopefully yet another stonking days climbing.

Will and I reached the base of Stob Coire an Lochain with an open mind on what we were going to get on, and once we had geared up and scoped the crag, we decided to go and have a sniff at an amazing looking new line. Unfortunately it wasn’t meant to be and after some quick decision making, we opted for “The Tempest”. 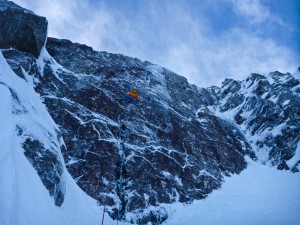 Will leading “The Tempest”

“The Tempest” is a bit of a test piece in the area, and has got a reputation for the style in which the first ascent was made, using redpoint tactics and preplaced protection. Even though these styles are frowned upon now, I personal think it was still an awesome effort by Neil Grasham to have the balls and psyched to get on such a cool looking line back in the day when it was first done.

Will lead off first as I had been the one trying the new line earlier. After some time finding gear and deciding on which way to go, Will probed upwards and eventually found his way to the icy upper section. I was quite happy on my comfy belay in the nice weather watching Will do his thing. But it all changed as he moved on upwards and it was apparent that he was going to get no more weight baring protection. His last worthwhile runner was just at about half height, and the last few moves onto the crudier neve/snow slope above were hard to watch as it was fairly obvious that he would have been lucky to walk away from the fall if his axes were to rip on the last moves.  But technique prevailed and he made it onto the easy ground above.

He popped his head over the top and asked me what I wanted to do, whether I wanted to second the route, leave it for another day, or have him abb down and I would just lead it. The light was starting to slowly fade and we both knew that trying the new route earlier and Will’s ascent had both taken a fair bit of time. But I got him to rap down anyway and I just put my headtorch on in case darkness made its way in, as I wanted to lead the route.

As soon as I started climbing and was committed on the face, the weather totally changed, and the wind picked up and started dumping floods of spindrift down on my head. I pushed on and soon found myself at the point where I too would have to leave the last worthwhile protection, but the length of the bold climbing looked much further from here and I had a quick word with myself before I continued upwards. I placed an atrocious pecker in the upper ice, but knew that it was a pointless exercise, but it’s good for the head to focus on this simple task to take my mind away from the ever growing distance between me and my last runner. I finally reached the top moves and found myself composed and comfortable despite my serious position, this all changed when I took my left axe out to make one last swing into the ice before reaching the top neve, and my right axe (that I thought was bomber) ripped down 2-3 inches in the cruddy ice behind the outer layer. Thankfully my next left placement was good and I swiftly pulled up on the easy ledge above. Ahhhhhh…… the addictive adrenaline and euphoria rush of overcoming a hard and technical situation soon set in and I rapped down and stripped the wall with yet another beaming smile on my face. 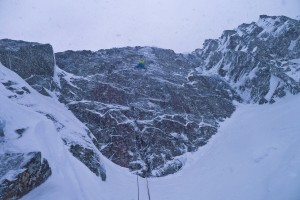 Me reaching the ice on “The Tempest”

We had both had a good day, and it was cool to hear that Guy and Nick had also had an awesome time, making the FA of a new winter only route on another part of the Coire. We all trotted back to the car on cloud nine and after the usual ritual of sorting gear, we all went our separate ways and headed home. 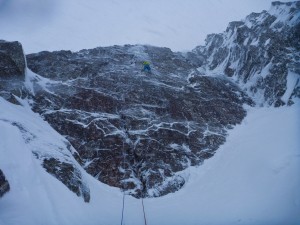 Me about to get into the bold ground on “The Tempest”.
Photo. Will Sim

Now that the weather seems to be settling a little, and I (hopefully) seem to be out of my rut of getting nothing done, I’ll hopefully be posting much more stuff on here from awesome ascents in the coming weeks, so keep and eye!