Last weekend I headed down to the Lake District with a bunch of friends from Scotland. Andy Turner had organised a bit of a get-together at the Works tooling venue. He is trying to get a good few climbers together for a British team to visit the Ice climbing World Cup competitions this winter, and last weekend was a bit of an experiment to see who would be keen to join him on his worldly adventures around the comps. 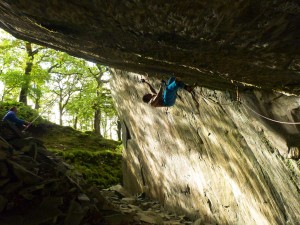 Personally I’ve never really been that fussed with competitions before and wasn’t too sure I even wanted to do the Ice World cup comps. But regardless, I knew it was going to be a fun weekend with a good bunch of folk, all climbing and laughing together. So southbound we headed! 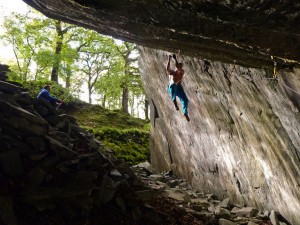 Mid Crux moves.... to let go is to powerdab/ go to hospital.

My main objective was to try and get the route ticked that Paddy Cave and I had bolted late last season which I had had a little play on a couple of times on previous visits. It is a 20 meter route that follows a very steep roof line. The moves are big and powerful, and if you mess up the crux sequence, you fall worryingly close to the ground (potentially hit it on rope stretch).

On the Saturday afternoon, after warming up on some of the easier lines that the Works has to offer, James Dunn and I headed off up into Bakestone Quarry so I could try my route. On my first attempt my body didn’t feel warmed up for the big powerful moves, and I fluffed the start of the crux sequence. But after lowering off and taking 5 mins rest, I jumped back on the route (literally) and got it sent with only minimal grunting and groaning!

I was pretty psyched to get it done, as I am just getting back to climbing fitness again after having the summer season off for triathlon. But regardless of fitness, this route was my style, hard and super powerful. The climbing is similar to the route “DTS Spirit” (D12) in the Newtyle cave in Scotland which was put up by the French DTS boys, except it was a fair bit harder and steeper! I called the route “Powerdab” due to the nature of the ground fall potential climbing and graded it D13. 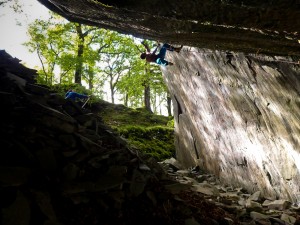 Having only ever climbed one other D13 before, and it was my own route “Frankenstein” in Newtyle, it was hard to grade “Powerdab”, especially when they are both so different in character.  But I settled on D13 (knowing it was much harder than “DTS Spirit”) and that makes this route the second D13 in the UK and potentially one of the hardest tooling routes in the country.

Having got the route sent, James and I headed back down to the main area to catch up with all the other folk and get stuck into some more funky and fun climbing!

Once everyone was totally wrecked from tooling all day….. and  after some pub grub and an awesome nights sleep in my Quasar, we awoke bright and early on Sunday morning, ready to get stuck straight back into it again!

I headed back up to “Powerdab” so James could get some footage of the route, and after we had got the scoop, we all headed back down to the main area for the rest of the day.

It was an awesome weekend of climbing, sending, meeting and making friends, good psyche and even better laughs! Basically everything you could wish for in a climbing trip. 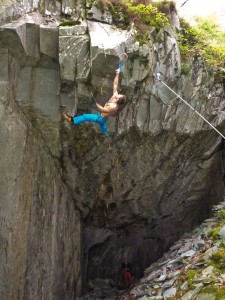 Nearing the end of the powerfest!

Andy also did a really good job of getting people’s attention regarding the Ice World Cup comps, and even I might even be starting to think about signing up for a couple this winter. But you’ll have to watch this space for more info on that front.

(All photos credited to Douglass Russell)