It’s been a while since my last post, and I have managed to do some pretty cool climbing in that time. But unfortunately, due to the weather I haven’t done much cranking outside in the last three weeks! 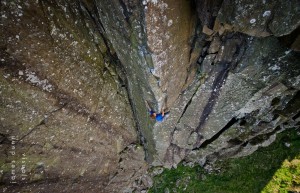 Me mid-crux on Hells Kitchen Arete E6, 6a

A few weeks back I headed out to Ireland to attend the annual Fairhead climbing meet, thankfully we made the decision to head out the week prior as well and managed to get some totally awesome climbing done, with some of the best weather of the year so far!

I headed out with Neil McGeachy, James Dunn, Douglass Russell and Ross Mathers managed to come along for the first part of the trip. We also met up with a psyched team from Wales and some more guys from Scotland. So with all the eager climbers sending routes left, right and Rathlin (centre), it was easy to keep cranking and get loads of routes ticked. 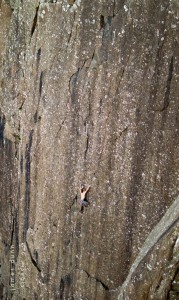 Me starting up the Immaculate pitch of "Primal Scream" E6,6b 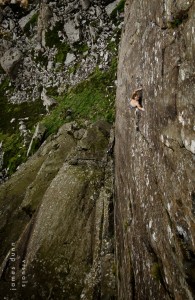 After the week of sun and 3 star dolerite wonder routes, the weekend arrived and so did all the other climbers for the Meet. It was a super fun couple of days, and Mountaineering Ireland did a good job of organising the event and getting everyone together.

On the Saturday night I had been asked to do a talk/slideshow on my climbing antics over the last couple of years. It was awesome fun to show and talk to everyone from all over Britain about what I had been doing and to pass on some of the everlasting psyche that seems to be following me around! 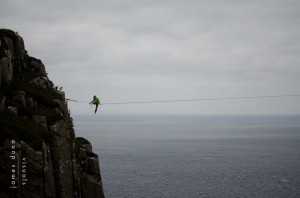 And so another addiction starts!

All in all it was an amazing trip and one of the highlights had to be meeting up with Nadeem Al-Khafaji and Pedro Pimentel who were on a mission to set up a highline above the Grey mans path, and boy was it impressive! Nadeem got the line sent both ways and in a result of this, got me super psyched to get into highlining. Cheers boys! 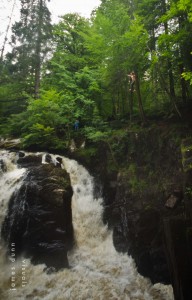 Feeling the exposure one the line!

Since the Ireland trip I have had some sporadic days away climbing between the awful rain we have been having this summer. A couple of trips up the NW and a few rainy-day Newtyle sessions have been had. Along with some highlining ventures and loads and loads of training, I have been keeping myself occupied, but the weather is getting to a lot of people in Scotland at the moment, so hopefully it clears up soon and we can all get out cranking asap! 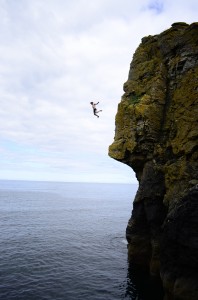