As Christmas is fast approaching, people are travelling all over the world to be home with their families. Ally Swinton (a good friend of mine) is one of these people, and last week he flew home from Chamonix in the French Alps to surprise his parents and to be home for the festive period.

As I had not seen him for nearly six months, the first thing I did when I heard he was back in the country for a week, was to call him and make plans to get out in the hills before he headed back to Cham.

So on Tuesday night we drove across the country to the Ben Nevis NF car park and kipped in my car, ready for some awesome weather and an awesome route the following day. When we awoke, the moon was still flooding the night sky with light and as we walked up onto the mountain we didn’t need to use our head torches, even on the forest section of the approach.

We walked up to No.3 Gully Buttress and as we approached, we could see the that routes were in awesome condition. We did the route “Sioux Wall”, which is another mega classic on the Ben. As it was only Ally’s second route of the season and his hardest Scottish mixed route to date, I offered to lead all the crux pitches, although his main pitch packed a fair punch!

We soloed halfway up the first/access pitch then Ally lead the section to below the 2nd pitch. I then went on to lead the very enjoyable wall pitch to the top of the first crack section (below the obvious corner groove) where there is an in-situ belay. We where following the summer route description in the Ben guide book, but a friend of mine who had done the route previously, said that the winter route splits the second pitch into two pitches.

So that is what we did, and once I had brought Ally up to the belay, he sorted the rack and set off up the corner pitch. After a good battle with the technical groove and icy cracks he eventually made it to the belay below the steep crack (crux) pitch, and brought me up.

I then ran the crux crack pitch and the continuation crack pitch together, the first crack section was a little strenuous to start but it soon eased off, although it remained technical and hard enough to stay interesting. Once I had pulled over the last tricky section I arrived on the large platform of “Number Three Gull Buttress”. I brought Ally up to here and he swiftly ran up the exit pitch of NO.3 buttress in the dark to reach the top!

It was good to get out in winter with Ally and now I’m super psyched to go to the Alps in January to get on some steep ice and Alpine routes with him.

Yesterday Mike Tweedley and I headed up to Stob Coire an Lochain to have a pop at the mega classic line “Unicorn”. We had talked about climbing this route together two years ago but had never actually got round to getting on it.

We arrived at the bottom of the route just as the sun was turning the Aonach Eagach Ridge a beautiful pinky/red colour in the light of dawn. After another technical game of rock, paper, scissors it was decided that I would lead the first pitch and that we would alternate leads after that.

I set off up the huge looking corner line hoping that there wasn’t going to be as much verglass in the cracks as there was on the Ben on Saturday. As I progressed up the pitch it was obvious that there was some verglass around, that made finding good protection more difficult than usual. Especially in the crux niche where the thin crack at the back had filled with rock hard ice which made it very strenuous to protect, as I had to clear the ice away before I could place any wires. So I opted for the bold option of placing one nut at the bottom of the niche and charging to the good hooks higher on the pitch.

That was a decision I soon came to regret, and as my left foot was standing on tiny rock crystals and my right foot was just jammed precariously in the V-niche, (which kept popping out and making me over grip my axes which sapped more of my energy), I prayed that my axe picks wouldn’t rip out of the very thin hooks I was yarding on. Always in the back of my mind was the fact that I was high above that one little nut in the icy crack (WHAT A STUPID DECISION!).

Thankfully they didn’t rip and after another 20 meters of climbing, I arrived at the first belay fairly unscaved, apart from being a little mentally drained from the crux section. I quickly set up a belay on the hanging stance and started to bring Mike up the pitch.

Once he was at the belay and we had sorted the gear, he set off up the steep second pitch and swiftly got into the motions of technical egyptians, big lock offs and raging calf bump/burn. This pitch was home to some amazing moves and very technical climbing. Not bad for Mikes second route of the season.

After my next pitch which also had some hard moves at the top, Mike lead the last short section under the light of an almost full moon, and once at the top of the route the whole of Glen Coe was lit up in the clear nights sky. This was the icing on the cake for me, I could have sat up there on those snow covered rocks in the still nights air for hours. But we quickly sorted our kit and headed down the easy gully (glissading) back to our bags.

Unicorn was an awesome line and it was good to get it done with Mr Tweedley after having talked about doing it in the past. What an awesome day!

Yesterday Tony and I headed up for some winter action on the freshly rhimed up buttresses of the North Face of Ben Nevis. We both had our own projects in mind and we agreed that a quick game of Rock, Paper, Scissors at the hut would decide on which of our two routes we would do.

We did this and the lucky Mr Stone won the game, so off we trotted up the hill towards the buttresses. When we were half way up, the wind and spindrift was starting to get very strong and it soon became apparent that the forecast weather of little winds and a high percentage of clear sky’s was not going to arrive and that it wasn’t a day for trying hard project routes in the mountains.

We agreed on another route,but as Tony started up this, I noticed that he was 20m up without a good/any piece of protection. He soon shouted down that the verglass was making it impossible to protect this hard route and that he wasn’t comfortable to press on without any good gear. I agreed and Tony then down climbed back to the base of the route.

We then decided to go and try a route that I had wanted to do for a while and Tony had done previously called “Cornucopia”. As it was getting late by this point we agreed that I would do the whole route in one big pitch and then rap off and strip the route, hopefully before it got too dark!

I stared up the route, and after fighting my foot free due to getting it well and truly stuck (mid crux), getting my eyes frozen shut numerous times, not being able to look at my feet without getting blinded because the epic spindrift and running out of good gear placements from the amount of bullet proof verglass on the route (more like trying to survive than actually climbing). I finely pulled onto the top and the proceeded to quickly rap back down and strip the route to a very festive/frosty looking Tony.

We pulled the ropes and retreated through the gale force winds and blizzards back down to the hut as quick as the deep snow would let us, while trying to avoid the unstable avalanche prone slopes on the way.

On the walk back to the car and once we were out of the wind, it turned out to be a lovely decent due to the almost full moon beaming down on us and lighting up the path and forest trail, meaning we didn’t need to use our head torches on the entire decent.

It was then back home for the Christmas party on Sunday and back out climbing again on Monday! 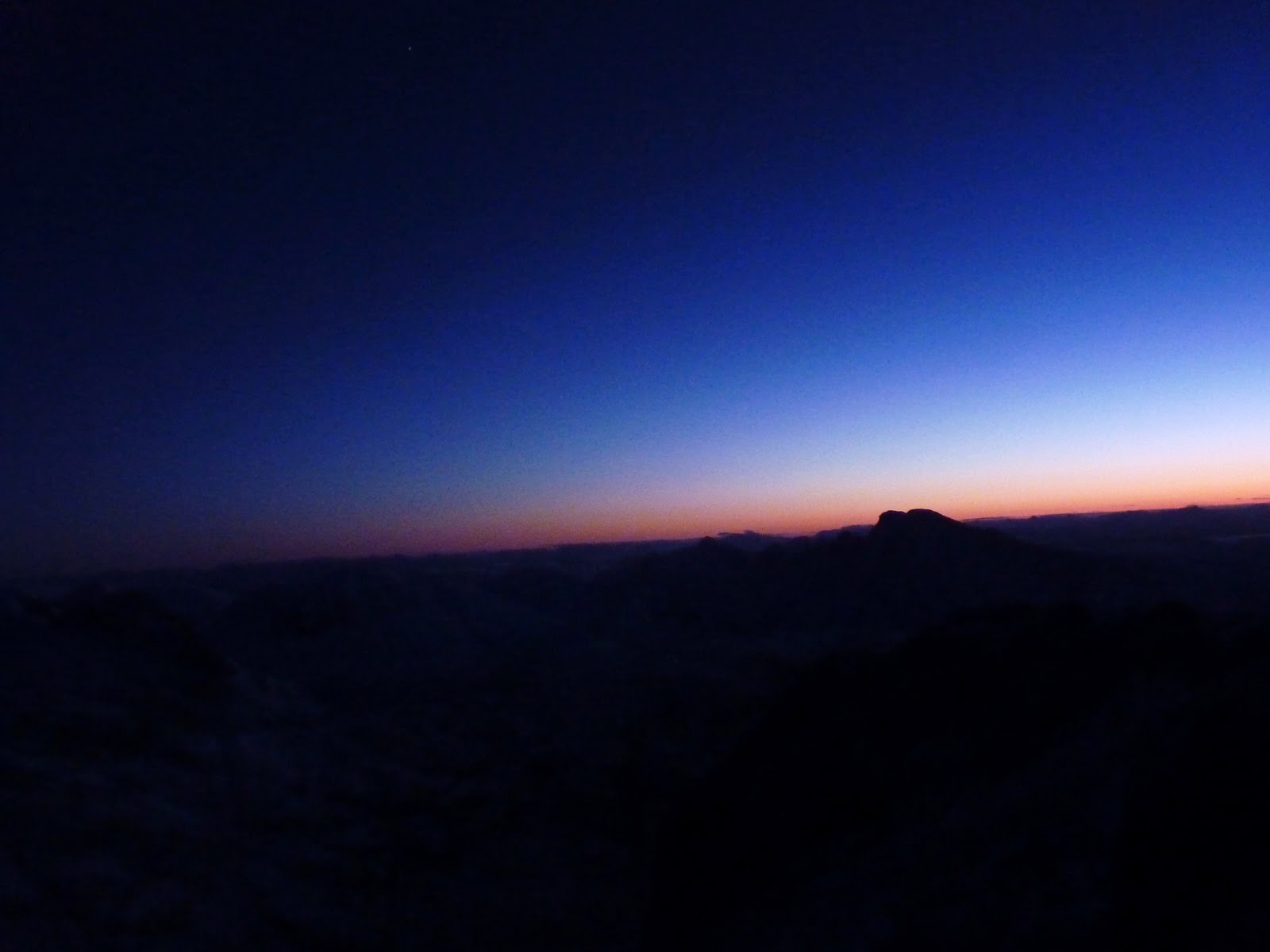 When the alarm rang at 3am the stars where still out in full force and there seemed to be very little wind. I could tell it was going to be a good day, as we ate some food the thought of the up and coming days antics was giving me butterflies in my stomach. Once we were kitted up and ready to go we started walking along the path towards the Cuillin Ridge, while all the time the big looming buttresses in the surrounding area where just visible in the pitch dark and seamed to be looming down on us from above. 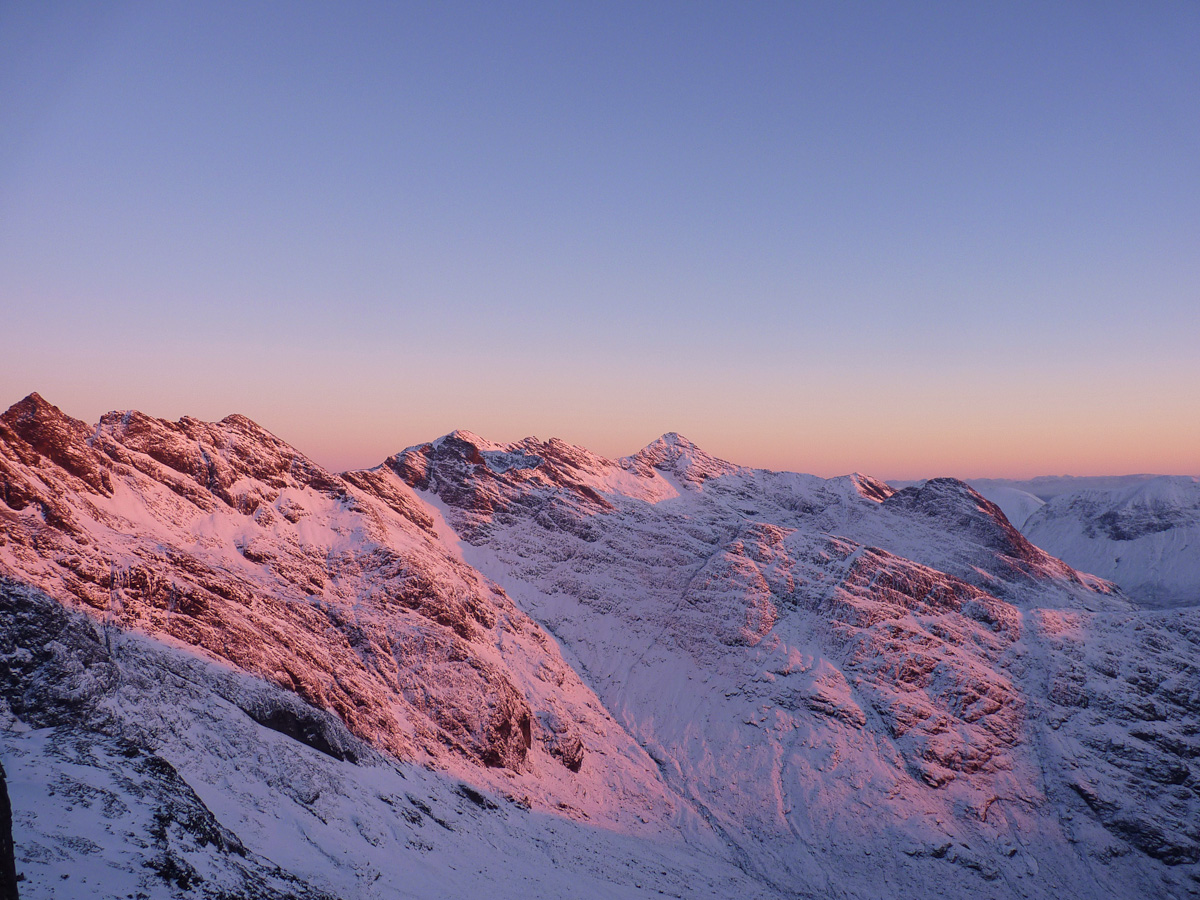 As we reached the top of the ridge the sun was just starting to rise above the hills and this gave us the opportunity to scope out our decent and observe what routes where in winter condition. Unfortunately our intended routes weren’t in nic, but one of our back up lines was!
We did a route called “Black Cleft” which hadn’t had a winter ascent before. Even though it was a last hope option the route was totally awesome and gave a good variety of wall climbing and winter chimneying. The route was sustained but never super difficult so we decided to give it VI/7 *** and we both agreed that it was one of the most enjoyable routes we had done in a while.
Guy approaching the route 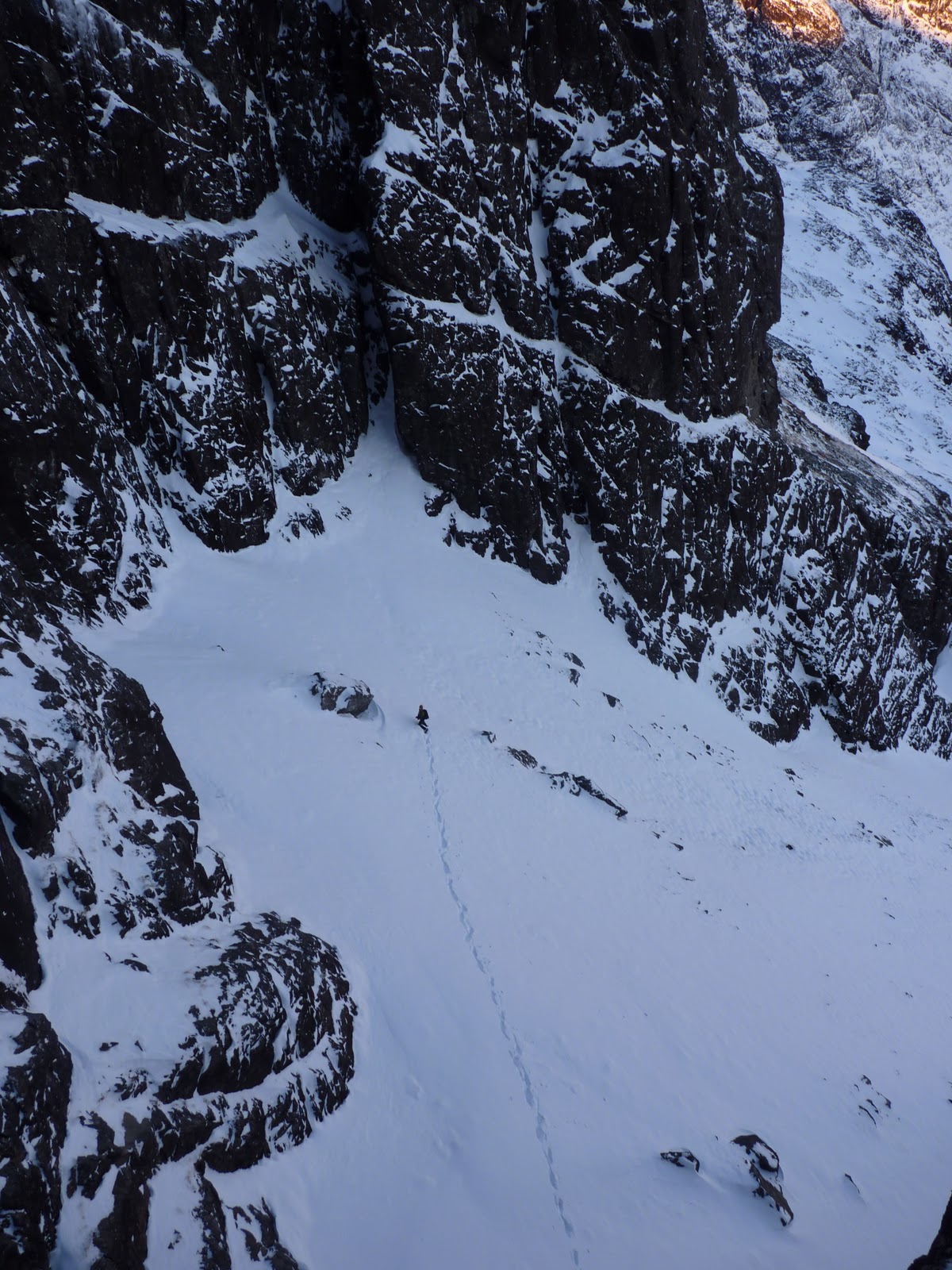 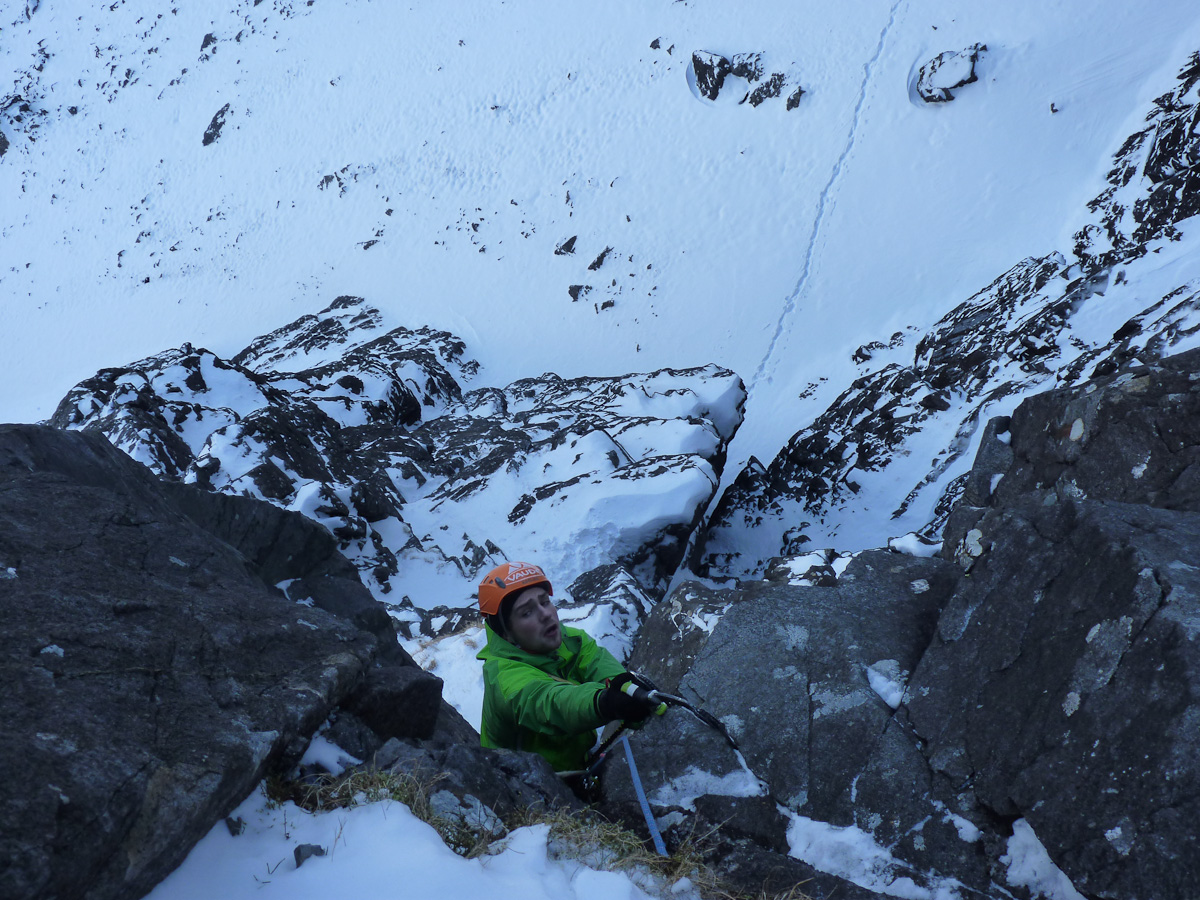 Above; Me pulling over the last roof exiting the chimney
Once we were back on the ridge we sorted our kit in the beaming sun with a spectacular view of the Scottish islands and the Cuillin ridge with its surrounding mountains. We took some pictures and then set off on a leisurely decent back to the car whilst the sun set behind the Isle of Rhum. 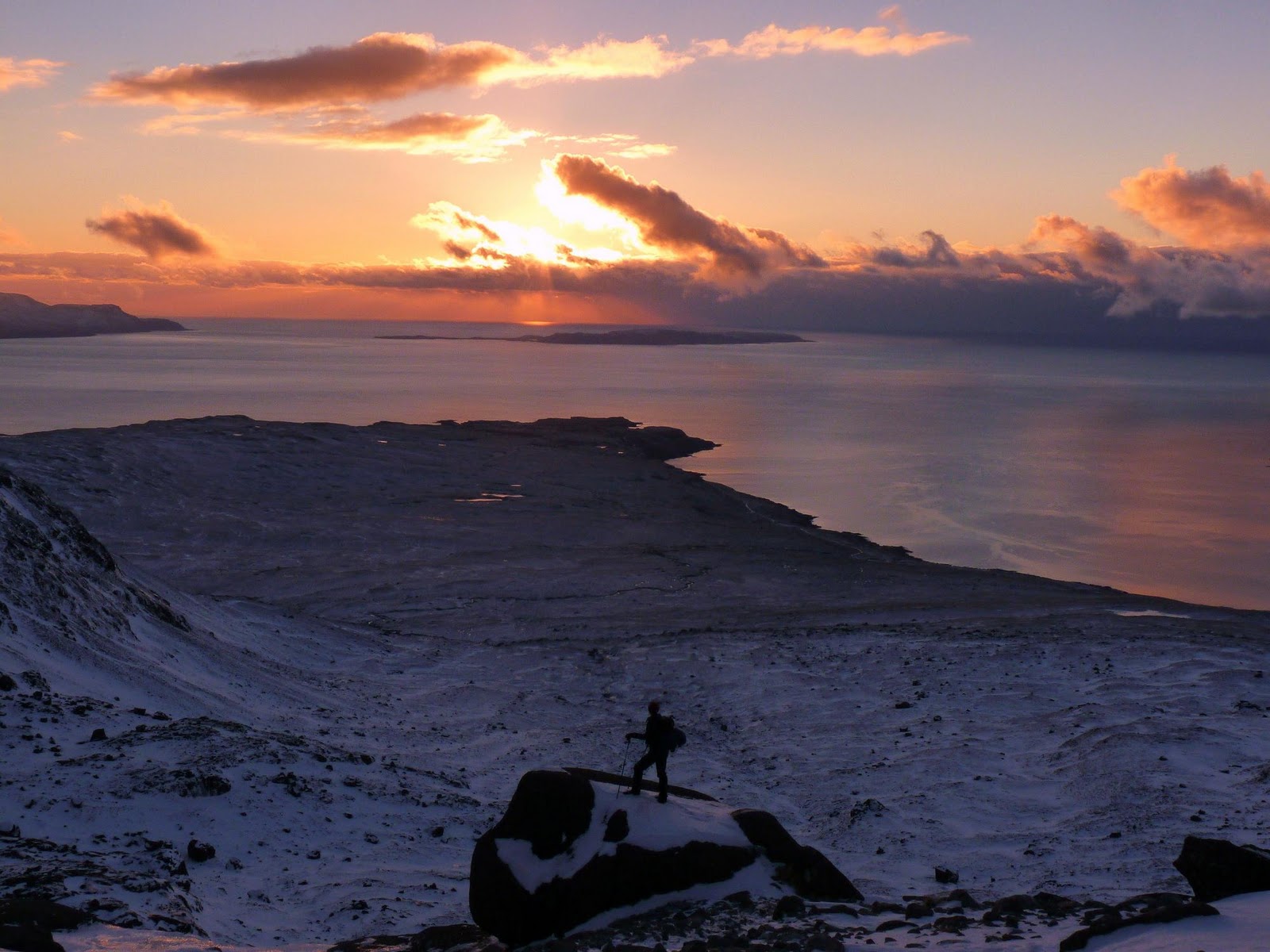 We arrived back to the car as night was just setting in and we were both pleased to be back before it was dark and to get going swiftly so it wasn’t to late on the drive home. Unfortunately my car battery wasn’t playing ball and my car was struggling to start. After a lot of swearing and persistent turning of the key we realised that nothing was happening. We where literately in the middle of nowhere and there was only one house within 5 miles of us……. so off we walked. Thankfully there was someone home and the local farmer was very friendly. After asking us all about our days climbing and telling us stories of his current adventures he gave us a jump start and the car was ready to rock.

The roads where still free of snow and we got back to Inverness in very little time, I dropped Guy back at his car and headed to my friends (James Dunn) house in Aviemore. I slept there last night and I’m about to head west again to Fort William to climb on the Ben tomorrow. Hopefully it will be as good as our day on Skye.