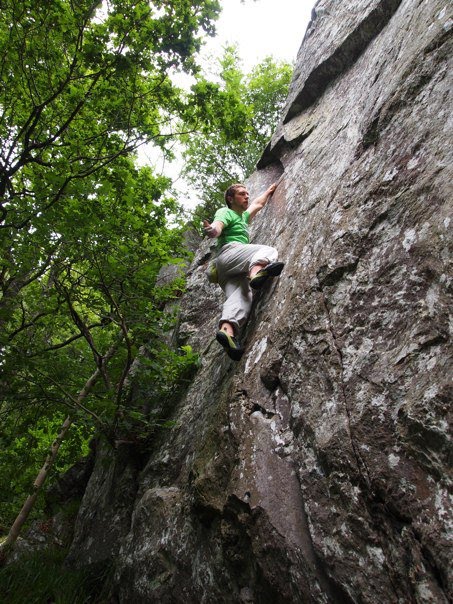 Yesterday Michael Shorter and I head to Dunkeld, except this time we headed to Polney. I have not done much climbing at this crag so there was lots to go at for me, and Mike was trying to tick off the rest of the routes he hasn’t done there.

Even though the weather forecast was for rain showers throughout the day, we managed to avoid getting wet. Between us we got a handful of routes done of all grades and I got to spy some routes that I would like to go back for.
Mike did two E2’s, soloed an E3 he had done previously and did an E3 called “Springboard Variation” which packed in a heavy punch on the crux section.
I did “Crash test dummies” E3,5c, then I soloed “Psoriasis” E3,6a, after some lunch I did “Hot Tips” E5,6b and finished off the day with an easy solo of “Ivy Crack” VS,4c. It was a fun day and thankfully the rain stayed off and we got our planned routes ticked.
As I’ve managed to find a job for a few weeks, I am going to have to do what most people do and wait until next weekend to get out cragging again. So lets hope its a dry one!

Today Mhairi, Andy and I headed up to a very sunny Dunkeld, this made a change from the wet and windy Isle of Lewis that I was visiting last week.

Below: Mhairi on Squirm. 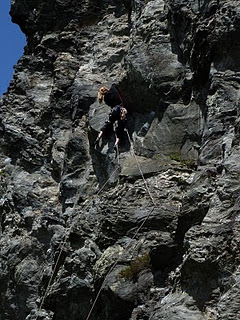 We all had things we wanted to get done and due to the awesome conditions we all got our intended routes ticked.
Below; Me on “Lady Charlotte” 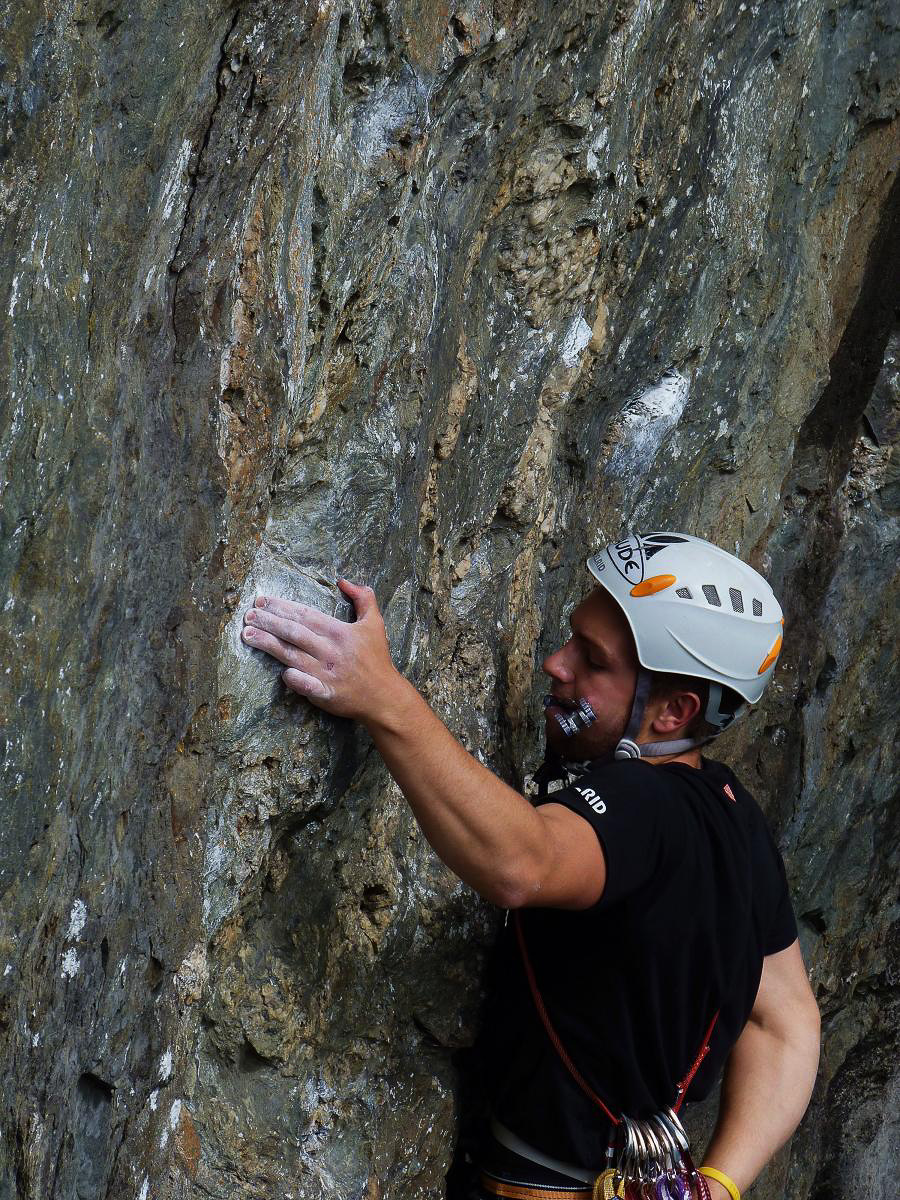 Mhairi did the classic E1 “Squirm” to start. I then went on to solo the E1 “Deaths Head” to get warmed up and get my head in gear for my intended route later in the day. 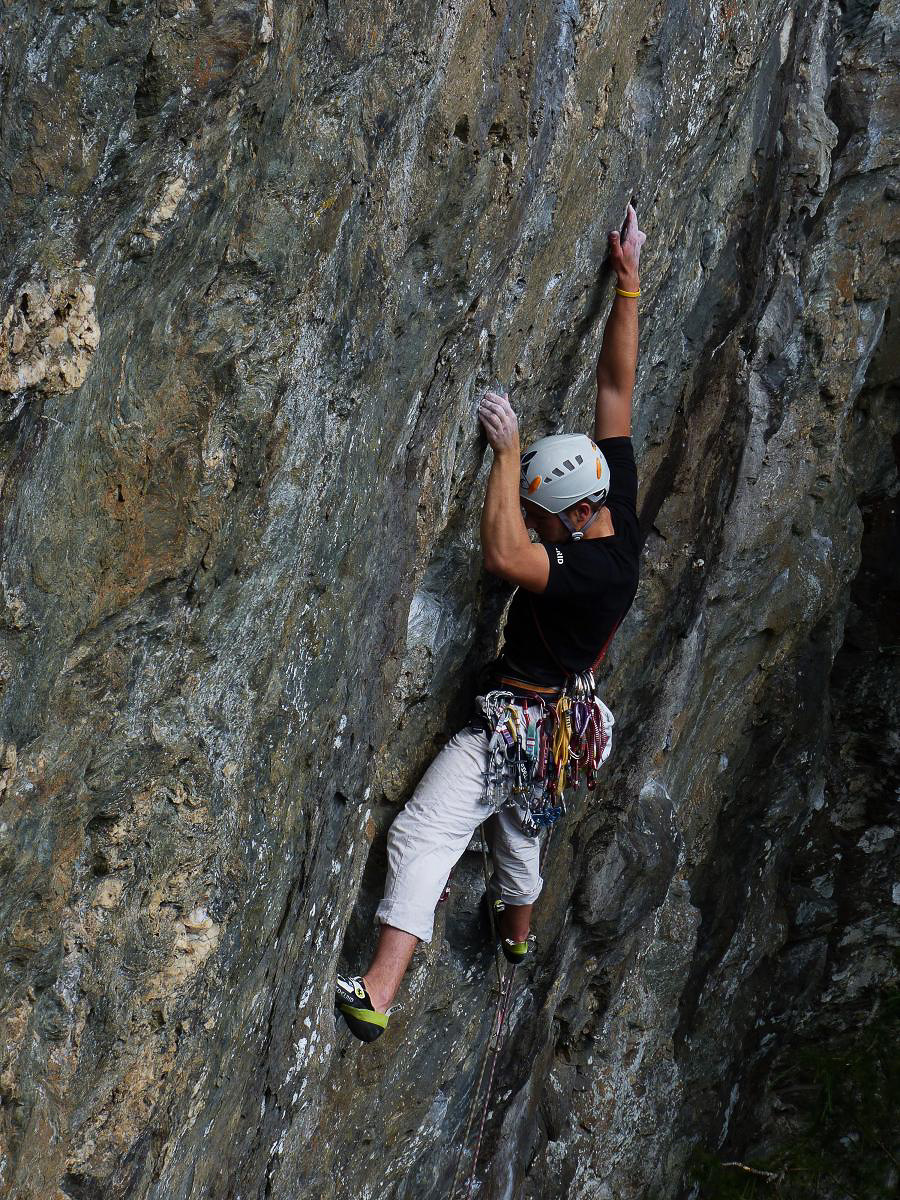 Andy did the direct start to Squirm, “Squirm Direct” E3, 5c, and then in the afternoon I got the three star classic “Lady Charlotte” E5, 6a. Which was home to some sustained climbing with just enough kit to make it safe, but you had to look for it.
Bellow; Me on E5 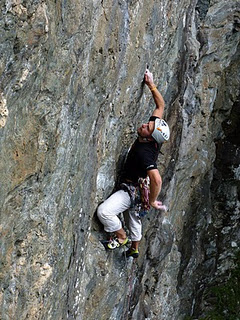 As the sun was still high in the sky, Mhairi decided to give her project “Silk Teddy’s”7c one last shot before we headed home for the day. She cruised up to then through the crux and styled it all the way to the top. With a beaming smile on her face she retrieved the draws and then we headed back to the car in high spirits.
It was a fun day and as always, Dunkeld offered some amazing climbing for everyone to enjoy. Truly a three star venue! 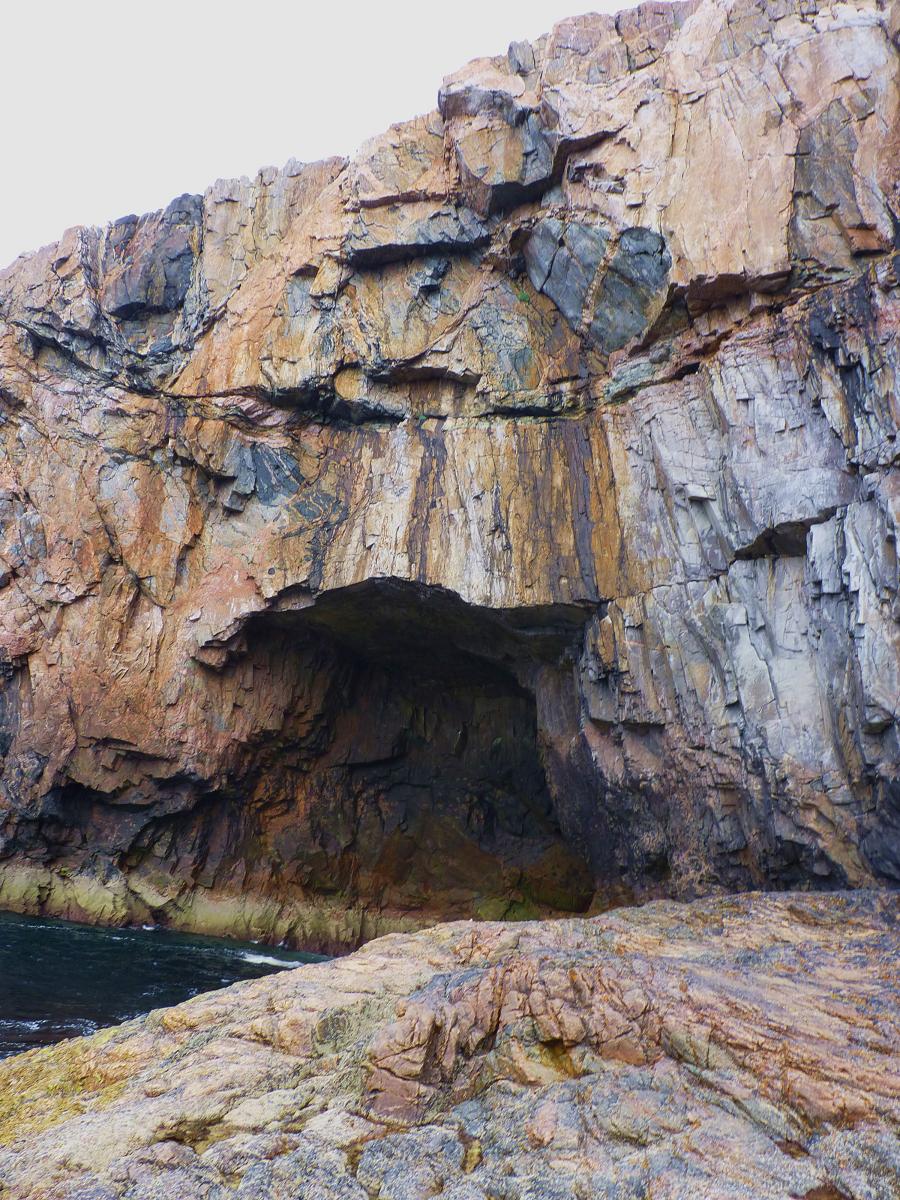 For the past few days I have been on the Island of Lewis in the Outer Hebrides. The weather has been on and off with rain, but when the rain is not falling the sun has been out and the views and scenery are spectacular.
Even though I am away with my family, I have managed to get a few days of climbing and the routes I have done have been top quality! The first venue I went to was Dalbeg, I climbed the 4 star route “Neptune” E2/5c. This was an awesome line, but the harder routes to its Left on the main face look totally amazing and I will definitely be returning for some of that action.
Bellow: A spot of post route fishing 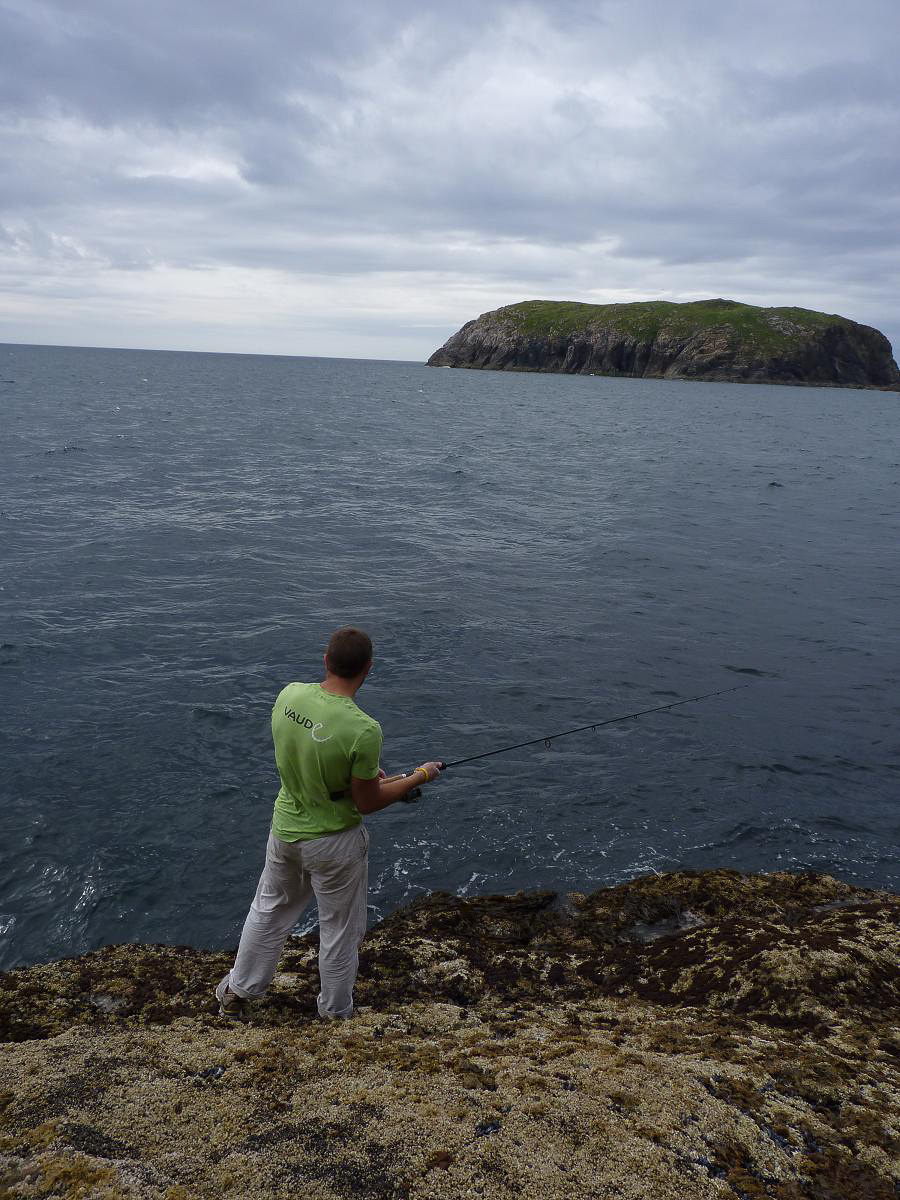 Yesterday James and I ventured over to Mangersta, this area has some breath taking views and the climbing and situation is second to none. I did a route called “Killer Fingers” which is a 3 star E5/6a and the route was home to some funky steep moves with a smeggy/damp crux (which is always good value on the onsight).
Below: Me on “Killer Fingers” E5/6a 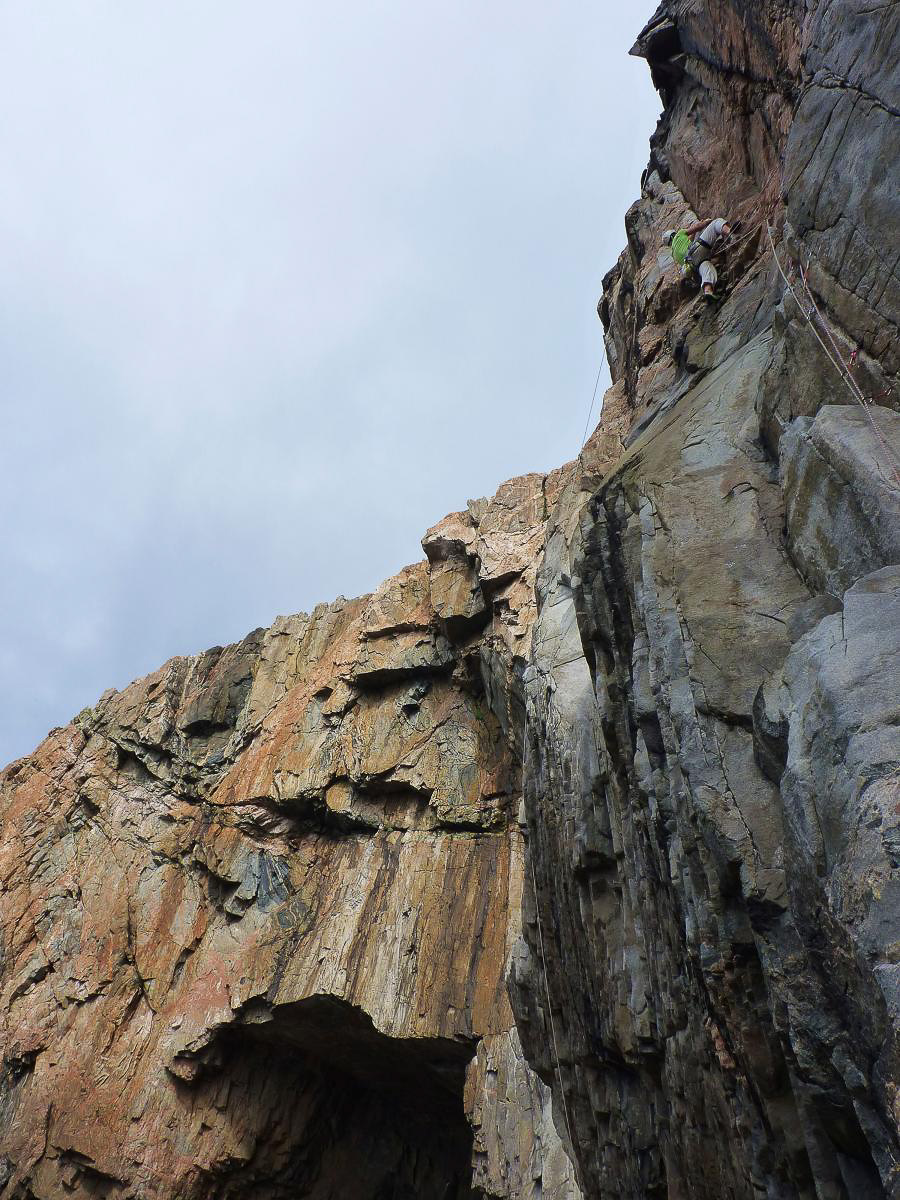 With the rain coming down again today, I have opted for the touristy family time option and will hopefully get out again tomorrow and Saturday when the weather improves.