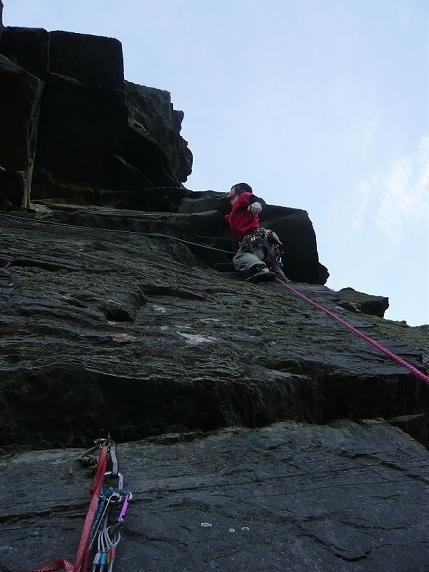 Today James, Damien and I headed up to Earnseugh for some early season trad. We only did a couple of routes, Pterodactyl E2 5b and Bats Belfry E2 5C. But we got the chance to check out some of the harder routes for later return trips.

Top-Me just swinging round the
roof into the steep crack 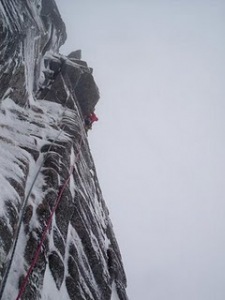 Below- Damien on the second pitch
of Stirling Bomber 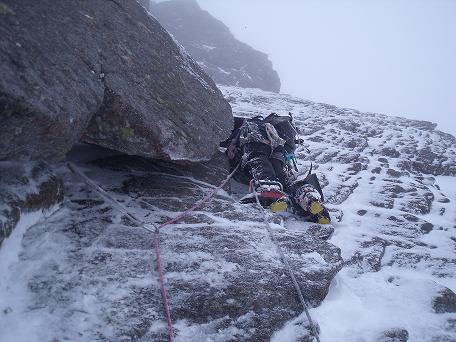 Today the wind had died off a lot and Damian and I headed back into Coire Sneachda to a very white Fiacall Buttress. We did two amazing routes, the first was Watch Out VI/8 which I lead. The route follows the start of the seam to the big roof, then you travers under this to the right arete. After chilling out on the arete for a bit you swing into a very steep and pumpy overhanging crack which is too wide for axe picks but you need to get baggy torques to ascend it, which was tricky to say the least when there is very little for your feet. After a battle up the crack you make teatery moves to gain the left slab and do some easier but still hard moves to gain the very inviting platform at the top of the Seam.
We then walked back to our bags and headed over to The Stirling Bomber. I ran up the easier first pitch to a good stance below the intimidating chimney. Damian then put in a awesome effort to climb the awkward thrutchy chimney which was tricky due to the amount of snow on the right wall hiding all the foot holds. But regardless he made it to the top with not too much bother and after I had seconded we headed back to the car and down to Aviemore for a well deserved coffee. It was a good couple of days and I just hope the conditions don’t get totally striped with the warmer weather that is forecast.

Today Euan and I climbed the well renowned White Magic Crack. It was very windy today but the quality of the climbing made up for the bad weather. Euan lead the First and Third (crux) pitches and I lead the Second and Forth Pitches. It was a good day and the conditions look good for tomorrow. Unfortunetly my camera battery died on the walk in, so no pics of the route.