So the last couple of weeks have been interesting. At the end of January I was helping with some on the hill training for Tiso staff on loads of awesome products from Scarpa, Grivel and Deuter. It was cool to get out on the hill with all the psyched staff and give them a bit of an insight as to what it’s like to use the gear for what it is made for. Although the weather was mostly pretty grim over the four-day course, we still managed to find some snow and “winter” to test the gear and keep things interesting.

Then it was a quick blast home for the Edinburgh Mountain Film Festival, at which I was presenting at on the afternoon of the 4th of February. It was a good day and I really enjoyed the laid back yet very professional feel of the festival. My talk went well and It was nice to chat to lots of people at the end of the session about my stories and yes… mostly the bear thing!

Straight after the EMFF session I jumped in the van and headed for Glen Coe, where I was meeting up with some guys (and girl) from the Rab USA team for a week of climbing, filming and general hilarity.

Over the next 7 days, we did some awesome routes, shared some good adventures and stories but mainly it was cool to make some new friends along the way! The week was getting filmed by Coldhouse Colllective for Rab and Hamish Frost was on photography duty. I’m really looking forward to see it all pieced together in the end product. 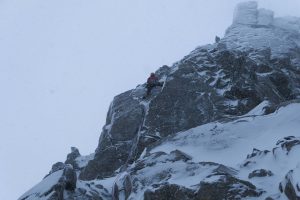 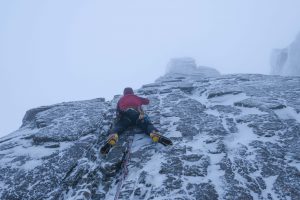 On Sunday the 5th we headed up the Ben, as winter had finally decided to show its face again! I was climbing with Jon Frederick, who is the Rab USA marketing manager, and he was keen to take a look at Babylon on Number 3 gully buttress, as he had spied it the previous day when they were up there. I was happy with this, as I had climbed the route a couple of times and knew how much fun it was and how he’d enjoy the upper pitch’s. Jon lead us up to the big ledge after the Gargoyle Wall cracks, and it was also cool that Stuart Lade (who had been helping Guy Buckingham with film safety logistics) managed to jump on the second rope and join us for the days antics. Stuart and I seconded up to meet Jon on the ledge, and as the first two pitches had been climbed direct to this point, the obvious thing was to continue straight up from the ledge instead of traversing out right into Babylon’s last pitch. 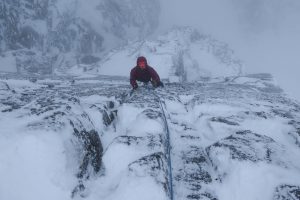 I tied into the sharp end and headed up on amazing hooks towards what looked like a thin seam beneath a nice garnish of hoar-frost. There was a wide crack above me and a flake-type feature to the right of that, but right again was where I was headed. The thin seam had caught my attention up the otherwise featureless section of wall and I knew it would be home to some fun climbing. 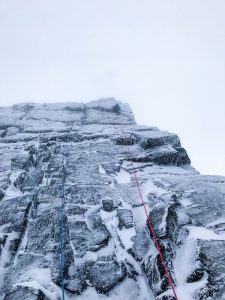 Me moving up to the seam on “Hanging Garden” 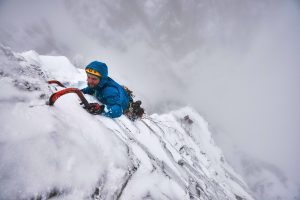 The pitch didn’t disappoint, and even after the steep techy climbing up the seam, the route didn’t let up. I had to stay tuned in, as the rounded/slopey features at the top kept me from relaxing all the way until I was literally stood on the belay ledge. Jon and Stu seemed to enjoy the pitch as well and after we had had a laugh with the camera/film crew at the top, we scuttled down to our bags and headed to meet the others at the CIC Hut.

We bumped into the legend that is Simon Richardson in the hut, and it was cool to hear that the linkup and top pitch we did was a new line, so it was cool to show team USA a proper adventure day on the Ben.

It turns out the wide crack above the ledge that I had spied left of our line had been lead in 2007 by Es Tresidder on the international meet, and called “Rok of Ages” VII/7, but our line up the seam (to our knowledge) was unclimbed. We called the route “Hanging Garden” and settled for VII/8 with the difficulties being up the seam to the top.

The next day saw the USA guys and film crew head off to do some interviews with the legendary Myrtle Simpson, so I headed for some extra training at Newtyle Quarry with Scott G. We had a fun day, and I was psyched to be feeling fit on the steep 40m+ routes in the cave. I managed to climb every route in the cave, including the full extensions and all the linkups in the session. I was psyched with this, as I felt reasonably ok at the end (apart from sore hands). I had failed on the last route trying this a few seasons ago, but it was good to complete the goal feeling like I still had a bit left in the tank. Roll on some winter projects!

The next day was a trip into the Northern Corries and Lochain was wearing its full winter coat for all to see! I love climbing in Coire an Lochain, and although I have nearly climbed every route (including most of the space on the buttresses for new lines) in the corrie, I still love heading in for a day’s adventuring at this awesome venue.

As the USA athletes headed into the base of the routes, I shot up the ridge with the film crew to help get them set up and get ready to abb down the lines of “Savage Slit” and “Fallout Corner” in prep for the climbers to be filmed as we climbed up. I then rapped the route to join the hilarity that was going on at the base of the buttress.

To start with I climbed with Angela Vanwiemeersch on “Savage Slit” and she cruised the route, leading it in one pitch. After I had seconded up and we had chilled at the top for a bit, we thought we’d better abb down and see how Jon and Fabrizio were getting on on “Fallout Corner”. 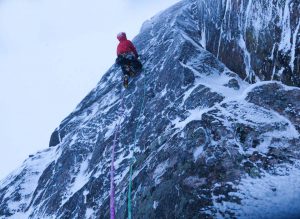 Me leading the crux pitch of “Intravenous Fly Trap”

Jon had lead the first pitch and they were both on the belay ledge trying to decide whether to continue up the route, as it was 4:50 and the late start and filming faff had eaten into our precious winter daylight hours. Fabrizio decided to rap down but I could see the glint of not wanting to descend in Jon’s look, so I offered to lead the route to the top for him to climb on second. This is what we did, and it was fun to climb a route that nearly ten years prior had taken me the best part of the day to reach the top. This time I managed to get from the base of the buttress to the top of all three pitched is less than 15mins. It’s crazy how one route can feel so different on two occasions.

Jon topped out with a big grin on his face and I think he was happy to have a rope above him as the light faded and the climbed wasn’t letting up! We rapped down to join the others and headed out of the corrie to meet up with the film crew and back to Aviemore for a mountain of take-out curry! The best way to end a good day in the hills.

The next day the Rab guys headed to the NW for a night in Shenavall Both and I caught up with Scott G for another day in Lochain.

It was crazily windy on the walk in to the crag, but I assured Scott that the routes should be sheltered from the SE gales. Thankfully they were, but the wind direction was dumping snow into the corrie all day which created an interesting environment to be in!

We were trying a new line on No.1 Buttress area, and all the time we were climbing, there was some pretty big avalanches booming off either side of us on the other faces of the crag. I knew our route was nice and sheltered, but I also knew we had to get out of the corrie again later that day, which I was not looking forward to at all! 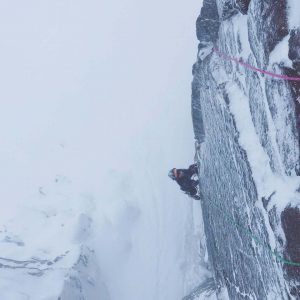 I battled my way up an awesome new route left of the big corner of “Big Daddy”, which was bold and super techy at the start and a little less bold but more difficult in its upper half. As I was belaying Scott on the second pitch, the light was fading and through the darkness I could hear boom after boom of fresh cornices giving-way from the top of the cliffs. I was wishing we had brought our bags up with us, as exiting from the top of the corrie was by far the safest way to get back to the car. But we hadn’t, so we finished the route and abbed back to our now buried gear stash at the base of the climb.

Not wanting to hang about, we stayed roped up and Scott clipped into the belay from earlier. I moved down the loaded gully (lower slopes of The Vent) under the buttresses and found a fairly sheltered outcrop to hide under whilst I brought Scott safely to me. I quickly shoved a cam into a crack and clipped in for good measure. As I was bringing Scott down to me I heard another big boom as a cornice let go and I was thinking that I really wanted to get out of the corrie as quick as possible. Before I had time to do much more thinking a wave of snow slammed into the back of my head that was sticking out above the rocky outcrop, I have never been so glad to have been curious and the cam I had placed stopped me from being ripped down the steep slope into the darkness by the huge mass of snow.  After what felt like minutes, but was probably only seconds, the sliding snow started to ease off and Scott came running over shouting to see if I was ok. I said “yes but lets get the F**K out of here”! We spent the next 30mins negotiating scary slopes and eventually made the sigh of relief when we reached the unloaded ground of the boulder field. We kept moving though in case any more pesky cornices decided to sucker punch us in the back of the head. 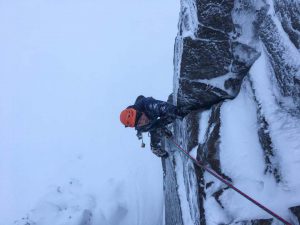 On the way back to the car we made the usual light awkward conversations that people make when they are trying not to think about how scared they had been less than an hour before. But between us we did manage to come up with a name for our new route that was in keeping with both genres of existing lines on that buttress. “Intravenous Fly Trap” X/10, felt like an good addition to the corrie and it was cool to get up a line I have been looking and thinking about for years now. It was also fun to put all the training I’ve been doing this year to good use, but I could have easily done without the scary snow!

The next couple of days were spent with the Rab guys and film crew. It was a good laugh and had turned out to be an awesome week. Yet again, the good winter conditions didn’t hang around very long and it was back to training for my next adventure to Switzerland on the 17th. So watch this space for some more, hopefully just as successful stores in the near future!