Over the past four days, Nick and I have been into the Stanley Headwall three times. On Tuesday we drove to the Headwall car park early and ready for action. There had been more snow come down overnight than we had hoped, and the wind was blowing hard again. We looked at each other in the dark car park and as the jeep was getting buffeted by the wind, we both knew what the other was thinking, No Deal! 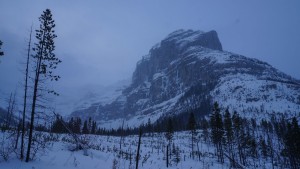 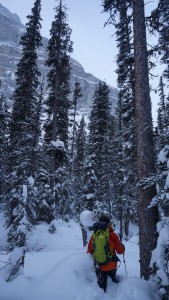 Nick trail bashing through the woods. 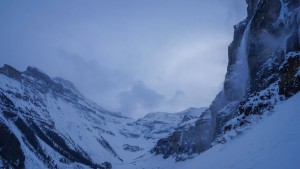 An atmospheric Headwall with spindrift pouring down most of the routes.

We put our seats back and decided to get a couple more hours sleep before leaving the kit in the car and heading up through the fresh snow to put in a trail for the following day.

As we reached the mouth of the Headwall, it was obvious that we had made the right decision. There was spindrift pouring down our intended route, and the wind would have been horrible to climb in, let along stand on a belay ledge willing your hands to come back to life. 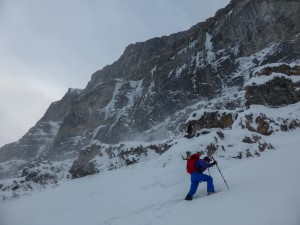 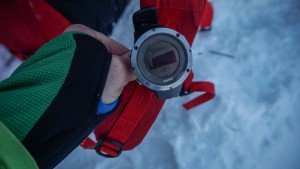 A cold morning for climbing

We romped up the the top of the approach in our snow shoes then took them off and walked back to the car, putting in a good track on the way down for the next morning.

The next day was very different. The in-car temperature gauge read -28’c on the drive up and when we had reached the top of our trail, it was a chilling -17’c still, but there was no wind. The spindrift had stopped and it was replaced by glowing beams of red as the sun rose behind the surrounding mountains. 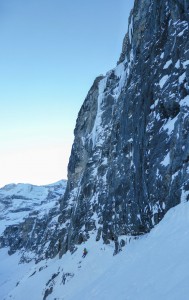 Me trying to stay warm whilst traversing to the route. The belay jacket is already on! Credit. Nick Bullock

Gearing up was hard, but as there was no wind and by the time we had traversed to the base of the route, I felt warm enough to get stuck into some steep and pumpy mixed action. 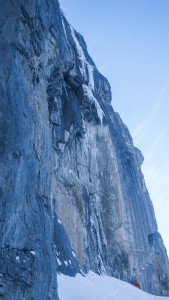 Pitch one of “Dawn of the Dead” taken two days after we climbed it when we returned to the Headwall. 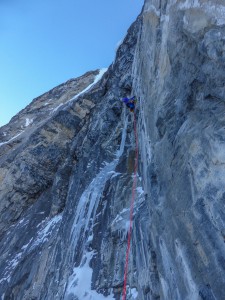 Me on pitch one of DOTD. What a pitch! Credit. Nick Bullock 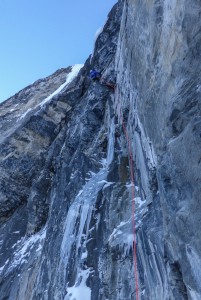 Me moving through the roofs on DOTD. Credit. Nick Bullock

We did the route “Dawn of the Dead”, which has an amazing 40m steep and technical first pitch that takes in some face climbing, roof pulling and super lean and thin ice teetering higher up. After that there is a whole load of steep and technical ice climbing to be done and as the ice hadn’t seen any action this season yet, it was very engaging to clear and climb. 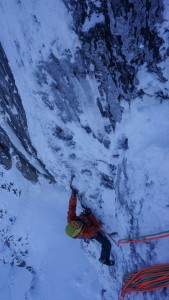 Nick seconding the top of pitch one of DOTD 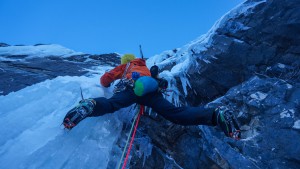 Nick leaving the belay on the steep and tech WI6 pitch. 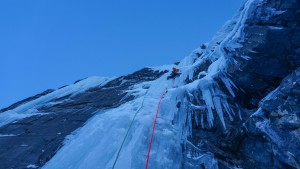 Nick higher on the WI6 pitch

The route was really fun and I was super psyched to get on such an interesting and varied climb. It goes at M8+/ WI6, 140m, and I’m told by locals, that It has spat off a fair few climbers over the years, so I was psyched to get the onsight on this striking line, despite having to have a few stern words with myself when I was teetering about in the very thin and brittle ice high on the first pitch. 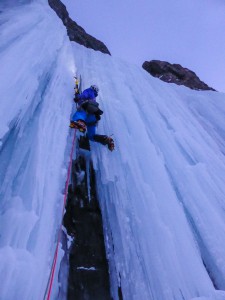 Me moving up the last steep ice section as night closes in. Credit. Nick Bullock 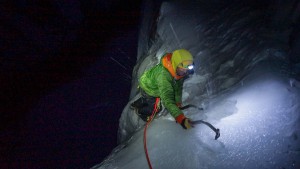 Nick reaching the ledge by headlamp and moon light.

After sending the route we stashed our gear and headed back to the Alpine Club Hut, ready for some food and sleep. Mmmmmm luxury!

The following day we chilled out, and yesterday we headed back to the headwall for another amazing adventure. This time on the neighbouring route “Nightmare on Wolf Street”. This is two big steep ice pillars, started and intersected by mixed rock walls. 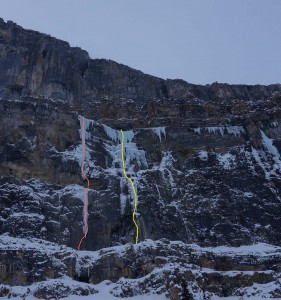 The two routes. Dawn of the Dead (Right/yellow) and Nightmare on Wolf Street (Left/red). 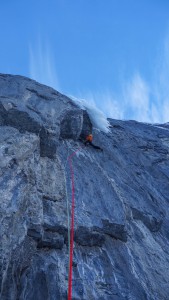 Nick making progress on the first pitch of NOWS. 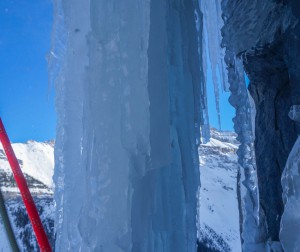 This ice on pitch two of NOWS 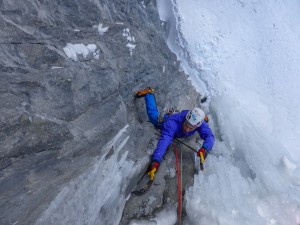 Me reaching the belay on pitch one of NOWS. Credit. Nick Bullock

Nick took the techy first and second pitch along with the short but steep fourth pitch, and I took the steep and burly third through the roof and the long and sustained fifth pitch up the last ice pillar. 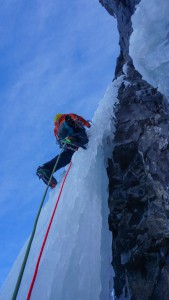 Nick moving up the pillar on NOWS 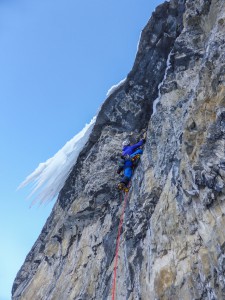 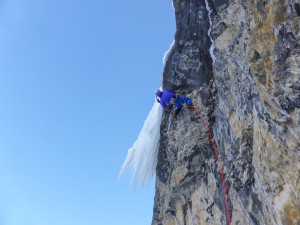 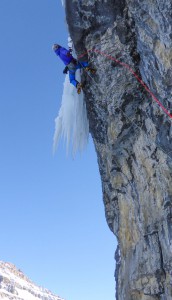 Praying that my axes won’t rip out of the wafer thin ice. Credit. Nick Bullock

This was another outrageously good route and it’s amazing how many world class lines the Headwall has to offer. I can’t wait to go back sometime in the future for some more mixed madness! 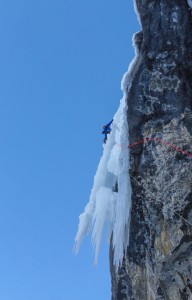 Moving up the WI6+ section on pitch 3. Credit. Nick Bullock 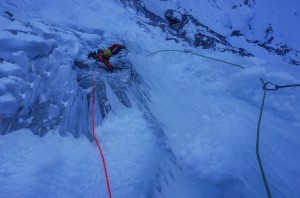 After traversing the top ledge to reach our already equipped abb stations on Dawn of the Dead from Wednesday, we rapped down then plodded back to the Jeep with beaming smiles on our faces. 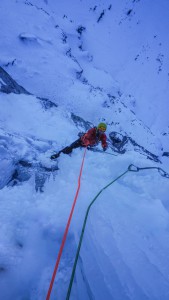 Nick on the WI6+ pillar on the third pitch of NOWS

You couldn’t ask for two better routes in the mountains, and we’ve still go 8 days left in Canada, so lets see what else we can find. 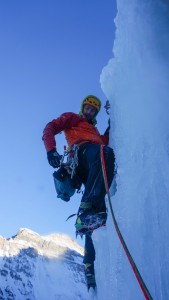 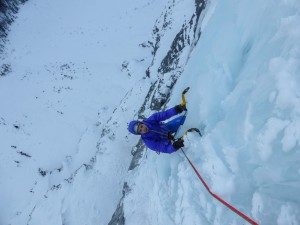 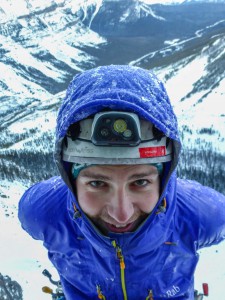 On the belay after getting glazed with freezing water on pitch four. Credit. Nick Bullock 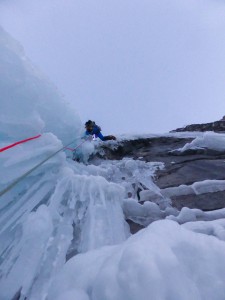 Me starting the very long and sustained top pitch of NOWS. You definitely get your ice grade for this pitch in virgin conditions! Credit. Nick Bullock

2 thoughts on “Thankfully No Horror Shows On The Headwall”