There’s been a big gap since I last wrote a blog post, and a lot has happened since then. My winter season died off fairly rapidly after climbing Banana Wall. I felt it best to end on a high, and I was well and truly mentally drained after a few weeks of demanding routes in the Scottish winter wonderland. It was time for the rock and I was also ready to ride my bike! 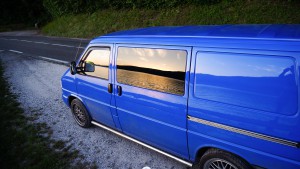 The sunset over Lac d’Annecy reflecting in my van window

I did a lot of mountain biking over the summer, and even though Mhairi and I headed off to France for 5 weeks with the steeds loaded into the van, I was still very psyched to get loads of rock climbing done whilst I was over in the Alps. Unfortunately I ended up taking a pretty tasty fall off my bike early in the trip, which involved a hefty bang and cut to my shoulder. This put climbing on the back burner for a while, as I wasn’t able to lift my arm above 90 degrees. I was however, still able to ride my bike, so all was not lost. The rest of the trip turned into a tour of bike resorts and ended with Mhairi and I taking part in the Megavalanche enduro race situated in Alpe D’huez. If you don’t know what the Megavalanch is, I suggest you type it into youtube and take a look at some of the videos. It’s a pretty alternative event, to say the least. 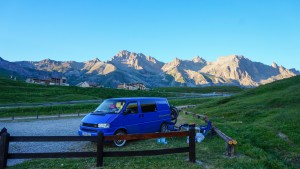 Kipping for the night after coming over the Col du Glibier.

The startling for the Mega Ladies

This was an awesome event and the atmosphere was second to none. We met loads of cool people and made some amazing friends. It was the perfect way to bring an end to a fun filled summer of exploring in the van.

The UTROV in all its glory

The other big thing I did this year was… I got a job! Duh Duh Duhhhhh. This is a pretty scary concept for me, but I did it. Having worked on and off at the farm for the past 5 years was good. It let me save money for the winter season and to go on the odd climbing trip, but it was never really a reliable income. So when the opportunity to work offshore with an ROV company crossed my path, I couldn’t really turn it down. I got a job with Utility ROV services in the spring time as an ROV pilot and technician, and up to now, don’t regret it in the slightest. I’m currently doing a 5 week on shore (off work) then 5 week off shore (working) regime. It seams to be working well and even though I have to train mostly in a crappy gym and do lots of core and pull-ups whilst I’m off shore, It pays off with having 5 weeks of free time to climb and do what I want, and with better access to funds to travel around the globe in search of new and awesome climbing venues. 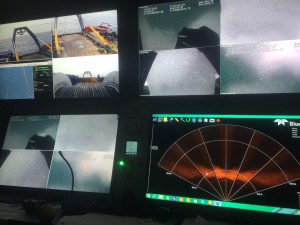 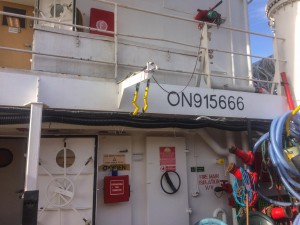 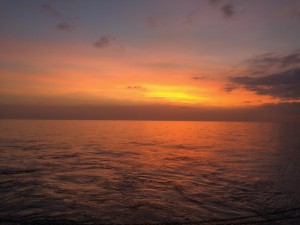 Some nice views from the ship

As well as the new job, there are two other big changes that have popped up in 2015 so far. Firstly is that I am now fully sponsored by Rab clothing and equipment. I’m stoked to have the opportunity to work with Rab, and it is awesome to be associated with a company that was founded in your home country. I’m keen to see what we can offer each other and put their stuff through its paces this winter. The second thing is that Mhairi and I have moved to Peebles in the Scottish Borders. It’s brilliant being in the Tweed valley, the community and landscape is awesome and we’re both loving having the endless trails and hills on our doorstep, and I find it the perfect place to chill and explore when I’m not away climbing or working. 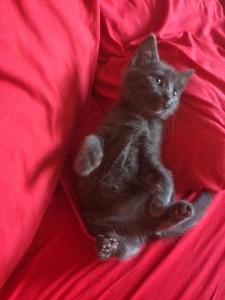 Luna, the latest addition to the family. The craziest kitty I’ve ever met! 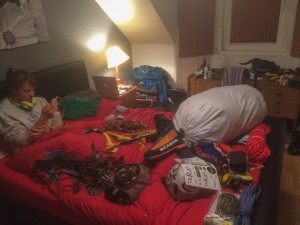 Packing for Canada after a flying visit home

I am just back from a 5 week work stint on the ship and after a couple of days at home seeing Mhairi and my wee kitten, I’m now sat on a plane to Calgary, BC, Canada. Psyched!

I’m meeting up with Nick Bullock who is already out there after spending a month in Banff writing and making the most of his scholarship that he received for his ever developing writing career. We are both psyched for some big, cold and icy adventures, so lets hope the weather plays ball for the next three weeks. I’m sure we’ll find something interesting to do! So keep an eye on my blog for regular updates over the next few weeks whilst we’re out and about in the Rockies.