Well I didn’t think I could beat Mondays outing in the Scottish hills, but yesterday definitely came close, perhaps even took the overall medal!

On Wednesday night after two days of resting and eating, to try and make myself feel a little less zombified, I jumped in the car with James and Neil Carnegie and headed for Costa del Loch Muick car park for a few hours shut eye in the tent before a 4:45am start.

I was meeting up with Guy again to make the most of the awesome weather and conditions we’ve been getting this week before it crapped out at the weekend. We took bikes on the off chance that the Land Rover track might be cyclable, and thankfully apart from some icy sections, we were able to ride all the way to the bothy with only one or two deep snow diving experiences. 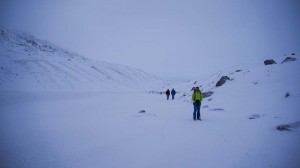 Guy, James and Neil making the most of the easy walking conditions

After that it was time to get our wade on! The path was buried in a frustrating amount of different snow conditions, one moment you’re wading through knee deep powder, then you’d get to some solid névé where you’d get all excited and lured into a false sense of security, 5 minutes later whilst strolling off at high speed… POW, the crust breaks and you’re up to you waist in a fluffy deep cold pit. Not so fun to say the least! It was bliss to eventually reach the loch. The crag had partially come into view through the looming mist and was looking about as wintery as it gets, and the loch was almost fully frozen over. This made for perfect walking conditions on the icy surface around the left hand side, which was a nice change from our booby trapped first half of the walk in. 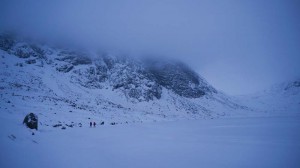 James and Neil continued along the loch in search of some ice filled adventures and Guy and I headed up hill to the base of the very loaded and scary looking easy gully.

As we geared up, the cloud never really lifted and only glimpses of our route could be caught between fumbling with harnesses and trying to stuff food in our mouths ready for a day of nerve induced starvation. Guy proceeded to consume a full wedge of pure brie which was quite impressive, and made a change from his bean and cheese pasties that usually came along on these outings. The food of winter climbers is never boring!

After our cultural and inventive snacks, we set off up the arduous and scarily snowy lower ground, soloing to the base of our route. 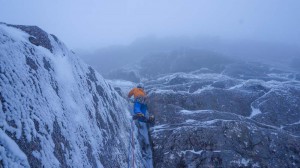 Over the past three seasons I have made the long approach into the Dubh Loch seven times with our intended route in mind. Three of those times I have climbed alternative routes, three times I have left without doing anything due to conditions, and one time I just walked in on a rest day to see what the conditions might be like for the following day. I have only ever seen the route in “full winter condition” once out of those seven visits and that one time the temps where too high and everything was melting fast! But finally we were there and so was the route. The winter was there, hanging from the crag in the form of sharp long curtains of ice and crisp straggly tufts of turf all covered in a flood of snow and hoarfrost. It was game on!

We were going to war, “Range War” to be precise. Info from friends told us that it was a turfy wet and dirty E4 in summer. They also said that it would lend itself very well towards being a very good and hard modern day mixed adventure. So obviously we put ourselves forward for the challenge. 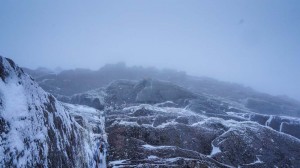 Guy pulling through the tricky roof on pitch one

We had spied an alternative, new, winter-only line to the left for the first pitch which led us to the same stance higher up and looked much more like the obvious winter challenge of steep turfy plumes and technical roof capped corners. Guy took this pitch and after some shouts of how good the moves were through the shielding mist and some funky maneuvers to breach the roof, he finally shouted “SAFE” and brought me up. I stopped on a ledge just before the corner to snap a pic as I hadn’t had a good view of it below and then proceeded to enjoy the moves just as much as Guy had. The pitch was the perfect warm up both mentally and physically for the next pitch and main event. 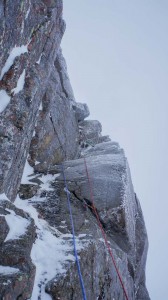 The roof capped corner from another angle

By this time the cloud and mist had begun to clear away and the whole coire came into view. I could see the sun hitting the route that James and Neil were on, then as I focused on the game at hand, my attention turned to the next pitch. 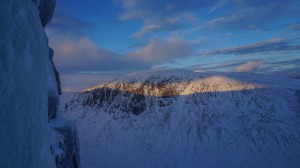 It was a steep, hanging wall leading to a niche capped by a roof. The wall was smeared with hanging icicles and above the niche there was an ice curtain enticingly hanging over a higher a large overlap. I was nervous! Three years I’ve been coming to try this route and now it was time to step up and give it a shot. But it looked hard, and more to the point, the pitch looked long and sustained. Thoughts of still being fatigued from Mondays adventure plagued my head and whether or not I’d be able to hold onto the technical looking wall long enough to get adequate protection. I wasn’t really in the mood to repeat Mondays bold and scary lead any time soon. 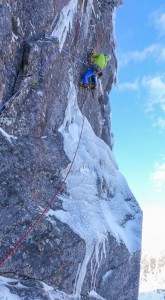 Me getting my head in gear

But I was there now, stood below one of the best looking pitches of climbing I had ever seen, with a psyched partner and some amazing weather, it would have been rude not to at least have given it the respect of trying, even if failure was the consequence.

Gaining the pumpy and trying to get recovered

I surmounted the first pedestal and took a deep breath. “No down-climbing this time” I told myself, to try and preserve energy on this monster of a pitch. I started up with every move nudging my thoughts into the correct headspace, and found myself enjoying every second of the experience. I composed myself and tried not to let the technical torques and moves get one arm more pumped than the other. I continued up and then the pump started to sneak in. I was shaking and looking for the next move, shaking and looking, this process went on until I decided to charge for the niche that looked like it would be home to a nice comfortable rest. Unfortunately this wasn’t to be, the routes steepness was deceptive and although the niche wasn’t as steep as the lower wall, it was still well overhanging. I fought to get some gear in and try and de-pump my now burning forearms, deep egyptians and contortions were tried to relive my arms and finally once I had scoped what looked like the way to sanctuary, I powered on through the steep capping roof of the niche to gain a wild and astonishingly exposed position on the overhanging arête. Hundreds of meters of cliff dropping away below me with nothing but air between me and the coire floor. This is a memory that will last a lifetime!

The evening view from the belay

After that it was out onto and over the ice-capped overlap and into a position below another steep ice smothered bulge. At this point the head games had returned, I really didn’t want to blow it at this point but the next section of climbing was not too hard but very off balance and with only a turf hook half hammered into the capping ice, as there wasn’t enough for screws (which we did remember this time), I had thoughts of fluffing it and taking the ride into the exposure in the back of my head as I committed. Eventually I gained easier ground and the comfort of the ice cave where I belayed and took in the exposure in a more comfortable state. 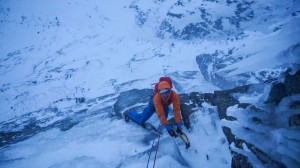 Guy seconding with the exposure booming below him

The usual cries of enjoyment and beaming smiles were found as Guy seconded the pitch, and as I was belaying him up, I recounted almost every move in my head and was unbelievably psyched to climb what was definitely one of the best and varied pitches I have ever been on!

By the time Guy had reached the cave belay the weather had rolled in and the spindrift and wind were howling down the crag, he grabbed a handful of gear and raced on upwards over the flowing blue ice and eventually to the top of the crag and I finished off the route with a screaming ice-cream headache and a mouth full of wind-propelled powder snow. Some might say this is the best way to finish a big winter day in Scotland, in my opinion, they’re wrong! 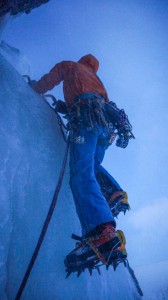 Guy moving away into a world of spindrift and wind

Once at the top we sorted the ropes and congratulated ourselves on doing the route that we had both been pining over for the last three years, and what a route it was!

We trotted back to the base of the coire and down to our bags via a pretty big detour due to the copious amounts of scary snow and loaded slopes, then it was off across the loch and back to the snowy path. We were hoping our tracks from the approach and James and Neil’s tracks out would still be nice and firm and showing for our swift exit, but the wind had drifted tones of new snow across and it was back to the booby-trapped trail breaking all the way back to the bikes.

It was a long and tiring day by the time we got back to the car, but by gumble it was well and truly worth it!