On Friday afternoon, Ally, Douige and I piled all our kit into the back of Dougies van and set our course for North Wales.

Ally had been invited to be the after dinner entertainment for the 3nd (almost annual) dry tooling meet at the White Goods. As he was going down to do his slideshow anyway, and Dougie had agreed to go down and give him a lift, I thought I might as well make up the numbers and head down with them. I had never been to the White Goods before, and I was keen to see if it was worth the 6 hour drive. 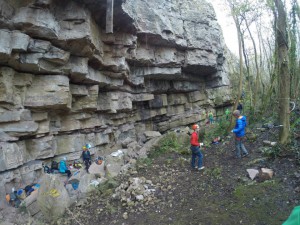 The Goods getting sessioned

I knew that lots of people raved about the place and that some handy chaps had ventured across to sample the goods for themselves, Including Tim Emmett and Will Gadd. So naturally I was uber psyched to get stuck in.

We got there late on Friday night, and after a good sleep in the back of the van, it was all go on Saturday morning. It was cool to see lots of people had made the effort to head across from all over the country to attend the meet, and it wasn’t long before everyone was having a good time and getting pumped on their own little adventures on the steep and techy routes.

I had a really good days climbing and chilling out on the Saturday, and managed to climb a load of quality routes, including the 2nd ascent (flash) of Neomania M10+ and the first flash ascent of Careful Torque M11. All the routes I did were good fun and it was a shame the night rolled in before I could tick a few more. 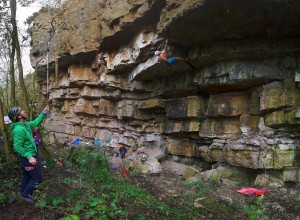 But after the pub grub and the prize giving for the friendly comp that had been going on throughout the day, which I was psyched to win, it was up to Ally to talk us through the last five or so years of his time and antics in Chamonix. It was an awesome talk and it was cool to see a good friend be so enthusiastic explaining all the rad stuff he’s been up to in the mountains and the close calls that he thankfully managed to pull through on. Keep it up man! 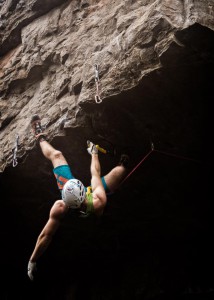 The next morning Ally and Dougie headed back North via some rock climbing cragging action and I jumped in the car with Masa Sakano who had also driven down from Scotland, and had offered to give me a lift home if I wanted to stay for the rest of the weekend meet.

So it was back to the crag, but this time Ramon Marin and I headed to the Power Pact cave area to look at the route “Stump Man” M11 that Tim Emmett did the first ascent of back in 2012. It was a bit unnerving, as Ramon explained that there had been a lot of rock fall on the adjacent routes in the cave and that we should definitely stay away from them. Gulp! But after Ramon had had a play on “Stump Man” and had assured me that it was safe to climb, I geared up for my go. 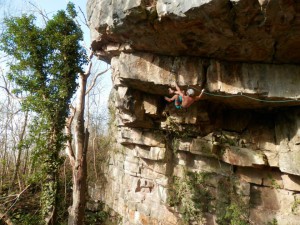 Me getting to grips with “Stump Man”. Photo Credit- Nicole Almond

I knew I didn’t have many route attempts worth of energy in me after the previous day of going at everything I laid my eyes/tools on, so I was a bit nervous to see how I got on. But thankfully after a fight across the lip and some inventive and super thin pick placements, I managed to clip the chains on my first go and lowered off with a big smile. I was really psyched to get this route climbed, as it was the photos I saw in 2012 of Tim Emmett climbing this route that made me want to come to the White Goods in the first place. 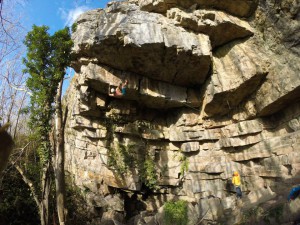 After that I finished off the route I had been shut down on the previous day due to the night rolling in, and managed to squeeze one last tick in before Masa and I headed off in search of food and warmth at a friend of Masa’s, David Taylor’s house. (Thanks again Dave)

All in all it was an awesome weekend and a big thanks to all the sponsors and the people that made it happen, and more importantly, a big thanks to Ramon, who went out his way to give me loads of beta for the routes and helped me have such a successful weekend.

On the way back North on Monday, Masa and I stopped off at the Works tooling venue in the Lakes and met up with a big bunch of friends from Scotland and even Mr Mercier who was over from France to sample the British routes. It was another fun and psyche filled day, but I was feeling the effects of the weekend, so I just took it easy and heckled the rest.

A good three days, and now it’s back to work and training before winter actually gets its ass to Scotland.

Tumble in the Jungle- M9, Flash