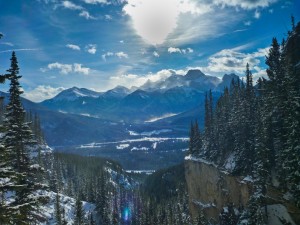 Not exactly the view you get from Newtyle

So since Nick and I had an amazing day on “Victoria’s Secret Deviation” there has been some pretty crazy weather blowing through Canada. There’s been loads of snow coming down and getting blown about in the strong winds, and the temps have been falling below -25’C. So trying to find safe stuff to do were we wouldn’t get avalanched and sheltered enough, so we didn’t feel the brunt of the -32’C wind-chill, has been pretty tricky. 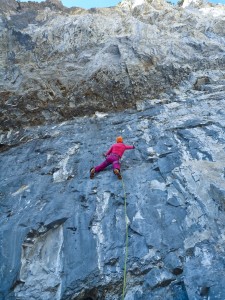 Jen on the super techy M6+

But on Wednesday and Thursday last week, Nick, Jen Olson, Ian Welsted and I managed to get out and do some really fun tooling/training, and on Thursday Matthias Scherer and Tanja Schmitt (our friends from “Rocket Man”) also showed up to sample the Canadian tech fest. There is a place in the area that has some really funky routes. All but one of the routes are on natural placements, which provides some steep, techy and super enjoyable climbing.

The highlight for me was doing Mr Slawinski’s route that starts up an interesting M7, and then blasts through a steep roof on big moves to gain a steep and pumpy hanging dihedral. The route must be about 35m long and takes in some pretty thin and sustained climbing in the upper half. Sending this, made me the second person to climb the route, after Raph obviously, so it was pretty cool to get it done, even though I’m starting to feel pretty tired now that we’re approaching the end of the trip. Not so much of a highlight, but still pretty funny, was when I got lowered from the route after the send and found that the rope was about 15m too short. But we eventually sorted it and all was ok! 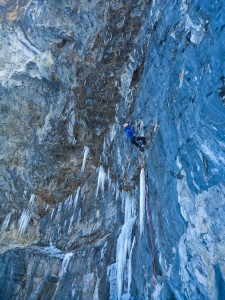 Nick on the lower M7 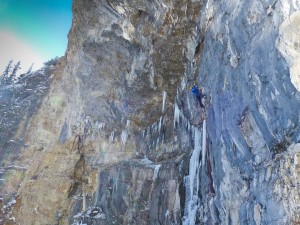 Me approaching the roof on Raph’s route. Photo. Nick bullock 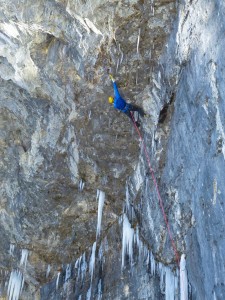 Me starting the harder upper half through the steepness. Photo. Nick Bullock

Raph gave the route M10 (maybe in his famous sandbag style perhaps), but in all the places I’ve climbed in Europe, it would comfortably get the grade of M11. It was similar to the two hard pitches on Illuminati in the Italian Dolomites, as they are also entirely on natural placements.  But all in all it was an awesome route (regardless of the grade), and along with many of the other routes, it was a good way to spend two days sheltering from the wind and still getting some good climbing done.

So after another awesome evening at the Croston household on Thursday, where Jo and Colin were outstanding hosts yet again, we had a chilled day on Friday and organised some plans for one final Canadian adventure on Saturday. 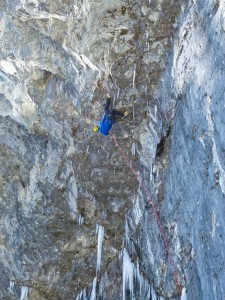 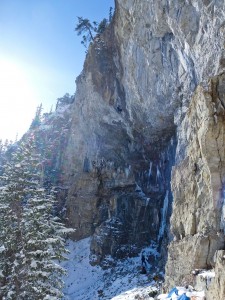 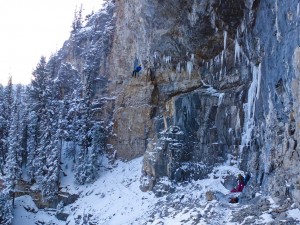 With not knowing what the conditions would be like in the higher venues/mountains, after all the snow and especially after the wind depositing said snow in some sketchy places. We decided to head back into the Headwall with no real plans, except to climb something fun. We took a full trad rack and fairly comprehensive Ice rack and agreed to get on whatever looked inspiring/ in condition. 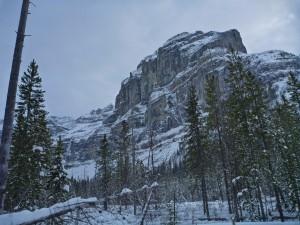 The Headwall in all its glory.

Our first two possible plans were out of the question, due to a fairly noticeable loss of ice since we had been in to do “Man Yoga” earlier in the trip. So we kept on trudging on below the Headwall in search of some inspiration.

Eventually that inspiration came into view from behind a jutting mass of rock. At first it was just a small piece of ice peeping at us from above the rock, but once we plodded further through the deep snow, the main event in all its glory came into sight! “Boom! Come and climb me” It seemed to shout, so that is exactly what we did.

The route is called “Nemesis” and is a well know classic WI6 in Canada. It is described in the guide book as: 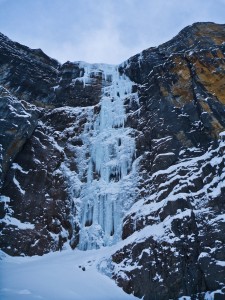 Nemesis in all its glory!

“Today Nemesis remains a challenge to even the best of climbers and is one of the few early climbs that has not been downgraded or lost its reputation. The route forms every year but with varying quality and with several possible lines. It is usually climbed in four pitches, but has been done in three.” 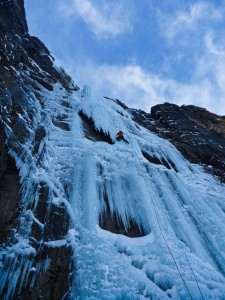 Nick leading up the first pitch of Nemesis. 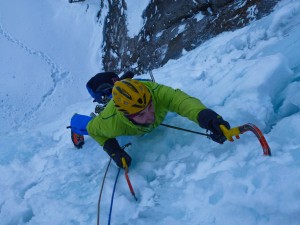 Me reaching the belay on the first pitch of Nemesis. Photo. Nick Bullock

It was perfect; a nice ice route to finish off what has been an outstanding and memorable trip to Canada. We did the route in three awesome pitches, all of which were of 4 star quality, and even managed to get back to the car without the use of our head-torches, which was a first for the trip. 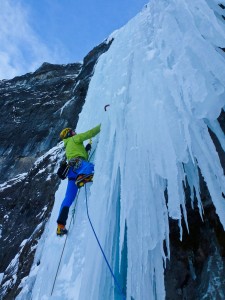 Me heading away from the belay on the second pitch.
Photo. Nick Bullock 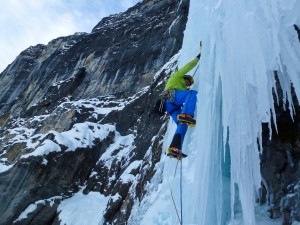 Me moving up the second pitch. Photo. Nick Bullock

To sum it up, having a fairly cruisey last day on Nemesis was the icing on the cake to an amazing three weeks climbing with Nick. Like I said in my earlier posts, this was my first tip to Canada and the memories and friends I have gained while out here will stay with me for a very very long time! I’m already making plans to come back and climb in these special mountains again, and I’ve not even left yet, that’s how good it is. 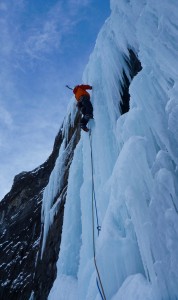 Nick on the last steep section of the climb.

Thanks for reading my blogs about this trip and hopefully some of you may have been inspired to get out and have some cool adventures in the mountains yourself. Keep an eye out on here though, as I’m heading back to Scotland tomorrow, and I am currently on a psyche overload to get loads of cool mixed stuff done in the mountains back home. So let’s just hope it’s a good season!

One thought on “Nemesis”