Ever since reading Ian Parnell’s blog a couple of years ago, when he wrote about Raphael Slawinski’s ascent of his new route “Victoria’s Secret Deviation”, I have had a seed planted in the back of my mind. The route really inspired me to come out and climb in Canada. At that time I didn’t know anything about the climbing out here or on Stanley Headwall, but I knew I had to climb this route one day! 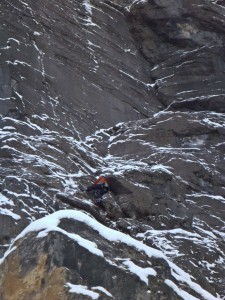 Nick leading up pitch one 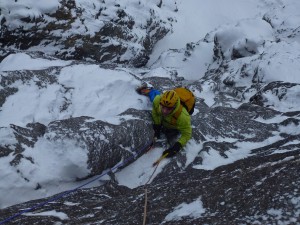 Me seconding pitch one. Some good Scottish style fun!

My interest in the route got re-sparked last year when on the back page of Climb Magazine, there was a picture of Raph taking a rather large whipper on the first ascent attempt. This sort of thing really gets me psyched, seeing someone giving it there all and taking the consequences as and when they arrive, whether it be topping out on the route, or taking the whipper, either way it’s all go! 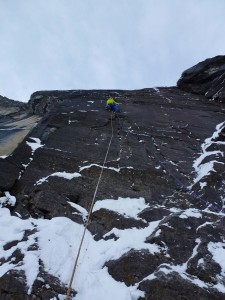 Me leading up the techy second pitch.

So today I finally got my chance to get on the route, and what a route it was! It had a full on Scottish feel to it (minus the rimed up rock), there was some super techy face climbing with cheeky cracks and torques that provided upwards progress bit by bit. Also, the route was totally protected by trad gear (my favourite)!

Nick lead up the first pitch with ease, then I headed on up the main event first, after winning the Rock, Paper, Scissors at the bottom of the route. After some time cleaning out the frozen and snowy cracks, I finally made it to the last few heart in mouth moves and eventually topped out with a huge smile on my face. I was super psyched to on-sight this route, as it meant a fair bit to me (and I think it was the third ascent). It was literally the photo of this route that made me want to come out to Canada three years ago, and now I’m finally here! 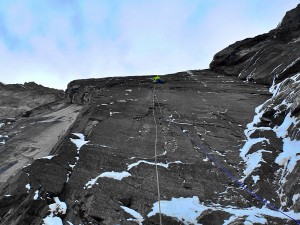 Me higher on the 2nd pitch. Loving every second of it!

After this, I rapped the route and stripped it of all my hard won gear placements in preparation for Nicks’ attempt. We didn’t want him having any cheeky advantages!

Nick went on to flash the route in good style and made my good day even better! It’s always nice when both you and your climbing partner get the send on a route after you both have been standing, freezing you asses off, while the other put the time in on the climb! 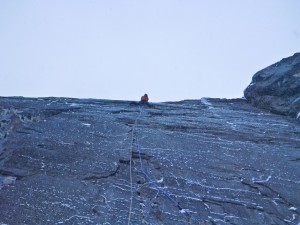 Nick sending the flash on the main event!

All in all it was an awesome day, and has topped this Canada trip off nicely, and there is still a week left before we go home!