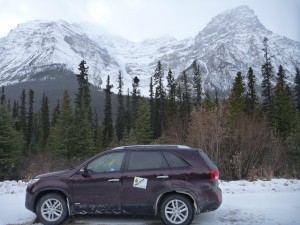 Our hostel for the night

On Wednesday, Nick and I headed off in the direction of the Icefields Parkway. We were planning an afternoon scouting mission to check access to our intended route and to figure out the best place to cross the river while it was still light. After checking the river and setting up the car for sleep mode, we tucking into some food and settled down for a surprisingly good night’s sleep. 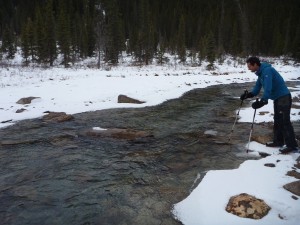 Nick checking the depth of the river… hoping it wont go over our bin liners that we brought to wade it!

We got up at 3:30 am and after eating some more grub, we headed into the forest and over the suspicious looking ice bridge over the river. After that it was up the drainage shoot and into the wide snow and moraine bowl that lead to the base of the route.

The higher we got, the deeper the snow, and after trudging through waist deep powder for almost an hour, we were finally getting close to the route. I looked back to see how Nick was getting on and much to my surprise; I saw to head torches below us gaining height pretty quickly in my freshly broken trail. This was annoying! I then went into worried climber about to lose his route mode (adopted more frequently in France). I sped up the trail breaking and all the time I was wading through the porridge like snow, the head lights kept gaining on us. 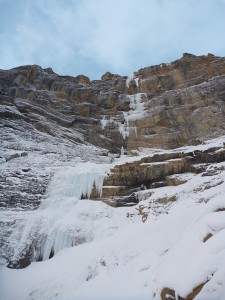 Rocket Man from below

Once at the bottom of the route, we started to gear up swiftly, and there was buzz of anxiousness in the air. But eventually the couple walked over the last small hill and up to our gearing up spot. Nick did the welcoming thing and said “what are you planning to climb!”, which really meant don’t even think about getting on the route we are stood below! But the couple were super nice and said that they had seen us walking up and decided not to climb the route, but they wanted to see it from below and come and have a chat with us anyway. Ahhhhh and relex! We all had a good chat and after they had shared their tea so that they didn’t need to carry it back down, they headed off back to the car and we headed up the route.

Our route was called “Rocket Man” and it is another of Rapheal Slawinski route, which meant it was going to feel hard and interesting! It is a 350m, VI M7+ WI5+ that is described in the “Mixed Climbs in the Canadian Rockies” book as:

(“A spectacular route, in a high energy environment!” Rocket Man is the series of smears and drips weeping down the steep cliff to the right of Snowbird Glacier on Mount Patterson. Nine pitches of climbing make this the longest waterfall-style mixed route in the Rockies. Many hazards lurk below and above this route: active glaciers that spew debris threatening the approach.} 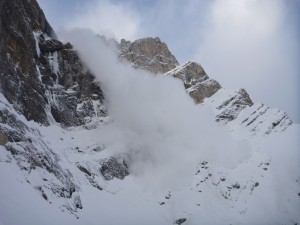 The big slide we saw ripping down to our right! Uh Ohhh…

The route was stocked full of interesting climbing both hard and technical. “High energy environment” was damn right! The route was pretty much, 9 super sustained pitches of hard ice and mixed climbing which kept on coming, all the way to the last move. It was also definitely stocked full of hazards, as we were on pitch two, I was belaying Nick and I heard a massive boom. I looked to my right to see a huge avalanche ripping down the valley that we had just walked up….yikes, close one!

Nick and I split the pitches working to our strengths. I took the steep mixed pitches and Nick took the techy thin and steep ice pitches. The climbing was world class, despite the slightly scrappy rock on some of the mixed pitches. But this just added to the adventure factor. 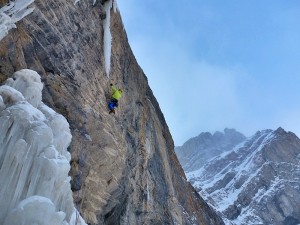 Me on pitch 7, hoping to not rip any bolts!

It was interesting to climb the steep and techy 7th pitch on fractures and loose edges for your picks, knowing that the last person to fall off the pitch took the second bolt (ripped it out) with them and nearly decked out. Always good for the head to keep fighting and spur you on to not fall off when you think you might get hurt! So the third bolt is now pretty high up the pitch, (especially when I didn’t find the first bolt) mmmmm…. spicy!

Altogether the route was super enjoyable, and despite climbing the last two pitches in the dark and doing some suspect diagonal rappels due to hidden rapp bolts under the ice, Nick and I had a brilliant time on yet another outstanding Canadian route. 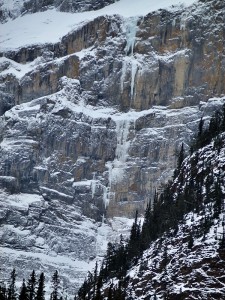 With just over another week to go, let’s hope we get a couple more in before we fly home.

Pitch.1 – A straight forward WI3 pitch with some steepish ice and a bit of snow plodding! (My lead)

pitch.2 – A technical and thin ice smear/mixed corner with less than adequate ice, apart from the top pillar. (Nicks’ lead) 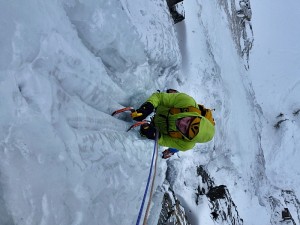 Good ice at the top of our pitch two. 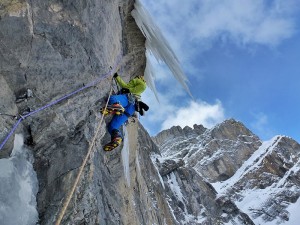 Me starting up the M7 pitch 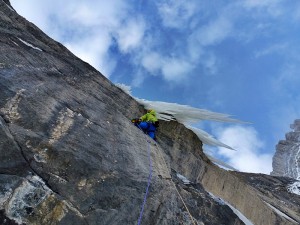 Me reaching the drip 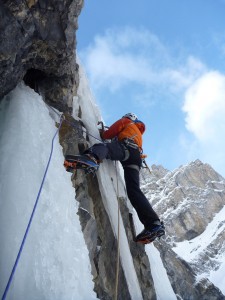 Pitch.5- We did the alternate ice pitch out right on deceptively thin smears. (Nicks’ lead) 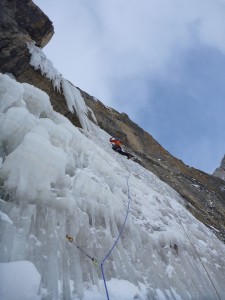 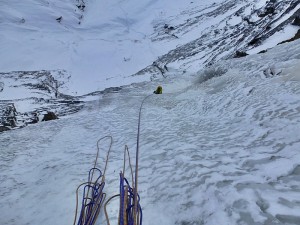 Pitch.6 – Another alternative pitch due to good ice on the route. (Nicks’ lead) 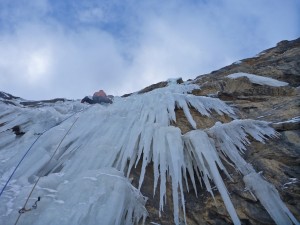 Nick heading up beside some cool features on pitch 6.

Pitch.7- A steep and techy mixed pitch with some outstanding climbing. (My lead)

Pitch.8 – A steep and featured WI5 ice pillar, this was totally virgin ice, so it was a little tricky! (Nicks’ lead) 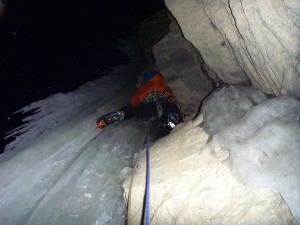 Nick on the second last pitch, just as night set it.

Pitch.9- A steep mixed pitch with poor gear to reach an easy and welcoming WI4 finish and the icing on the cake to a good day. (My lead) 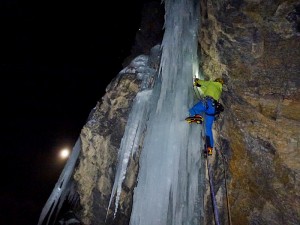 Me on the last hard section of the route. An interesting finish!