Since our day on the Maul, I have met up with Raphael Slawinksi (local guru) for some dry tooling at a local venue (Saturday), got up stupidly early only to find the snow in K-country was throwing it down all night and morning, which meant for a bit of a wasted day (Sunday) and yesterday I lost my Stanley Headwall virginity, and Ohhhh baby it was good!

After not getting anything done on Sunday due to the snow/our poor route choice, Nick and I decided to head into Stanley Headwall yesterday after getting some conditions beta from the man him self… Jon Walsh (another local guru, and the first ascentionist of our intended route). 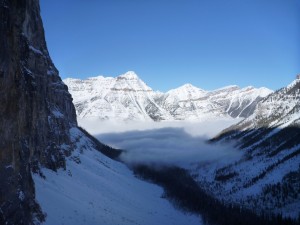 The awesome inversion rolling in.

We ended up climbing the impeccable and super varied 250m M8 “Man Yoga”. This has to be one of the funnest mixed routes I have done. The climbing was super technical, varied, safe and an awesome adventure through chimneys, over roofs, up slabs and finishing on some steep ice. What more could you ask for! 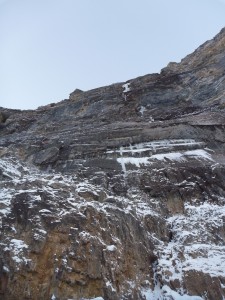 The route of Man Yoga twists its way up the big face to reach this obvious ice.

As we were just about to leave our bags and set off up the access pitch, we noticed someone heading up out of the trees bellow us. We knew Jon had been on the headwall the previous day and not wanting to rush off and not say hi, we hung around for a bit and had a chat. Secretly wanting any extra beta on the route that might’ve been on offer. Unfortunately all Jon told us that we didn’t already know, was that the top steep ice pitch was missing a large section of ice through a roof. He said it would probably be pretty spicy but potentially doable. That was good enough for me, and with that, we headed off in the direction of some world class climbing. 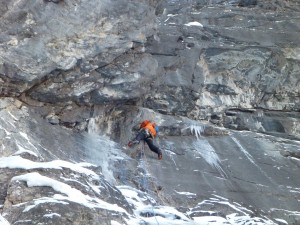 Nick starting up pitch one of Man Yoga.

The whole route was totally amazing and the last pitch, usually a steady WI5 pitch, I ended up leading a spicy M7/WI5, which was a cool finish to an awesome and fun day.

I’ll let theour photos and the video of the first ascentionists do all the talking. They’re better than my words will ever be. We will defo be heading back into the Headwall for more action on this trip though, so in the words of Mr Bullock when he’s running it out above gear and I’m usually trying to take pictures, “Keep an eye!”.

Pitch Two: My Lead – A super techy slab pitch that covered some interesting ground and features! 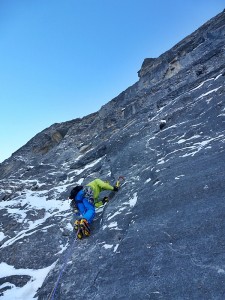 Me starting up the techy slab pitch. 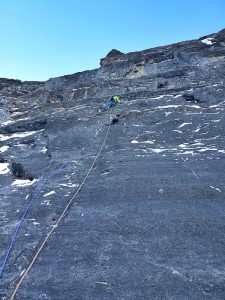 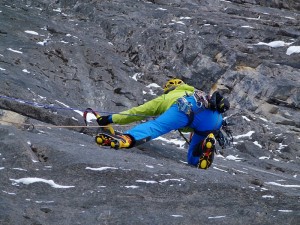 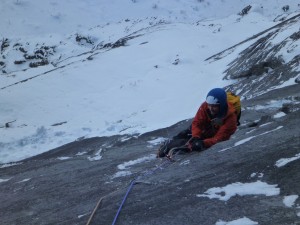 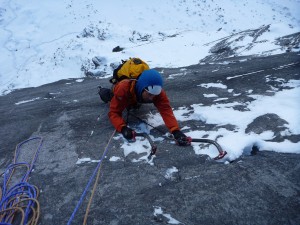 Nick approaching the belay on the 2nd pitch

Pitch Three: My Lead – A fairly easy pitch with a bit of a tricky start (more of a link pitch) 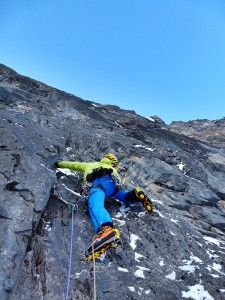 My leaving the belay on pitch 3 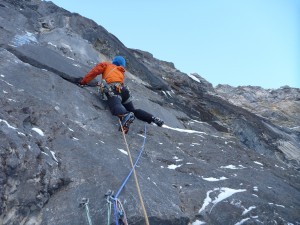 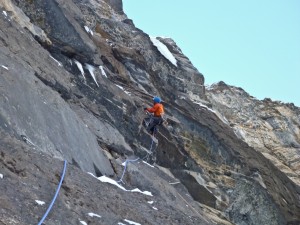 Nick pulling through the roof on the 4th pitch 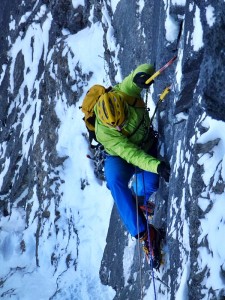 Me busting out some man yoga moves on the 4th pitch 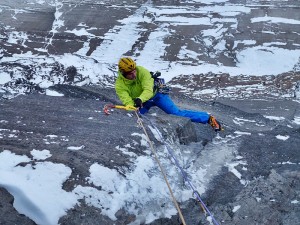 My pulling over the roof on the 4th pitch 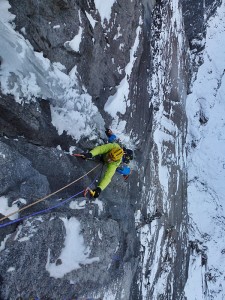 spreading the weight to stop my axes ripping, on the approach to the 4th belay.

Pitch Five: My Lead – Usually a straightforward ice pitch (apparently). But we had a thin techy section into a mixed overhang into a steep awesome ice wall. 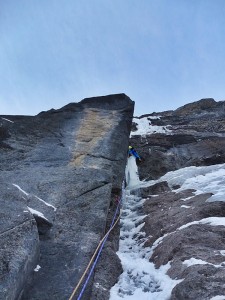 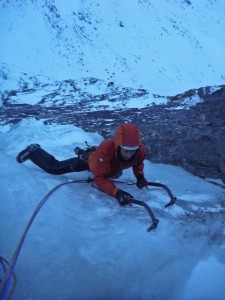 Nick doing the last few moves of an amazing route!

This was a brilliant route, and I urge anyone who comes out here to climb, to get on it and have as much fun as we did yesterday. To get two big awesome route ticked in our first week was excellent. Now for a few more! 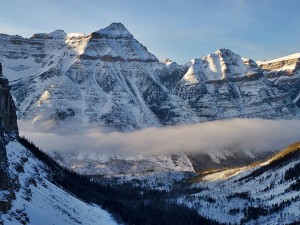 The view from Man Yoga in the setting sun

One thought on “Man Yoga”