Comps… I used to hate them. There is the pressure of people watching your every move, pressure of not performing to your best abilities, pressure of not being fit/strong enough to hold your own against the other competitors, and a whole world of pressure in the isolation room if you make it to the finals.

I usually give all types of climbing competitions a wide birth, but last weekend I decided to get involved in what turned out to be an awesome comp and an awesome day!

I was asked to go along to the Ice Festival comp at the Ice Factor in Kinlochleven a while back, to do some rep work for Scarpa and Grivel. I was pretty psyched to be going along, as Kev Sheilds had organised this charity fund raising comp CAC, and I knew he would put on some good routes and it would attract a load of psyched folk to chat to and see everyone getting ready for the fast approaching winter.

As the weeks past by, Steve Johnston and Dougie had been cranking at my training wall, getting ready and topping up the fitness for the Ice fest. The training sessions were so much fun and with the semi competitive nature of the three of us, it didn’t take much convincing from them that I should enter. Seen as though I was going along anyway.

So last Saturday, Mhairi, Dougie and I headed off to Kinlochleven ready for a day of tricky routes, techy pulls, but most of all, fun times with a bunch of good friends. 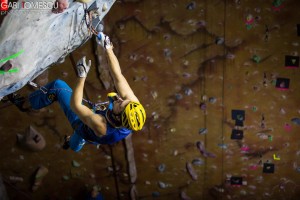 Nearly there. the chains are in sight. Photo credit – www.extremetattoo.co.uk

After setting up the Scarpa and Grivel stand, which attracted a load of interest, especially with the new Scarpa Rebel range being on show, I headed off to the registration desk and got signed up. It was cool to meet up with so many psyched climbers from all over the UK. Mr Turner had made the trek North along with many other keen individuals, Steve was pumped up and ready for some mixed action and there were many other top UK tool wielding climbers arriving every minute. It was going to be a tough day if I wanted to do well.

But after a slight slip up on my very first route of the qualifiers (due to competition butterflies), I managed to flash everything else and found myself obtaining a place along with five others in the Male Seiner category finals.

This is what I hated about competitions, some people love it, I am not one of those people! I was now sat in the bouldering room of the Ice Factor in isolation waiting my turn to go out and try the final route, listening to the three climbers before me obviously topping out on the route due to the sound of the crowds cheering, I was sooo nervous. I have done some pretty scary stuff in my climbing carrier, but for some reason the thought of going out and trying the final route in front of the big crowd terrified me, knowing I had to top out and do it faster than the three previous climbers and the two that were due to climb after me. I would have given anything to have been in the mountains at that point; even if it meant running it out far above some dodgy gear looking for my next axe placement on some sketchy new route, at least then I would have been in my comfort zone! 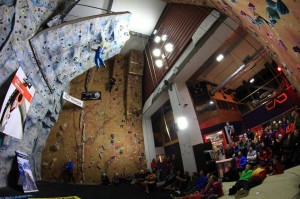 Me nearing the top of the mens final. Photo Credit – Dom Scott

But eventually my name was called and I made my way to the bottom of the route. Once I left the ground and I got stuck into the climbing, everything changed, I was psyched, focused and wanted to win. I moved through the steady starting moves and quickly gained the steep meaty section of the route. I was then in my comfort zone again, after swinging between good hooks and funky moves, I found myself clipping the chains and what I didn’t know at the time, I had climbed my way into first place to take the win.

It was an awesome comp, and even though I was super nervous, I might have changed my view on competing, it was kinda fun to climb under a new sort of pressure, a safe sort of pressure.

After the comp and the after party, we headed home on Sunday morning, and I packed all my stuff into two big duffle bags ready for my next adventure.

A nice day for a walk in K- Country

On Monday morning I flew out to Canada to meet up with Nick Bullock, who had been out at the Banff film and book festival, psyched and ready for some Canadian mixed and Ice routes of all size and style. So if you are interested to see how we get on watch this space and I’ll keep you up-to-date.