While sitting on my couch feeling a little down, full of a flue/cold, without a functional car and looking at amazing weather outside, I started to think about all the cool things I’ve done in Scotland over the past couple of winter seasons. And when I started thinking of all these cool things I’ve done, places I’ve visited and people I’ve met, I thought the same thing I usually do during all the different climbing seasons throughout the year, “Scotland truly is one of the coolest places I’ve been to around world.”

While recapping on some thoughts, I started watching some videos of other people that have visited Scotland, (whether it be from within the UK or further afield) and have had the same feelings as me. So I have put some links below of some cool videos featuring some cool people and showing some very cool places.

The first is a video called “Rough Feels Good”, and it is about two Austrian friends of mine who came over to Scotland, hired a Big Tree Campervan, and hit the road, exploring all that this awesome country has to offer! And as you can see, they had a pretty cool trip.

The next is about a weekend on one of Scotland best and most impressive mountains, Ben Nevis. When a bunch of keen winter climbers who had been competing in the STS (Scottish Tooling Series) from all over the UK teamed up with some invited hosts for a couple of days of fun and adventurous winter climbing.

And finally, the last two short films show how Scotland can inspire and attract some of the best climbers in the world to return year after year to sample what this awesome landscape has to offer, in both beauty and adventure! Ines Papert, a top class female climber, shows how it’s done from the view of a newcomer to the Scottish mountains. 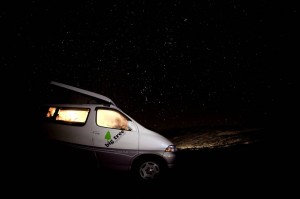 A Big Tree Camper In all its glory! (Photo credit - Hans Hornberger)

All of these films were brought to life after travelling around Scotland with the help of Big Tree Campervans. I think it’s awesome how so many people can share so many cool memories from such a cool country and sport. You’ve just got to keep exploring and looking for the adventure (corny, but true!).