Two weeks ago, Guy, my Dad and I headed up into the Dubh Loch in search of some super hard and steep winter climbing, well me and Guy did, my dad was keen on photo duty. Our intended objective wasn’t looking too wintery, so we opted to have a look at another line in the same area.

The route we tried was a battle of technical climbing, but also home to some very steep ground. We fought our way higher, and after two and a half long hard pitches, which involved some of the hardest moves I have climbed onsight in winter, we couldn’t seem to find a way past the last hard section. Dangerously bold climbing loomed above us and whichever way we tried, we couldn’t slay the beast!

But as darkness rolled in, we succumbed, and rapped back down to our bags. And even though we hadn’t won the battle, we still had had an awesome day full of good and very hard climbing. Which in the end, is all we were aiming for anyway. Getting to the top would just have been the icing on the cake.

That day reminded me why I like climbing so much. Even though we had walked for three hours to get there, and walked three hours back to the car, and didn’t manage to get to the top, you can still have an awesome time just by trying your hardest. But we still did some very enjoyable climbing, in a very cool location on a very sunny day….. What more could you ask for?

But on Thursday night I teamed up with Guy again, and this time Pete Benson joined us in our quest for adventure. 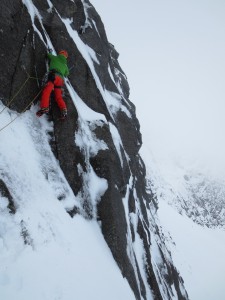 Pete on the first pitch of "Fancy Free"

As I don’t have a car at the moment, Guy and Pete picked me up off the train in Aberdeen and we headed for the Glen Muick car park. Unfortunately we only got halfway down the Glen Muick road, as the 6ft snow drifts had stopped the snow plough from going any further. So we grabbed the tent and sleeping bags and walked the last 5km along the deep snowy road to the visitor centre car park and camped in the trees, ready for an early start the following morning. 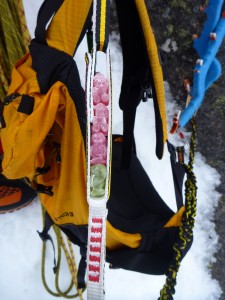 The new Girvel Jelly Baby Cartridge, for all your belay sweety needs!

We got up bright and early, and marched through the deep snow drifts up to the col and into the Lochnagar Coire just as the sun was rising. As we approached the mountain rescue box at the foot of the coire, we noticed that the snow pack was very very unstable. We all proceeded to dig pits and check the layers and snow pack etc, and after 5 mins of umming and ahing, we all came to the same conclusion….. it was bloody treacherous and far too dangerous to keep going! So we turned around and headed for a closer and more safely accessed part of the coire. 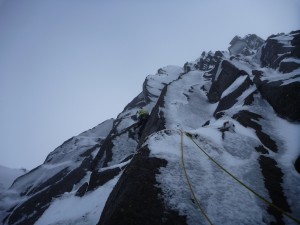 We ended up doing a very enjoyable new route in the area of “Mantichore” VII/7. The first pitch started up Mantichore, which Pete lead. It then traversed left to gain another short steep grove, which turned out to be very technical but thankfully fairly safe (crux), which Guy dispatched. And finely up the leftmost of the three obvious big grooves to finish on the easy ground on the crest, which I took the reins for. 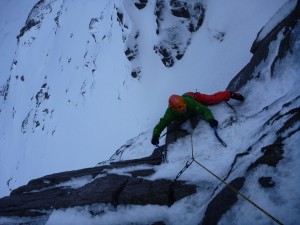 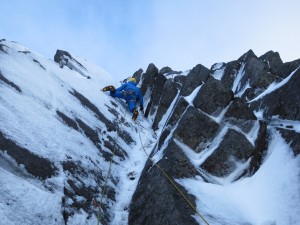 Me Leading the last pitch

It was a good route and helped us salvage the day with some awesome climbing and we didn’t need to go near too dangerous a slope to get to it.

We called it “Fancy Free”, in conjunction with “Footloose” which was another route Guy and Pete had put up in the same area a few winters ago, and gave it VII/9.

As we walked out, the sun was beaming down on us, and we ambled back to the car park to find the road had been cleared. Thankfully Pete managed to grab a lift back to the car, which he brought back to get me and Guy from the car park, saving the 5km walk back. Luxury! 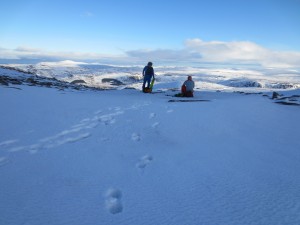 Chillaxing at the col before the walk out.