On Sunday, Guy and I headed off in the direction of Beinn Bhan hoping to climb something big, steep and hard on the Giants Wall. But unfortunately when we arrived at the bottom of the face in the morning light, it was BLACK! 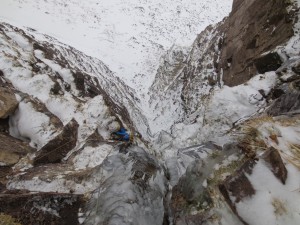 Me seconding the 2nd pitch of Genesis

Unfazed, we quickly darted around trying to find something in good condition to climb, and that is exactly what we did.

We ended up climbing the classic VII/7 Genesis which follows the huge corner fault line for three fun and exposed pitches. Even though it was not exactly what we had in mind for our day, it was a fun route and I was glad to finally make it into this area for a scope at some of the other lines.

Unfortunately on my way home to Fife (1 mile from home) the turbo blew out on my car, leaving me vehicle-less for the time being. Which is typical…… just as the conditions are getting good, I have no transport.

Thankfully Adam was keen to get out this week as well, so on Tuesday night after limping my poorly car into the garage to get fixed, Adam and I drove west to the foot of The Cobbler for an early night’s kip and ready for an awesome day on Wednesday.

After looking at some pics on the Climb Now blog from Martin Holland’s antics on The Cobbler earlier in the week, I noticed that the buttresses were looking super white….. Like the whitest I had ever seen them. So that meant only one thing… let’s go roof climbing! 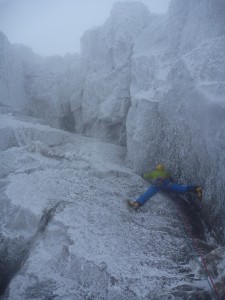 The tricky wall below the roof

It was the first time I had been up The Cobbler, but Adam had been a couple of times in the summer, so he was playing tour guide for the day. After some wandering around in the thick morning hill cloud, we eventually stumbled into the foot of the huge cave and looming above us was the sickeningly steep line of The Cathedral (X/11).

After texting Kev Shields the previous day asking him for the route description, I had a rough idea of what it would be like. But when I eventually saw the route, it looked much harder than I thought it would, and a hell of a lot whiter than I would have liked! But then again, if you’re going to climb a roof in winter, it might as well be as white as possible!

I started up the steep techy 15m wall below the roof, which was surprisingly tricky and required a little more thought and energy than I would have liked. But I bashed on up towards the impending barricade of horizontal steepness, and eventually found myself arranging gear beneath the blanket of ice and rime that coated the huge roof. 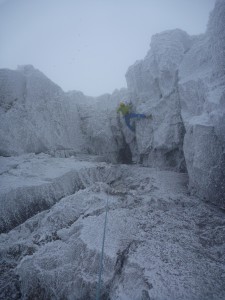 Getting pumped in the search for hooks!

Once I had gathered up some courage, I found myself performing some core destroying moves and getting pumped out of my head trying to clear away all the whiteness in the crack and on the wall trying to find hooks and a passage through the energy sapping roof. 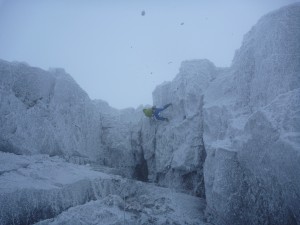 Nearly there... I can taste victory!

Once I was fully committed and cranking out looking for the next placement, scraping away with my right axe, trying to keep moving while clearing the unwanted rime away, the tiny chockstone I was pressing away on with my left tool pulled out and I took the big upside down swing into the wall below. The onsight was over…… I wasn’t too fussed though. Because even though the chockstone ripped, I was pretty damn pumped, and if these routes truly are this grade, which I think they are, anything above grade IX/9 should be very very hard to onsight. So it just shows that the grading scale is pretty good.

After having another go and not getting even as far as my previous high point due to cramping arms and soaking hands from all the clearing, I decided to have some lunch, pull the ropes, and have another proper go after I had had a bit of a rest and retrieved some much needed energy to try and bag this route good and proper.

Sitting at the bottom of the wall with the big roof peering down on me from above, I felt an enormous amount of pressure to climb the route that day. I didn’t want to have to return another day, and perhaps find it in less wintery conditions, which would leave a sour taste in my mouth after having such awesome conditions that day!

So at 2:15 I tied into the sharp end once again and flew up the lower wall to reach the start of the really hard climbing. This time my head was set on one thing and once thing only…. the top! I moved quickly between horrible wobbly hooks and torques and swung my feet out horizontally in front of me. I flustered around trying to find another hook where the last had ripped out, but all I could find was a tiny rounded sloping edge….. I matched this with both tools swaying left and right ( a good sign of little purchase, I.e. a shit placement!)  and lunged out as high as I could. My axe caught on something beneath the whiteness and as I weighted it, it pulled towards me, I moved straight away, flustered again I lunged with my other tool and pulled without thinking….the next few minutes are a blur of spindrift and forearm pump. But I kept going, and eventually flopped onto the top of the wall and into a world of easy ground. WOOOO FRICKEN HOOOOO! 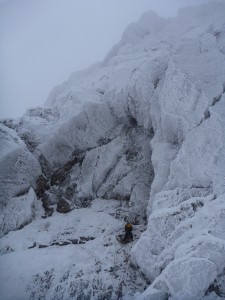 Packing up ready to head down after the ascent!

I was super psyched to get this route ticked, and once again Mr MacLeod gives an energy sapping masterpiece of fun and hard climbing……keep them coming Dave! 🙂 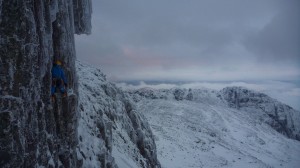 Pitch one on "Central Grooves"

After lots of fluid and food, Adam and I headed over to Glen Coe for some sleep, in prep for the good forecast on Thursday. We met up with Paul Prentice yesterday morning and had an amazing day, on an amazing route in the amazing weather. We did the 4 star route “Central Grooves”, and I think it is safe to say that we all enjoyed every second and every move one this stonking line! 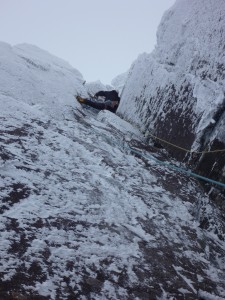 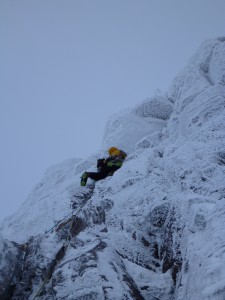 So it has been another eventful week in my little world of winter climbing. Let’s hope the conditions continue and the routes keep getting sent!