On Sunday night I headed off west to meet Adam in the Nevis Range car park. He had been climbing in Sneachda that day and had headed over ready for some Ben cranking on Monday. We trotted up to the hut and got settled in ready for the good conditions and good weather that was forecast the following day.

On Monday we walked up through the fresh snow towards No.3/4 area for a snoop around to see what was looking enticing. Unfortunately on the way past the Trident area, Adam started to feel pretty ill and was looking super pale!

All of the stuff we had in mind to climb was either more than one hard pitch or not in condition, and as Adam didn’t feel up to much we just decided to go on a potential new route recce and spied some cool lines to return back for another day. We then headed back to the hut, grabbed our gear and plodded back to the car.

That night I had arranged to meet up with Guy as we had plans to get something ticked on Tuesday. I gave him a call explaining the not so good conditions on the Ben, and after some toing and froing on where to head the next day, Adam and I made our way up to Aviemore to grab some food before continuing onwards to Inverness to pick up Guy, and then forth to Torridon. 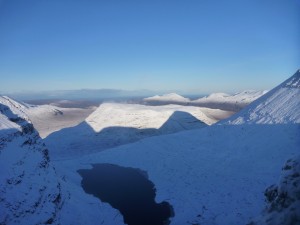 The view from the first belay

We parked up in the Beinn Eighe car park around 11:30, and Just after Guy had put up his tent, we had set our alarms for 4am, and had settled down to sleep, the heavens opened! This was not good. The forecast was for no precipitation, and as my stomach started to turn at the thought of the 2.5+ hour approach in torrential icy rain, I could deffo hear some bloody precipitation! I didn’t get much sleep, but when my alarm eventually went off, the rain had subsided and the stars were out in force once again. Phewwww! 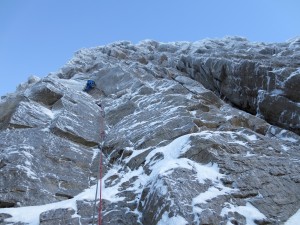 Me gaining hight on pitch one

The whole right side of my car and Guy’s tent was fully glazed in a layer of water ice, and the promising thing about that was that it was the same aspect as the crag we were heading for. Guy, Adam and I headed off about 5am from the car with high hopes of amazing conditions on the route and after a 3 hour slog up hill, breaking trail through deep snow most of the way, we arrived at the summit cairn and trotted to the lip of the buttress.

“Holly Shit” Guy squeaked in a very excited tone, “These are the best conditions I have ever seen on this mountain!”

Then we all seemed to adopt the form of excited school boys and scuttled off to get geared up and start the days climbing activities.

Unfortunately, Adam was still feeling pretty rotten, and opted to chill at the top, soak up the amazing views and act as camera man for the day, And like he said, “It’s better to feel ill on top of Beinn Eighe in amazing weather, than at home feeling sorry for yourself”.

Guy and I then rapped down the face, and after a little bother with ropes, which thankfully Adam sorted for us, we arrived at the bottom of what can only be described as “an all mighty stonker of a line”! 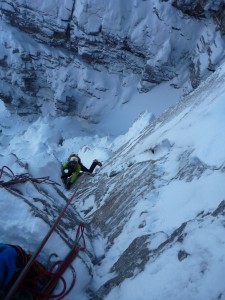 We were going for the first winter ascent of “Shoot The Breeze” on the West Central Wall, and as I looked up from the base of the route with nothing but overhangs and steep cracks looming above me, I knew this line was not going to be a Breeze! 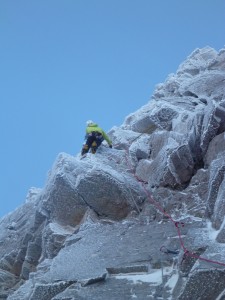 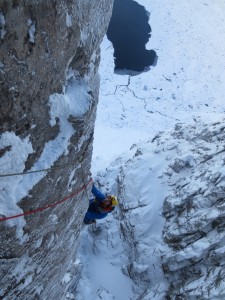 I started up the first pitch, and as I got stuck into the amazing climbing that this area has to offer I found myself enjoying every single move, all of which happened to be about tech 8. There was some steep climbing on the pitch, but after some working out of the last tricky section, I found myself pulling onto the belay ledge and……… “That’s me safe dude”.

Guy swiftly seconded up the pitch and after the usual swapping of gear and chatter about the awesomeness of what we had just come up, we looked up and everything got a little more serious. The big overhangs were now tantalisingly close, and as Guy took a swig of Lucozade and readied himself to climb, the silence of anticipation took over, as is usual when trying hard routes in winter.

After we were both ready, Guy headed off up the wall towards the steepness and balanced his way through the technical moves and steep pulls to reach the nice welcome of a small ledge, well, what he thought was a nice welcome! It turned out, that there was no good gear to be found, and the next section was super technical and super bold. So the ledge actually just turned into something he might smash into if an axe was to rip while moving upwards (not so welcoming then)! But after some heart in mouth moments for both of us as he battled his way to the obvious crack and potential gear on the arête, he managed to keep it together (as usual) and gain the outstandingly exposed position on the knife edged overhanging arête. He then moved out of sight and after a short while, I heard the (this time) very welcoming call of “SAFE”. Ahhhhhhhh……… 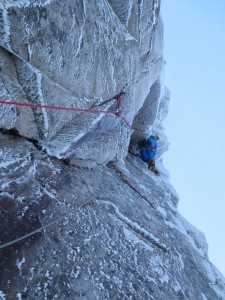 Me Gaining the Steepness on pitch three

As the day was getting on a bit, I tried my best to second the pitch as swiftly as possible, but the style of climbing required concentration and patience. So soon enough I reached the semi-hanging belay, and clipped in for the re-racking process once again.

Once all the gear was sorted and I was ready to climb, I really didn’t want to look up and see what was in store for me on my next pitch. I finally lifted my head, and much to my surprise it was……. oh no wait…….. more overhangs and roofs!

I gathered my thoughts and set off into the sea of steepness that barred access to the easier ground. I pulled round an overhanging boss and got some good gear, which gave me the confidence to move back out to the arête. As I gained the arête, all I was focusing on was the climbing and what was above me, but Guy chose this moment to shout, “take a look between your feet lad, nothing but air for hundreds of meters”, Thanks Guy! (hehe) 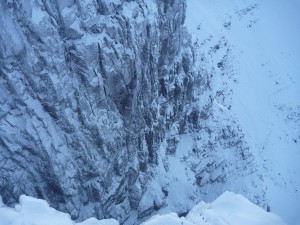 The crag in all its glory. Spot the climbers.

I moved on up and reached the base of the first big-ish overhang. Much to my dislike, everything seemed to sound and feel very boomey, as if it could rip off at any moment. I wasn’t sure if it was just the demons in my head toying with me, after I had ripped a big block off of “Scansor” just before Christmas and took a 15m upside-down fall resulting in one completely chopped rope and a hefty scar on my right knee, but I was not too happy with the steep climbing with all my gear behind scary sounding flacks and suspect blocks. Not very happy indeed! But I pulled my head back to where it was meant to be (focussing on the moves, not the fall potential) and continued upwards and boldly climbed over the second overhang to reach the all inviting easier ground and belay ledge. Woohoo! 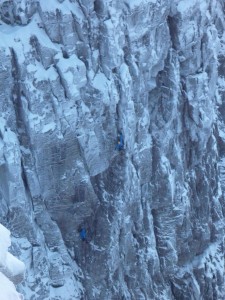 Me pulling on some suspect flakes on pitch three

By this time it was dark and with Guy climbing below me on another awesome pitch, I switched off my head torch and absorbed my surroundings and enjoyed every second of being in such a cool place, on such a cool route, with two good friends.

The next and last pitch was much much easier than the previous ones, and it wasn’t long before Guy and I were reunited with Adam and we all then proceeded to make the easier descent back down to the car. What an awesome day!

After dropping Guy back at Inverness, Adam and I headed to Aviemore to kip in the car once more in prep for a quick route in Sneachda the following day. 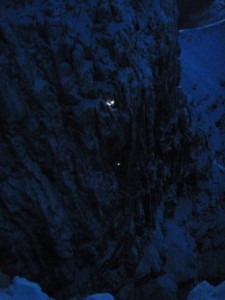 Me reaching the belay on pitch three

Wednesday was another good day with a little more wind than was forecast but still fun to be out in the mountains.

Adam lead “Watch Out” VI/8 which I had done a few years ago, but despite this, I still enjoyed the climbing very much. Knowing that we were having a rest the following day, we decided to jog back to the car for a little more fitness, as you do…..

All in all it was a good three days, and after a good training session last night (sometimes it’s too hard to rest) I’m looking forward to my next winter adventure soon!