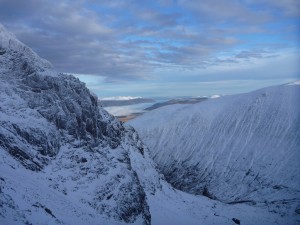 Looking out from No.3

On Wednesday night I headed back over to the Ben with Adam Russell for an early start on Thursday morning. We started from the car at 7am and trotted off to dump our stuff in the hut before heading up to No.3 area for a look at a new line that I had been reminded of on Monday. 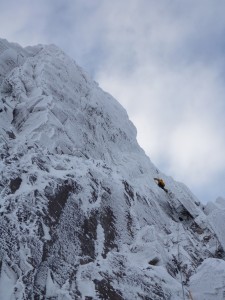 Last year when I did the route “Apache”, I noticed that there was a splitter crack running straight up middle of the buttress between “Sioux Wall” and the crack I was on. So on Thursday, this is what we went for.

It was impeccable weather on the approach to the buttress and as the line came into view, we both got pretty psyched for the route.

Adam lead up the first pitch, which followed the same line as “Sioux Wall” to the belay on the ledge, as for that route. Then I stepped left off the ledge to the left and instead of continuing left into Sioux Wall I headed straight up the thin and techy wall to reach the base of the new crack.

Gaining the crack was pretty hard, but I continued up the wall with the small ledge at 1/3 height in my sights. The placements in the crack improved, but the wall kicked back in steepness just before the ledge. This is where the difficulties started, the gear became worse and the hooks that lead to the safety of the ledge became spaced and more inventive to find. But after some grunting and groaning, I threw my left heel up and rocked up onto the platform. Ahhhhhh……. and relax! 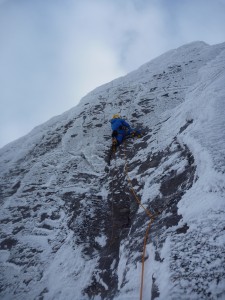 Me setting off up pitch 2 of "Tomahawk Crack"

Adam seconded up the thin wall, and it was cool to see how he worked out the moves from my position above. Once he was on the ledge, we swapped places and I got ready to set off up the steepness again.

Moving off the belay was still overhanging, the same as gaining the ledge below, but this time the feet where tiny and the hooks were also pretty spaced. I made my way up and down the wall, placing high gear and returning to the ledge to relive my arms from the pump and my biceps from the cramp.  After getting some protection up high I decided to give it a shot and boosted up the crack, gaining height with every miniscule foothold I stood on. Once I had committed to an upwards motion, the moves all became apparent and I made speedy progress on the route. As the light was fading and the angle of the wall was easing up, I eventually joined the junction where I belayed after the crux pitch of “Apache”. I continued on up, and after this point the climbing eased up loads and I swiftly ascended through the last overhang and onto the top of the buttress. 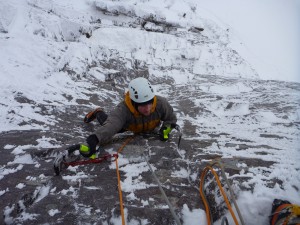 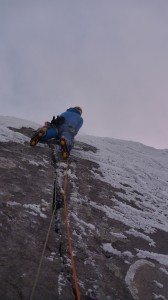 Me leading away from the ledge on pitch 3

I was so psyched to have got the line ticked, and I was even happier that it was home to some 3-star climbing and maybe the best route that I had done in that area of the Ben.

All in all it was the hardest route out of the three on that face, it was a fair bit harder than “Apache” and the gear wasn’t amazing on the first crux, and the second crux is looking at a ledge fall. But the climbing was well worth it! 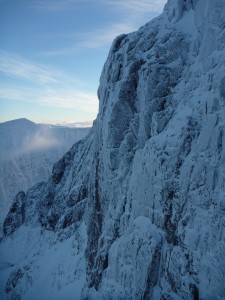 The view of "Tomahawk Crack" (cleaned line) from "Darth Vader"

I would say, in my personal opinion, that “Sioux Wall” is VII/8, “Apache” is VIII/8 and our new route “Tomahawk Crack” is VIII/9. So our route fit it quite nicely with the other two awesome lines on that big shield of rock.

After completing the route and rapping back down into No.3 gully, we headed back to the hut to dry the gear and get some kip, in ready for another brilliant day on Friday.

The next day we headed back up under a bluebird sky to climb “Darth Vader”, a route I had climbed a couple of seasons ago with Ken Lacey, but Adam hadn’t done the line, and I owed him a couple of belays after the previous days antics. So he set off up the first pitch with very little bother and was soon shouting down that he was safe from the back of his cosy little cave that can be found high up on this awesome route.

After seconding up to him, with a bag on, which was definitely I big mistake, we swapped roles again and he lead off over the roof at the mouth of the cave and cruised his way to the belay platform at the top of the crux pitch. 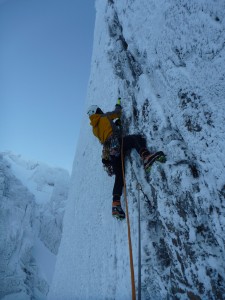 Adam on pitch 1 of "Darth Vader"

Once I had joined him, I grabbed the rack and shot up the last small corner that leads to the top off the buttress, and we found ourselves at the top of another cool route on the Ben and topped off another awesome days winter climbing!

One thought on “Tomahawk Crack VIII/9***”