Over the past two weeks I have managed to get a fair bit of climbing done, both in the Lakes and in the awesome Scottish mountains. Now that winter has returned and that it looks to be around for a while, I will hopefully be getting a lot more done soon. 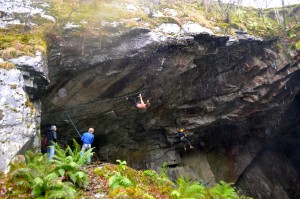 Me flashing "Bloodline" D10, in the rain (the joys of caves)

Two weeks ago today I headed down to “The Works” which is a relatively newly developed tooling venue in the Lake District. It is a brilliant place, and the potential for more easy and hard routes is unbelievable!  If all the potential line were to get bolted it would definitely be on par with some of the best mixed and tooling venues in the world, it’s just so big!

I’ve been down there a couple of times now, and apart from the most recently bolted lines, I have pretty much done all the routes at this venue. There is a bunch of lines ranging from D4-D12 with some awesome 3 star climbing to be had throughout. 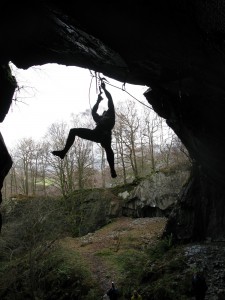 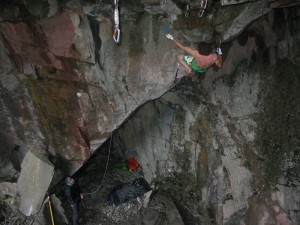 Me on "Guardian of the Underwolrd" Photo credit. Paddy Cave

On my Last visit I met up with Richard Armitage who belayed me as I made the second ascent of “Guardian of the Underworld” D12. This was a route that I had tried on my previous visit to the Lakes. I also managed to bolt a steep and cool looking line of my own while I was there, and I’m looking forward to getting on it next time I’m down. I’m hoping to get down there again soon, but for now the winter conditions have returned, so there is only one place I want to be….in the mountains!

On Sunday Guy and I headed over to the Ben and up to the CIC hut in preparation for an early start on Monday (yesterday) morning. As we walked up to the hut, leaving the car at 9:30pm, we didn’t need to turn our head torches on once. The moon was beaming down and lighting up the sky, and we had an awesome view of a very wintery Ben Nevis for the whole walk in.

Yesterday we got up at 6am, ate our grub and headed off up towards Tower/Gardyloo Gully in search of our intended line. After walking through deep unconsolidated snow for a good while, the snow pack started to feel a little suspicious, and when it was time to enter the narrow gully to the left of “Tower Scoop”, I knew it didn’t feel right. I dug a pit and checked the snow, and straight away we both knew it was a No Go area. Now a little spooked by the overwhelming feeling that we were two very small people on one very big and currently, very treacherous mountain. We turned around and opted for a look at a different line that we had passed on the way up. 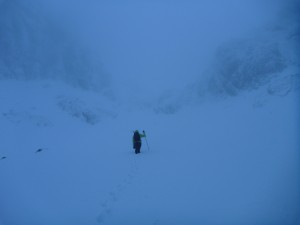 As Guy moved off right in the howling wind to reach the safety of the buttresses and out of the gully, a small (10ft wide, 2inches deep) section of the slope detached from above him and for a split second he went completely out of view under a light wave of snow. The next thing I saw was a very snowy Guy making a hasty retreat back towards me and then we both pegged it back down the way we had walked up and away from the loaded snow areas.

We then walked around to the bottom of the Douglass Boulder, where we had intended to climb, but as we reached its base, the cloud and mist lifted to reveal a very wintery and very tempting looking No.3 Gully Buttress area. Even though we knew it would be fairly late in the day by the time we reached No.3 area, after having walked up and down through deep snow for the past three hours, we also knew that it would be rude not venture up and climb something with the crag in its current, perfect condition. 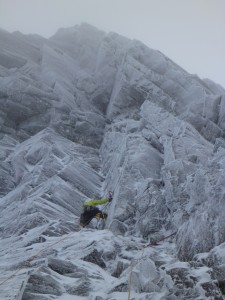 So we headed up and jumped on the line that I had done last season with Will Sim, called “Knuckleduster”. Even though I had climbed this line before, I was happy to get back on it, as it was home to some amazing climbing and I also knew that there was a direct variation to the crux second pitch to do, and that is exactly what we did.

Guy lead off up the first pitch, leaving the ground at around 11:30 and got stuck into the brilliant mixed cracks and bulges that the Ben has to offer. After a thin start and some funky moves, he pulled up onto the belay and I swiftly joined him after seconding.

I then went on to lead off up the icy groove that is capped by an imposing broad roof. I arranged some gear on the wall beneath the roof and then got absorbed by the good hooks and enjoyable climbing. I blasted upwards filled with enjoyment from the awesome climbing, but that feeling was soon replaced with the dull sick feeling of fear that you get when you realise that things just got a bit more serious. I had realised that I had been too absorbed by the good hooks on the steep ground, and suddenly all of a sudden the good hooks disappeared, and so did the opportunity to get good gear. My last good runner was now quite far below me and I was weighting a less than ideal hook/axe placement trying to fiddle in some protection. 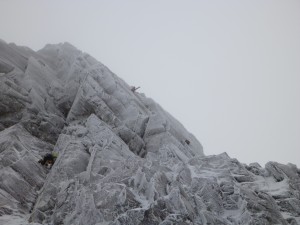 No.3 Gully Buttress getting some mid week action

I managed to tap in a crappy turf hook and a small cam in an icy placement, but the only option in my head was to continue up and gain the awkward ledge on the original route of “Knuckleduster”. So after some heart in my mouth, ballancey and super thin moves, I reached the safety of the ledge and the good gear. I then (after some toing and froing) pulled off the ledge and up to belay as for the last time I was on the route.

Guy then came up and joined me and proceeded to head off up the 3 star corner pitch that cuts its way through the centre of the buttress. I was looking forward to climbing this pitch again after seconding Will on it last season, and I knew how good and how much fun it was to climb. After that pitch it was just up the last short wall for me to reach the top of the buttress and then to the rap point at the top of “Gargoyle Wall”. 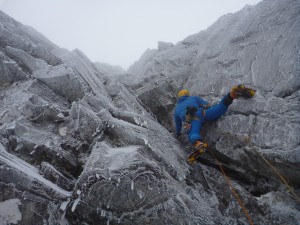 Me venturing into a sea of steepness!

Even with a slightly bolder second pitch then the original route, I don’t think the new section of climbing changed the grade of “Knuckleduster” much, so VIII/9 still seems fair to me.

We then returned to out bags, then headed down to the hut in a fairly strong wind that had been buffeting us for most of the day. But even though we were a bit tired from snow wading in the morning, steep climbing throughout the day and a wind blasting in the afternoon, we both still had big smiles on our faces, as all these things are what makes winter climbing so much god dam fun!!……lets hope it continues.

There was also another teams on “Sioux Wall” and a team around South Trident area, making the most of the awesome conditions.