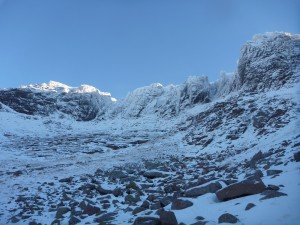 Coire an Lochain in all its glory!

So winter has arrived… On Saturday I managed to get out into the hills with Dougie. Hoping to find some winter conditions, Dougie, Adam, Lindsey and I headed up into Coire an Lochain full of early season psyche and anticipation. 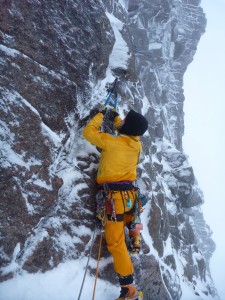 Dougie heading off on pitch one of Bulgy

To our joy, we found pretty much every route in condition, baring one or two super steep lines that hadn’t caught the wind/hoar. So Dougie and I headed off in search of a potential route while Adam and Lindsey headed off to do “Hookers Corner”. We opted to get on the classic line of “Bulgy” which skirts its way around two distinctive roofs.

It was a good route and after Dougie had quickly dispatched the first pitch, I made my way up the trickier second pitch.

I didn’t have any big gear to protect the crux moves around the roof, so I awkwardly stacked two hexes in the crack and with some reassurance from this, made my way up the rest of the route and to the top. 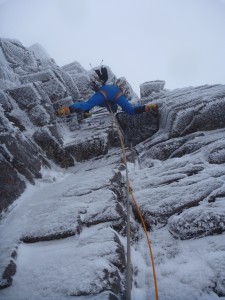 Me starting up pitch 2 of Bulgy

It was awesome to get out in the hills in winter conditions and it felt good too blow away the cobwebs on some mixty moves!

I also managed to get out again yesterday with Guy Robertson, were we ventured back into Lochain for a quick tick of a new line that Guy had mentioned to me earlier last week.

We took a line that follows a steep crack and stepped niche to the right of “The Gathering”. It was a fun wee route that packed a pumpy punch at its start and some awesome varied climbing higher up. 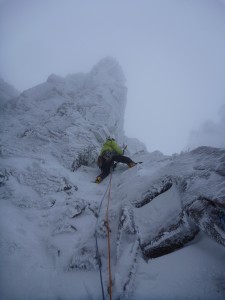 Whether it was early season rustiness or lack of concentration, but I popped off the very start of the crux pitch when my foot blew off its placement and simultaneously so did me axe as I was down-climbing back to the ledge after placing some gear. I was a bit miffed to have slipped off as I felt totally fine, but at the end of the day that’s what winter cranking is all about….the unexpected and unknown, and that’s why I love it!

Another unexpected occurrence on this route was after I had climbed the first overhanging crux crack (from the ground again) and I was moving up the niche, my foot slipped off the placement it was on and for some unexplained and unlucky reason my crampon plummeted down into a world of wind and spindrift (not attached to my foot I might add). Thankfully it landed at Guys feet on the small ledge that he was belaying from, and I was able to down-climb with one crampon to a point where I could to hang from one tool and pull/lower a rope to Guy to retrieve my crampon. I did this and managed to put it back on without having to sit on the rope/any gear, which was tricky, but satisfying as I was able to make a clean ascent of the awesome new “The Candy Shop” VII/9**, and our first (hopefully of many) new route of the season. 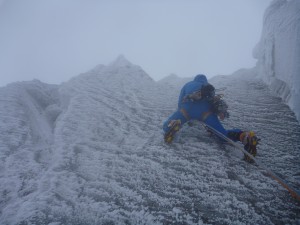 It was ace to get winter climbing again and now I’m just psyched to do much much more….so watch this space for updates soon! 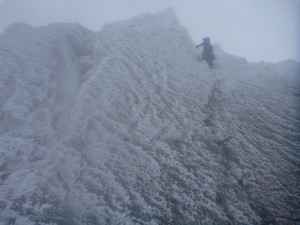 Me finishing the crux of "The Candy Shop"