Last Wednesday I got the all clear from my boss on the farm to have the next week off. So then it was all go for a last minute trip! Dougie and Adam were already planning on driving out to Chamonix on the Friday night, so I just arranged to tag along with them, for a week of fitness training before the Scottish season kicked in fully. Arriving on the Saturday afternoon to amazing weather and an awesome forecast, I met up with the now, local boy, Ally Swinton for some potential crankage in the mountains. As the trip was pretty short notice for me, I didn’t really have any main plans or objectives for the week. So Ally and I checked out some routes and decided to head up to Les Dru for a bash at the well known hard line North Couloir Direct. 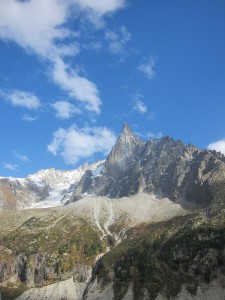 Walking up to Les Dru

As most of the lifts are shut just now during the off season, we had to walk up to the bivi spot at the base of the Dru from the valley floor. Which when you have awesome weather and good company, it isn’t too bad a walk. So we headed off at midday on Sunday with our big/fairly heavy bags full of bivi gear and supplies and walked for the next six and a half hours up hill….the joys of alpine climbing! As we were walking, we knew that the temperature was unusually high for this time of year, and possible too high to get to our intended route. But we bashed on regardless, full of hope and psyche. We reached the bivi spot just as the sun was setting, and after sorting out the gear, eating some food and setting our wake up alarm for 1am, we headed off to bed for a few hours sleep before getting stuck in to the main event. During the night we both found it hard to sleep, firstly – due to the sound of rock and ice fall that was going on all around us, and secondly –  from the fact that we were both sweating our asses off in the unusual high temperatures we were experiencing. Especially for an autumn bivi in the mountains! Not filled with high hopes we awoke at 1am, and after a bite to eat we headed off around the corner toward the base of North Couloir. After walking/slipping through snow that was a consistency that you would usually find at midday on a glacier during the summer months, we reached the base of the first ice sections to find……no ice. As we were discussing our options, our minds were made up for us. At that moment a huge wave of cruddy snow/ice/gravel got washed down from above and over our heads. Without needing to exchange any words we both turned around and headed back down the glacier to the bivi spot. Unfortunately we didn’t get anything climbed on Les Dru this trip due to the high temperatures, but at the end of the day, it’s better to be safe than sorry. No one likes to be climbing a couloir when it is dumping alpine rock on your head. So it was a 4 hour walk back to the valley after catching a couple more hours sleep at the bivi spot. 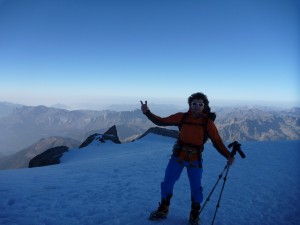 Nice weather up the Midi

Later that day we spoke to Jon Griffiths who said he was also keen to crank in the mountains, and suggested that we all headed back up to Les Dru for a bash at the more reliable, Guides Route on the Petit Dru. After a lot of humming and hawing from me and Ally (not really wanting to walk 7 hours uphill again in the melting heat) we decided to agree and made arrangements to head up the next day (Tuesday). 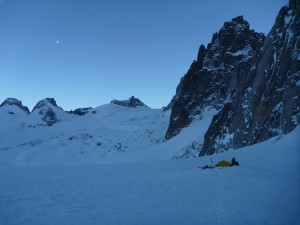 Chowing down on some grub before the route

Tuesday came around and again so did the frustratingly baking hot weather! We all chatted about conditions and suggestions, and after some more humming and hawing, we decided to sack it off. We knew that Jeff and Korra were heading for the same route, but they live out there and could just do something else next week if it was no good. Unfortunately I only had 3 days left of my trip and hadn’t climbed anything yet. Ally and I then changed our plans and rushed to grab the last lift up the Aiguille du Midi with a couple of potential objectives in mind in the Mont Blanc du Tacul area. We trotted down the Vallee Blanche and set up our tent as the sun was starting to set over the alpine peaks. As we ate our freeze dried tartiflette we both stared up at the amazing line of Super Couloir that cuts its way up the summit of the Tacul. Not wanting to risk getting up the next day to find the tedious high temperatures had returned, we decided to make the most of the amazing clear night skies and bright moon, and just go for the route there and then. 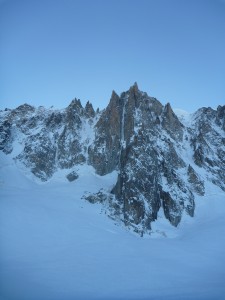 The route in all its glory!

Super excited, we trotted off up to the base of the route and got stuck into what I can only describe as one of the best routes I have done in the Alps to date. I lead off and quickly dispatched the first mixed pitch of the direct start. This was home to some steady but slightly thin climbing to reach the base of the second pitch, which was an icy looking runnel that barred the way to the main couloir. The pitch looked pretty straight forward and I offered the lead to Ally. He respectfully declined and said we would probably be quicker if he did some leading once we were in the main couloir. I agreed and we swapped places and I headed off up the runnel. I soon found out that what looked like a straight forward néve runnel was really a cruddy horrow-show capped by an overhanging ice boss! After a bit of wizardry and some careful avoidance of the huge block that I nearly dislodged that would definitely have crush Ally into the mountain, I reached the couloir and we were on our way to the nice bolt belays and stellar ice that this 4 star route provided. 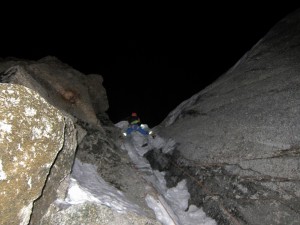 Once in the main couloir, it all went smoothly and Ally led all the pitches apart from the last main one, which I took, and it was described as the guidebook crux. It was 60m of perfect 80®/90® alpine ice that was an absolute pleasure to climb. We finished off the route and swiftly rapped/descended back to the tent under the looming shadows that the moon was casting on us from the huge Alpine faces that were all around. Walking back to the tent, I could think of no better place to be, and enjoyed the absorption you get from climbing by head torch light, especially on this mega classic and stonking line! 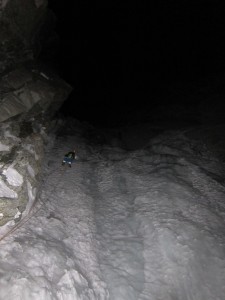 Me climbing the last hard pitch and feeling minuet by the wall of ice!

We grabbed a couple of hours sleep and then after chatting about every route/line we could see from our camping spot, we made the hot and tedious slog back up to the Midi lift station. Then back down to Cham to catch up with Dougie and Adam, who had unfortunately also been melted off their intended route due to the high temps (which proved that Ally and I made the right decision to climb through the night).

The next day, my last, we headed to the local tooling venue in Sallanche, the Zoo. We all had an awesome day and I did a handful of routes from D6-D10 all onsight. This gave me confidence and got me psyched for the Scottish mixed season. Which now that I’m back home, sounds like it has just about started.

All in all it was a fun short trip and I feel that we mode the most of our time and I gained some good fitness being up high for a couple of days. 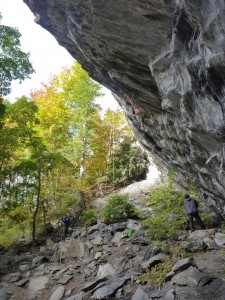 Climbing at the Zoo

Hopefully there will be many more updates over the next few months with info on how my winter is going. But until then………