As I said in my last post, I would soon hopefully be writing about my success on my project at Newtyle cave, and that is exactly what I’m doing just now!

On Sunday, Adam, Dougie, Ross, Mhairi, Steve and I headed up to Newtyle for a day of sending and psyche! Thankfully the sun was beaming down and the usual dank and dingy cave was bright and welcoming, ready for a day of fun and crankage. 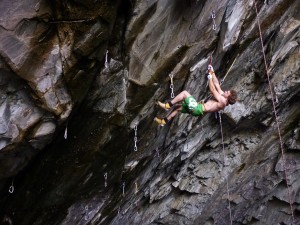 As I had only just got to the second crux section of my route on my previous attempt earlier in the week, I was still not sure if I was fit enough to do the whole thing in a oner. But I was eager to give it another shot with every ounce of energy I had.

After a warm up blast on “Fast and Furious” I did some stretches and watched the others try their intended routes. Once my turn came around, I cranked up the tunes and tied into the sharp end.

As the route Is 35+ meters of upside down power moves, and I came off last time due to fatigue, I knew that I would need to move quicker than before to be in with a chance of getting to the chains.

I left the ground and raced through the huge moves of “D.T.S Spirit” all the way to the last huge stein-pull move that usually goes up right to the “F&F” chains. My route goes left at this point which leads you into first crux section (after already climbing a D12 route). I gassed it through the strenuous and massive moves of the crux section along the big undercut flakes and then tried to relax as I made my way onto “Torchlite” (D11), a route I have climbed many times in the past. 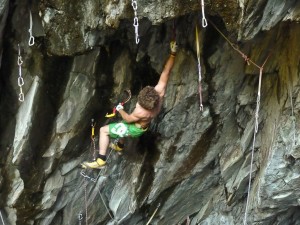 Once at the top of “Torchlite” where the it goes right under the roof to the chains, I blasted my way through the roof directly (second crux) via more crazy long, but this time also very thin moves, to reach the hairline crack up the triangle shaped shield in the headwall at the mouth of the cave. 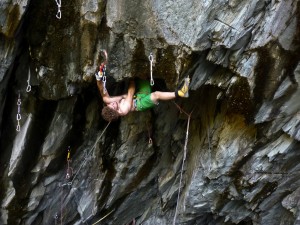 Pulling through the roof to reach the hairline crack. Photo Credit, Mhairi Roberts

After some grunting and very tired groaning, I reached the rightwards trending final traverse of “Big Bad Wolf” (D12). With very little style due to the forearm splitting pump that was making me fight tooth and nail not to let go of my tools, I reached the final hard move. This move was the dreaded mantle out of the cave move, and on my first redpoint of “BBW” earlier in the year, I had blown the route at this point 34m after leaving the ground. But thankfully all went to plan, and I found myself struggling to pull up slack and then clipping the chains. Ahhhh……..and relax.

I felt shocked and ill as I was getting lowered down after clipping the chains. Shocked after having just ticked my project, and the ill feeling was from the raging lactic acid war that had kicked off inside my whole body. But after it had all settled down, the amazing feeling you always get after climbing something hard kicked in and I was psyched to have got it done. 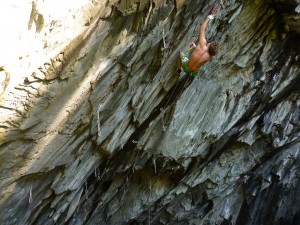 Moving up and left on the final headwall of "Frankenstein". Photo Credit, Mhairi Roberts

So that was my project done, and Frankenstein D13 was created, Newtyle’s newest bolted monster, and the hardest mixed route in the UK to date.

After I had climbed, Adam proceeded to put on a good show of determination and stamina and went on to make the stylish second ascent of my D12 “Big Bad Wolf” that I put up earlier in the year.  This is also a route that is 35+ meters long and takes in loads of super hard climbing throughout the whole length of the cave. 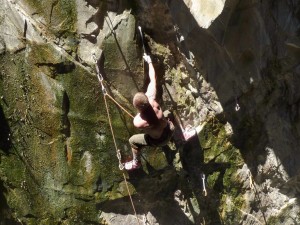 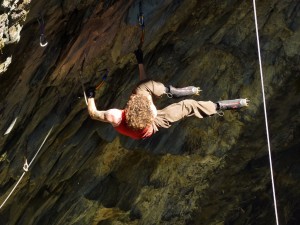 The others in the group worked their routes/ made redpoint attempts, and it is easy to say that more routes are going to get sent in the rave cave very soon!