When I got home from my Kandersteg trip, it was all go go go. I stopped off at the Sunderland wall on my drive home from Chamonix to run a pre-competition master-class for some of the local climbers. This went really well, and the enthusiasm of the centre and the class occupants was awesome to see.

I then carried on home that night and made the 3 hour journey again, back down south the next day for the competition final and post-comp lecture for the locals and the very tired competitors. It was a good day and it was also good to see how well attended the Sunderland Wall competition was, as it was the first tooling comp they had run. Let’s hope there’ll be many more.

Whilst at the masterclass on the Friday evening, I got a txt from my good friend Charly Fritzer who lives in Austria. It said… “Conditions looking good for Ice, you come?” 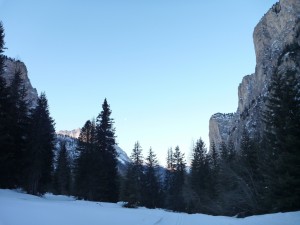 Walking down the Valley

Thats all the info I needed, so I drove home from the Masterclass, booked my flights and re-sorted my already packed climbing gear and got psyched for another mixed climbing send session in another country.

Six weeks ago Charly and I were sat in Simon Yearsley’s house after Charly and Matthies had hired a Big Tree Campervan for their Scotland send session during January. I picked up the Climb Magazine photo edition and started to flick through it, I stopped and looked at a photo of the mixed route in Italy “Illuminati”. Charly swiftly said

“ahhhhh Illuminati, I really want to climb that line this season”

“yeah me to, it looks awesome”

and Charly being Charly just comes out with

And that’s exactly what we did! 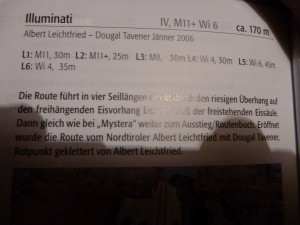 On Sunday the 12th of Feb I flew out to Munich airport where Charly picked me up. We then made the 3hr30 drive to Val Lunga where we kipped in a small ski guest house ready for a day’s cranking the next morning. 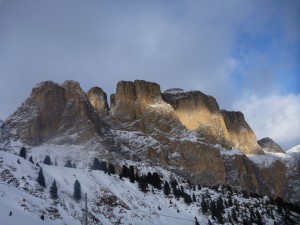 As we walked down the immaculate valley, it was unbelievable how much rock was looming overhead. The huge intimidating Dolomiti towers where staring down on us as we ambled through the trees on the valley floor. Almost as if they were daring us to try and attempt one of the most sort after Ice/mixed this country has to offer.

But we trotted on regardless and as soon as we got to bottom of the leftward branching valley and the ice section of “Illuminati” came into view at its top, all our worries and anticipation went out of the window…..we were PSYCHED! 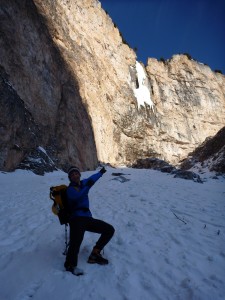 After the long slog up the avalanche track we approached what can only be described as the Giant’s Lair. It was a huge overhanging cave with 70 meters of ice dripping over its top. What more could you ask for?

Charly and I knew that the route had a reputation for being hard, but that had never stopped either of us in the past. So we sorted our gear and got ready for the fight.

On day one, Charly sent the route almost onsight, only to slip off on the second pitch when a crumbly hold broke off and he slumped onto the rope. I got the first pitch second go and then followed Charly up the whole thing as he was keen to try and ground up the route. 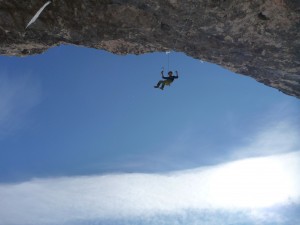 The ice pitch was totally fine with such featured ice that it was like climbing a vertical staircase of big hooks and easy foot placements. For me the M8 pitch was the scariest of the entire route. After the bolts ran out, you had to make your way up to the ice that was too thin for screws, the rock quality got even worse than the previous two pitches (if that was possible) and you felt like you were climbing a vertical semi frozen beach!

But it all went to plan, and by the end of day one Charly and I had freed the 5 pitch wonder route that is “Illuminati”. This was awesome, but I wasn’t satisfied with my ascent. I really wanted to lead the spicy bits of the route. So we held off on the celebrations that evening so that we were ready to do it all again the following day. 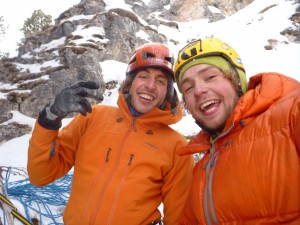 Charly and I at the top of Illuminati

The next day was a bit harder for me, both physically and mentally. It was my turn to lead the route and having already climbed it the previous day, my muscles were not as psyched as I was to get back on the unbelievably steep first two pitches.

But after some huffing and puffing the route got sent fairly swiftly and as Charly was the day before, I was also uber psyched to have also lead “Illuminati”. 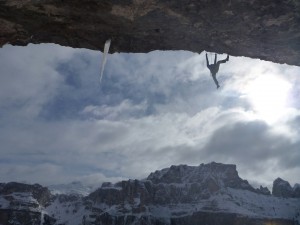 Me on the steep and pumpy pitch one

The second pitch didn’t go down without a fight though. On my first go through the roof my axe ripped as I was turning the lip, and I took an upside down fall which resulted in me dropping a tool. This is never good, but thankfully we had packed a spare tool in the haul bag (small rucksack) in case this very thing happened. So I got the pitch sent on my second go. But again the route put every hurdle in our path as possible, and a hold ripped as I was climbing the roof. This time I was left hanging from one tool 50m off the deck with nothing but air bellow me. I managed to throw up my other tool and gingerly carried on for the send.

That night we decided to maybe celebrate just a little, and the next day we opted for a low level, easy accessible ice route which was home to some awesome features and enjoyable climbing. 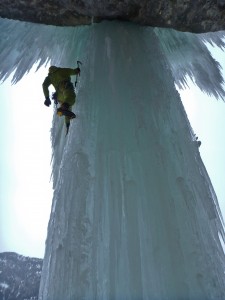 Some easy ice for the rest day 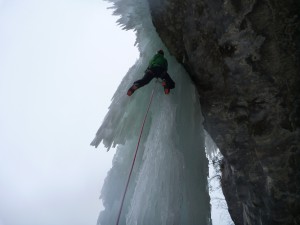 Charly doing what he does best

On the Thursday (my last day) we had arranged to head back up to “Illuminati” with a photographer for some photos, but the photographer called in sick and had to bail. Unfortunately Charly and I had stashed most of our stuff in the “Illuminati” cave 1hr15 up the valley. So on our last day and under a bluebird sky and beaming sun, we ambled up to the cave and just chilled in the sun. 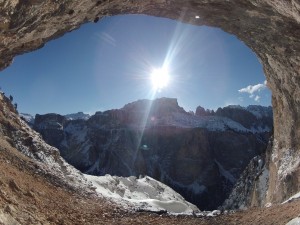 Charly did put some effort in though, and climbed the crux pitch of “El Diamante”  the neighbouring M11 which looked far too loose and chossy to bother with. So after I had retrieved one or two of my draws from “Illuminati” I just sat in the sun and relaxed, happy with the trip.

“Illuminati” was an awesome line and the steep and hard climbing style was super fun. With the ice pitch at the top being the icing on the cake for me. What a line!

And in the broken English words of Charly…. “It was gart to climbing with such a friend” (it was great to climb the route with such a good friend),  which it was!

Below is a link to a short video that I made of ascent of Illuminati. Unfortunately the quality is not the best due to me not knowing how to upload a larger file. Anyway, I hope you enjoy.