Since I arrived in Kandersteg with Adam Russell last Monday, I have managed to do some really fun routes at some amazing crags. 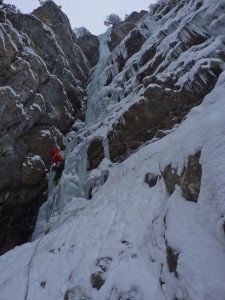 Adam on the first pitch of "Groll"

On our first day we headed into town early and grabbed our food essentials for the week. We also popped into the local climbing shop “Alpine-Center”, to ask if they had any info on the current ice and mixed conditions in the area. Thankfully the guys in there where super helpful and told us pretty much every route that was in condition and which areas to avoid due to avalanche risk or bad ice.

After this we decided to check out Oeschinenwald area which was one of the most accessible from the town for some afternoon ice cragging. We ended up doing “Rattenpissoir / Groll” which is an awesome WI5+ that had a nice, if not a little wet, steep pillar which blew away all the rust and cobwebs from not having climbed water ice in a while. 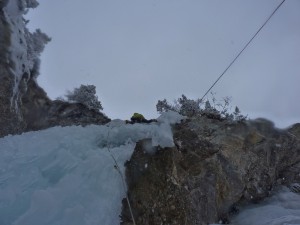 Me on the second pitch of "Groll"

After this route, Adam and I decided to head back to the scout lodge, where we were staying for the week, and settle for an easy first day. Ready for some sendage at Ueschenen the next day.

On Wednesday we headed up the valley and after following some very broken directions in German, and a couple of detours due to taking the wrong path, we eventually arrived at the ice/mixed playground that is Ueschenen. 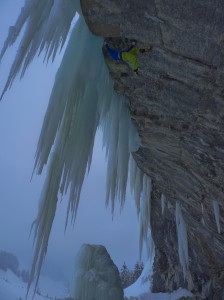 Me reaching the ice on "Pink Panther"

As this crag gets no sun during the day and the temps where forecast to be around -16’c at the warmest, it was a bit of a task to get warmed up. But by the time the hands where no longer numb and the muscles were less rigid, Adam and I got stuck into sending some really cool routes. 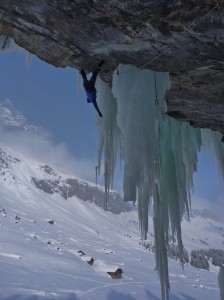 Firstly we did the super classic “Pink Panther” M9+ which is a route Adam and I had both wanted to do for a good few years, ever since we had seen the picture in the Tim Emmet and Neil Gresham book “Preposterous Tales”. We both got the route sent quickly, and after that we moved onto the neighbouring route to the right “Twin Towers” M10.

Due to the nature of the crux of this route, which involves swinging for a blind pocket (latching it) and fully releasing your other tool and committing to the move, unfortunately I came off on my flash attempt when I thought I was in the pocket, but wasn’t. I managed to get the route on me second go just as the torturous freezing fog rolled in. Adam also had a good few attempts on this line, but came off high on the route on his last go of the day. 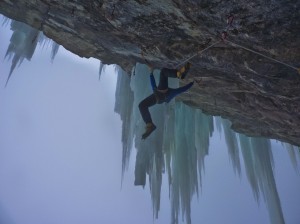 Me mid crux on "Twin Towers"

I then moved right once more to the next route “Matador” M11, but as it was late in the day and the Baltic fog was totally draining any energy stores we had left, I tried the moves but we then decided to head back down for some food and warmth. Saving the tick for another day.

On Friday after a rest day and which also happened to be my 21st Birthday, we headed back up to Ueschenen psyched and ready for another day of mixed madness. Unfortunately our psyche was soon smashed when we reached the crag to find the air temp was around -19’c, but this time there was a stiff breeze which totally destroyed any hopes of staying warm throughout the day. 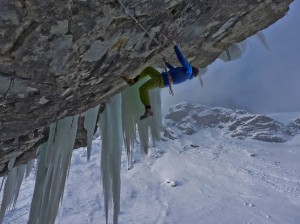 Me on "Matador", a nice way to spend your birthday.

After running around the crag at full speed with three down jackets on, I eventually felt like I could maybe muster up the courage to go for my route. Thankfully, once I was climbing I managed to get my head in gear, and after blasting through the bouldery moves, I found myself clipping the lower-off on my first go. I was pleased with this, as the temp and wind seamed to get colder later in the day and I wouldn’t have wanted to try the route in the even cooler temperatures!

Adam managed to tick “Twin Towers” on his first go of the day, and was robbed of the tick of “Matador” when he popped off one of the last moves on his final attempt.

On Friday evening we got back to the lodge to find that Adam had an email from his work stating that he had to head back offshore on the evening of the 6th and would have to be back in Britain for this date. This was bad new as it would mean our trip would be cut short and we wouldn’t have time to get all our intended routes done.

Despite the day news, on Saturday we headed out in search of some steep ice. We headed for Rubezahl which is a classic hard WI 6 in the Staubbach area. Again the air temperature was -19 or below and we knew the ice would be brittle. We decided to have a look anyway and once I got on the route I soon knew that brittle was an understatement. 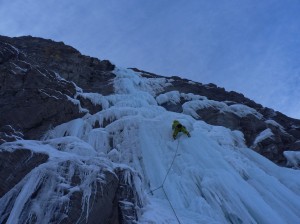 Me on the first pitch of "Rubezahl"

Due to the fact that in the last week the temperatures in Kandersteg had plummeted rapidly, this had caused the route (which had apparently not been in condition in a while) to form in a very fragile multiple individual icicle formation which is not suited, or the most fun to climb. So after the first pitch, and looking up the second pitch (which was surprisingly wet) we decided to bail. Not wanting to get wet and then freeze our asses off, while not enjoying the climbing.

So we opted to use the rest of the day as a semi rest day and then try and get one last route ticked on Sunday before Adam had to leave.

My plan once Adam had headed off to work was to jump on a train and head over to Chamonix to see my Dad, who is working over there at the moment. And maybe salvage my last few days away with some French climbing. But when I spoke to my Dad on the Saturday evening he said he had a day off on the Sunday and would be keen to get over to Kandersteg to check it out, and also get some pictures of us climbing, then take me back to Cham with him…… Result! 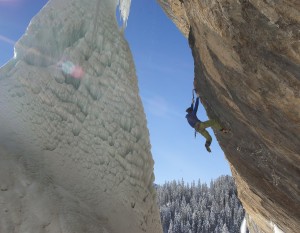 So yesterday morning we met up with my Dad and headed off up to Oeschinensee for one last mixed hit before we left Kandersteg. The good thing about this venue is that it can be reached by a downhill walk from the top of the ski lift, and the even better thing is that you can descend via hired sledges on a piested  sled run all the way back down to the car, I was PSYCHED!

So we arrived at the breathtaking frozen lake under a totally blue bird sky and the beaming Alpine sun. Our intended route was “Kraftort” which was a steep and thin M11 that takes the wall behind the awesome looking WI6 “Kraftwerk”. Unfortunately the WI6 wasn’t formed, but “Kraftort” was in good condition with a thin ice fang hanging down from the top of the steep rock wall. 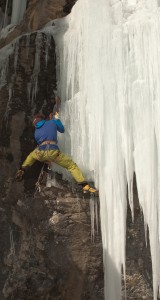 The route wasn’t the best climbing I had done in Kandersteg, but the line looked totally awesome, so I was really eager to get it ticked. But time was against us and we only had a short day to get it done. Adam went on first trying the moves and soon found out that a lot of the holds had been previously broken off due to the snappy nature of the rock. And that we would have to be careful not to snap any of the remaining tiny crumbly flakes if we wanted to get the route ticked.

I then jumped on the line and swiftly figured out a sequence for the moves which involved some huge throws between holds. The moves obviously hadn’t used to be as big, but with lots of holds now missing (visible from the rock scars and blown pockets) this was the only way I could see to do it.

Adam then went for the redpoint and unexpectedly pulled of a hold that smashed him square in the face. After I realised he was ok, my thoughts soon went towards whether the route would still be climbable without that hold. But Adam pulled back on and found that it was still good for the taking.

So after another warm up go and feeling the last day of the trip pressure, I managed to get the route sent. But not without a fair amount of battling, huffing and puffing, and some sketchy moves trying to gain the thin Ice at the top. 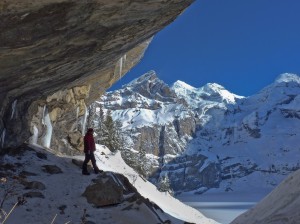 But all in all it was a good day, and hurtling down the empty slopes back to the car on our sledges was definitely the best way to end a good week in Kandersteg.

I’m in Chamonix now, so hopefully I’ll get some climbing done while I’m here before I head home later in the week.