The Past couple of week have been pretty hectic for me. I was climbing with my Austrian friends for a while, then after that it was time for the BMC International Meet.

During this time I met some awesome people from around the globe, climbed some awesome routes and had a totally brilliant week. 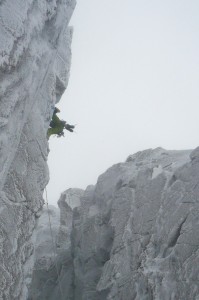 Crazy footwork on The Hyperventilater

I have done a fair few routes since my last post, and I’m out in Kandersteg at the moment, so I’ll probably do a fair few more. But for now here is a list of my most recent ascents and a little info about one or two of them.

-The Hyperventilater IX/10 (FA) – Just before the International Meet Will and I headed into Lochain to bag a quick route on the Sunday before the weeks hosting commenced. The route takes the steep faint overhanging crack line on the left wall of the Vent (to the right of the “Big Daddy Corner”). The route is still waiting a clean ascent as on my last ground up attempt, I came off one move from the easy ground. But pulled back on and finish the route. The second pitch takes the obvious large corner above and right of the terrace. 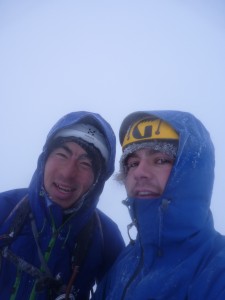 -“Pfugga-Lule” VIII/9 (second ascent), with Masu Ryo – This route was put up by the strong Austrian team the previous week and takes the steep bulging wall right of “Happy Tyroleans” 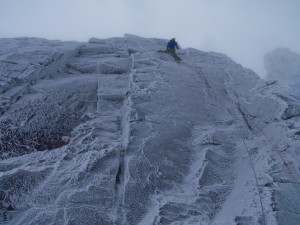 After the international meet, James Dunn and I headed up the Ben for one last route before I nipped off to Switzerland. We managed to make the second ascent of the well renowned aid route that Dave Macleod had freed a few years ago “Don’t Die of Ignorance” XI/11. 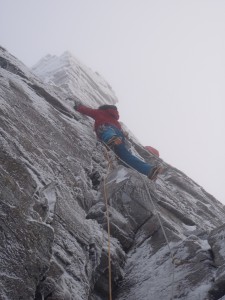 I had had two attempts on the route on Friday with Jen, but dropped my axe (knocked it off its placement while placing a cam) on my onsight attempt. Then on my second go I pulled trough the crux but the tiny hold I was using ripped off and the attempt was over.

But you know what they say – “Third time lucky”, and surely enough, Incident free and fairly smoothly, on Sunday James and I made the second ascent of “Don’t Die”. 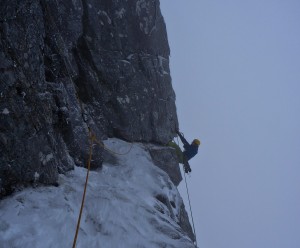 Me entering the crux of "Don't Die"

I was psyched to get the route and even though I was truly gripped and terrified on the cruddy, thin and super technical snow/ice wall above the crack, I was pleased to really enjoy the climbing (once it was over).

So as I said earlier, I am In Kandersteg Switzerland at the moment for 8 days. So keep an eye on my blog for updates on what Adam Russell and I are getting done.