So yesterday it was sendage all round at the Newtyle cave. I headed back with Adam, Harry Holmes, Joanna Lisowiec and as James had sent his project (Torchlite) earlier in the week, he came along as the token photographer.

Most of us had routes we had been trying and we individually readied ourselves for some sending action. I warmed up on the top half of my project and felt surprisingly good through the crux section and onto the headwall. But I knew fine well that when I reached this point from the ground after 20 meters of climbing it was going to feel a little less straight forward!

After this, whilst James was scuttling around setting up ropes for a day of filming, I belayed Adam on “Torchlite” while he warmed up working the moves so that he had it dialled for is redpoint later in the day. During this time Harry and Joanna headed outside to the lower routes to get warmed up and get some millage ticked before venturing onto the steepness. 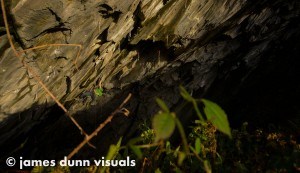 Once Adam was down, my turn was swiftly approaching and those pesky redpoint butterflies where bouncing around in my stomach. I jogged down to the lower routes to ask Harry if I could grab a belay off him when he was free. I was going to need two belayers and two ropes on my route to reduce the rope drag caused by the wandering nature of the line.

The run back up to the cave definitely got the blood flowing and cleared my head, and once I was tied into the sharp end I felt ready and psyched for the send.

I set off up the first moves feeling good and after a couple of annoying mistakes I had joined the steep line of “Torchlite”. I moved up this line feeling not too pumped and found myself reaching the point where I would break out left into the crack of “Training For Something” and swap ropes. After this came the crux, which I had never climbed through from the ground before, so I was psyched to pull through the huge moves to reach the upper pod on “TFTF”.

At this point I was totally boxed and my forearms were pumping with lactic. But I focused on the lip of the head wall and charged off left back into the steepness. I then found myself with only one hard move to do before I was on the slab and I could almost taste the victory. But it was not meant to be. Feeling pumped and a little flustered I moved up and clipped the second last draw, only to realise that when I moved up I had knocked my tool out off the placement where I had left it below and it plummeted to the ground. 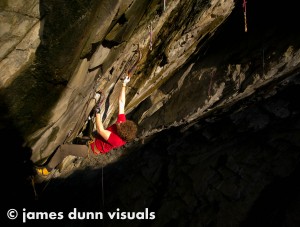 Me sending The Big Bad Wolf

After 35 meters of climbing, my attempt was over. I’m not going to repeat what the next words where that came out of my mouth, but I will say that I probably wasn’t much fun to be around for the first hour.

But it was still early in the day and Adam was psyching himself up for battle. He also set off from the ground looking calm and psyched. This seemed to pay off as he managed to tick “Torchlite” with very little effort and got the ball rolling for a day of success (although at this point it didn’t feel like it to me).

After about two hours I decided that it might be time to give my route another go. But in the back of my mind I didn’t have much hope for this attempt. I felt more tired than when I left the ground the first time, plus I had never climbed through the crux, before my last attempt never mind twice in one day. But I tied in again and set off up the steepness for the second time.

This time I managed not to make the silly mistakes that I had on my first go and despite feeling like I had less power in reserve, I definitely wasn’t feeling as pumped as on my first attempt. This gave me a new found confidence and before I knew it I was swapping ropes again on the tenuous hook, and then charged into crux section ready to give it my all.

I soon found myself at my previous high point and this time I was not going to drop my tool! I reached up over the lip to hook the tiny flake, then swung my foot up and rocked over onto the slab.

Even though the lower unclimbed section of the headwall had been bolted and the placements drilled years ago, the slab section was left natural (apart from the bolts), with thin hooks on edges and in cracks. So even though I had passed the steep climbing, I still needed to keep it together on the tenuous section to reach the chains. But this all went to plan and I was soon lowering to the ground with the redpoint high flowing through me. “The Big Bad Wolf” D12*** was ticked. 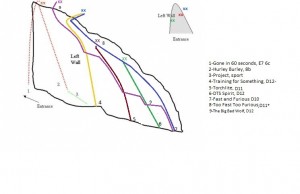 With Adam and I having ticked our routes. It was down to Harry to get his route “F&F” to finish off the mass day of sending. And this is exactly what he did. 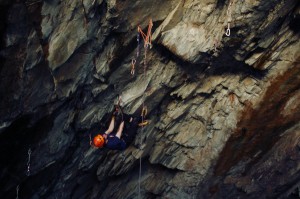 Having only had a couple of shots on the route before, and having never linked the crux section, It was very impressive to see him cruise through the lower half and move smoothly through the crux to reach the last clip. After a bit of huffing and puffing (as to be expected) he finally clipped the chain, and the route was his.

It was awesome to see everyone get their routes in the cave yesterday, and it was also good to see that psyche and enthusiasm definitely rubbed off on each other, helping us get our routes.