Since my last post about “Stone Temple Pilots” I have had a couple of fairly interesting (wet) but successful ventures into the mountains and one failed attempt at a new line. But on every occasion I have had good fun and a laugh with my mates. So as always, it was well worth it. 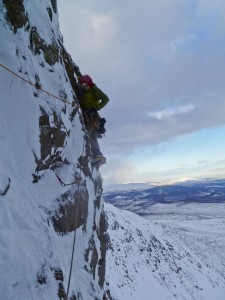 Will on the first pitch of Scarface Wall

Firstly, Will and I headed into Lochnagar to attempt the well known line of “Crazy Sorrow” which is a hard line going at the fierce grade of IX/10. Unfortunately this attempt was short lived due to the conditions, so Will and I headed off in search of a plan B.

We ended up climbing all the independent sections of “Scarface Wall” VIII/8 up to the point where it meets “Straight Jacket” and then decided to rap off and head home. There was also talk of this being the second ascent of “Scarface Wall” but as we did not do the whole route, this isn’t the case. But what we did was good fun and helped salvaged the day with some awesome climbing. 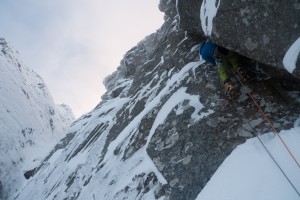 Me on Scarface Wall

I then went on to meet up with Ian Parnell for three days just before Christmas. Unfortunately the weather forecast was hideous for this period, but we did manage to get a route done in the mountains before it totally crapped out.

Ian, James Dunn and I headed into a very wet Loch Avon basin to climb a quick hit on Carn Etchachan on the first day. When we arrived at the top of the crag in the morning before abbing into our route, the whole crag was very white and in perfect winter nic. But we all knew the forecast was to get very warm, so we swiftly got stuck into some new routeing on the awesome face. 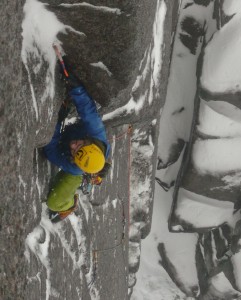 Me reaching the belay on the FWA of "Jumping Jupiter"

We made the first winter ascent of “Jumping Jupiter” which is a techy summer E2 that takes a boldish slab and two roofs. I lead the first pitch which turned out to be strenuous in the first section and then bold and technical in its upper half. Ian went on to try the second roof pitch, but after some impressive attempts, the sharp end was handed to me.

I also tried to head through the capping roof directly above the belay. But as the temperature was rising I decided to turn the roof on the left, climbing the arête. I then made a rising traverse up and right to regain the summer line and finished as for that. This turned out to be a very fun and techy VIII/8 and helped us salvage Ian’s venture North with a route in the mountains.

After the route in the Gorms we headed back towards Fife the next day and stopped off at Newtyle quarry for a couple of routes and a bit of training. 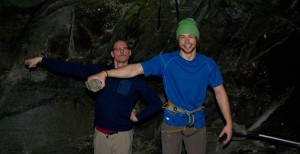 Ian and I warming up at Newtyle

With the weather looking warm still for the next day, we opted for a pumpy training session in the tooling cave at my house. This was a good way to end the three day hit and also helped me tire myself out before the Christmas relaxation started.

After dropping Ian off at the airport, I headed home and hung up my tools for a couple of days while the festive activities of eating and sleeping took over.

Since Christmas I have only had one day in the mountains, and this was a failed attempt at a route in Lochnagar with Guy Robertson. Even though we didn’t manage to get our route ticked, it was fun to be out in the hills and good to blow away all the crimbo cobwebs. All good except for the fact that I found out that my camera was buggered from the wet day on Carn Etchachan with Ian. Which wasn’t ideal! 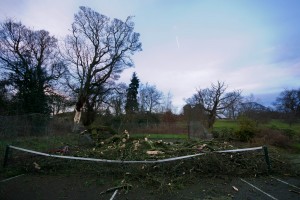 The wind takes no prisoners

Since then the weather has been very bad with super high winds and fluctuating temperatures that seem to be causing havoc in the mountains and at sea level. So recently I have spent most of my time in my training cave and also decided to re-open up the wonder project in Newtyle cave.

Having had a couple of session in the cave, I am starting to feel fit again and hopefully will get my project sent before the winter arrives in Scotland for round two of sendage! 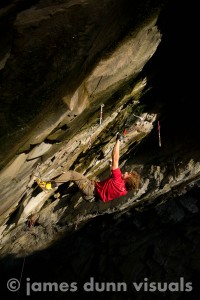 Training in the Rave Cave