I’m tired, my muscles are sore and I’m dehydrated, but that’s a worthwhile price to pay for doing the route Will and I did yesterday.

On Wednesday evening Will and I headed up to Aviemore to stay the night in James’ parent’s house on the outskirts of the town. We where planning an early start on Thursday morning so it was nicer to stay in a house then to kip in the back of my car in the Cairngorm car park. 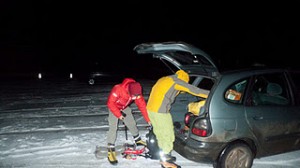 Once at James’, we sorted out our gear and tried to match our intended route description to some guidebook photos and other routes info.

When we left from my house to drive to Aviemore, our plan was to head over to the Shelterstone for a bit of a recce mission and maybe try an easier line up the face to familiarise ourselves with the crag as neither Will nor I had climbed there before.

But earlier that day I had been speaking to Guy about his and Macphersons’ route “Stone Temple Pilots” and had asked him for the route description for later in the season. As we were driving North, Will and I were discussing routes on the Shelterstone and “Stone Temple Pilots” came up in convocation. Wills’ next comment was “Should we just do that tomorrow instead?” and my reply “YEAH BOI!!!! And the plan was made.

So we set our alarms for 2am and headed to bed filled with anticipation and thoughts about the following days challenges and delights.

As is often the case with early starts, it seemed to come around way too quickly and before I knew it I was walking away from my car and off in the direction of Coire an Sneachda on the way to the Shelterstone. 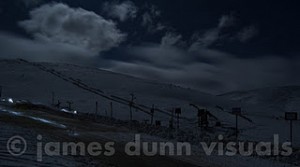 Walking in from the car park

We reached the bottom of the route in total darkness, apart from the odd shooting star that zoomed overhead in the clear night’s sky. After sorting gear and ropes, I headed off up the first long pitch of the “Steeple”.  This pitch was home to some techy and thin climbing that was time consuming due to all the snow and cruddy ice on the slab and in the cracks. But I managed to make fairly good time and I was at the belay and bringing Will up the pitch by the time it got light.

The next pitch seemed to go ok and Will made short work of the short nippy section at the end of the second corner. I swiftly seconded that pitch and ran up the next short pitch to the base of the steep and sustained crux. 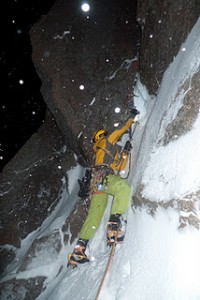 This is where the route really started to show its true colours and I got put through my paces as I fought my way up the sustained and tricky fractured wall. From below I thought the pitch looked ok and not that steep. But as I started up, the pick placements  were good and the moves were big and fun, but then the angle started to really kick back and I found myself getting pumped on overhanging technical sections that felt super hard. To be honest, I made it to the belay only by the skin of my teeth. I thought the pitch was hard, super steep and technical which would be worthy of grade IX/9 in its own right! Which usually would be fine, but knowing we still had 4 hard pitches above this really started to play on my mind as I belayed Will up the next shorter techy slab pitch.

After Wills pitch he belayed on a big turfy ledge that we joked about biviing on to try and get some rest as the route was starting to take its toll. Above the left end of the ledge was a nails looking crack which looked steep and energy sapping. I started up the crack with every move making my arms cramp up. After a bit of route finding issues to where we needed to swing round the arête, I soon made the long reach into the big crack and up onto the easier ground to what I thought was the big terrace below the next pitch. 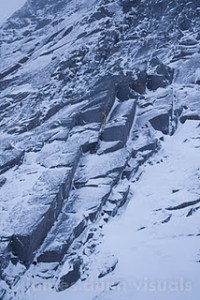 Will seconding to the first belay

As I was bringing Will up the pitch I realised that I had belayed in completely the wrong place and from where I was it was going to be very hard to gain the proper belay. So I shouted to Will to take out my last runner, which thankfully was 10m below me, then head right up the turfy groove to reach the correct terrace and belay as for the route. Once he had done this it was getting dark, so I headed back down to where he had climbed the groove and ascended this to meet him. Unfortunately this took a bit of faffing around and by the time I had reached Will on the correct belay it was totally dark and the starry sky was again in full view. 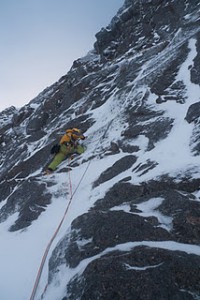 Me approaching the crux pitch

Thankfully we had expected to start and finish the route in the dark, so we fired up the head torches and Will got stuck into the next pitch. This pitch was also very sustained with a spicy crux section and some blind hooks to gain a small pod. After this there were some techy sections into a steep and awkward finish out of a capped groove. Once Will had shouted safe I stuffed the packet of Haribo that I had been munching on to try and get something from the sugary goodness, back into the bag and shout to Will how hard did the next pitch look. He replied with “It looks good” which I took as code for HARD! But I set off seconding his pitch anyway and tried not to think about what was ahead until I got there. 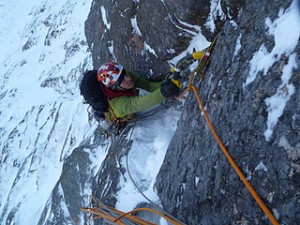 Will seconding the crux pitch

I reached the belay and as soon as I looked up my biceps started to cry. “Mate, it looks nails” was my first comment, but we exchanged the rack and I moved up to the base of the last steep wall of this mega route. After starting up the shattered wall I thought that the hooks where good until I moved right into the baggy crack that needed to be climbed to gain the snowy ledge above. I climbed the crack, but couldn’t find a way to get onto the big ledge. Due to the huge mass of snow on the ledge, no ice had formed and there was no turf to be seen to get an axe to stick in to mantle onto the shelf. After some failed attempts to gain any height I shouted for will to “watch me” and threw my right foot above my axe and proceeded to push down my tool to try and rock onto the ledge. This didn’t really work and as soon as I got my foot up I was totally off balance and slowly falling backwards. In a flurry of panic I punched into the deep snow with my right fist and tried to use it to help me rock over. The first time it just pulled through, but as I was now pretty much about to fall I gave it one last punch and threw my body forwards. Much to my surprise I then found myself lying in the deep snow on the ledge, it had worked. I stood up and swiftly climbed the steep but very enjoyable corner which leads to a big terrace. 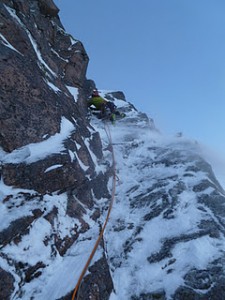 Will leading up the techy slab

I could now see the summit and there was only about another meters 10 of climbing to go before we had cracked this long and tiring route. Thankfully the last overhanging corner was fairly straightforward compared to the previous section and a few minutes later I was standing on the top of the Shelterstone. 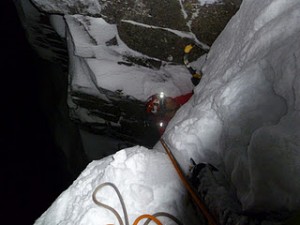 Will reaching the top

Whilst belaying Will up, I couldn’t stop my hands and forearms from going into awful cramps. But even though the cramps where painful and I was completely exhausted, I looked around at the moon beaming down over Loch Avon and the numerous shooting stars flying through the sky. There was nowhere else I would rather have been at that point! What a way to end an awesome day on an even more awesome route.
Check Wills blog for his thoughts- http://willsim.blogspot.com/