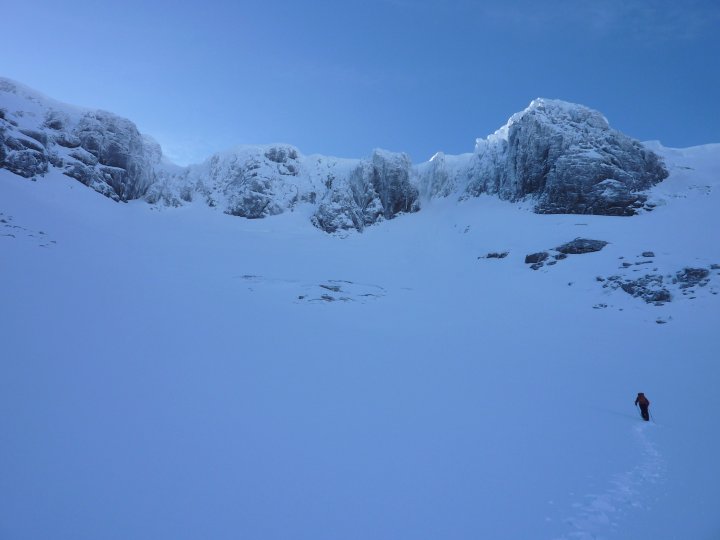 Above and Below: Approaching the route 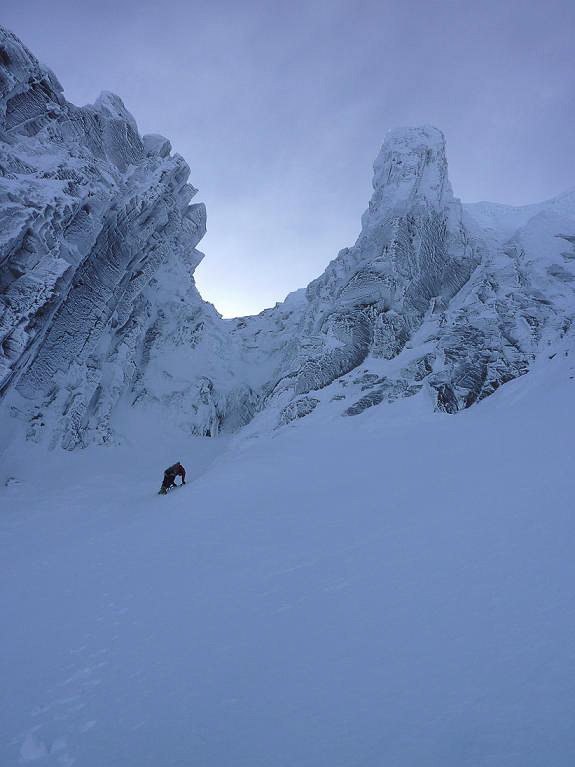 After returning home at 1 am on Sunday morning from my antics on the Ben, I caught a few hours sleep before waking up and checking my emails. I had a message waiting from Guy Robertson asking if I was keen to head into the Gorms on Monday for some more mixed winter action. 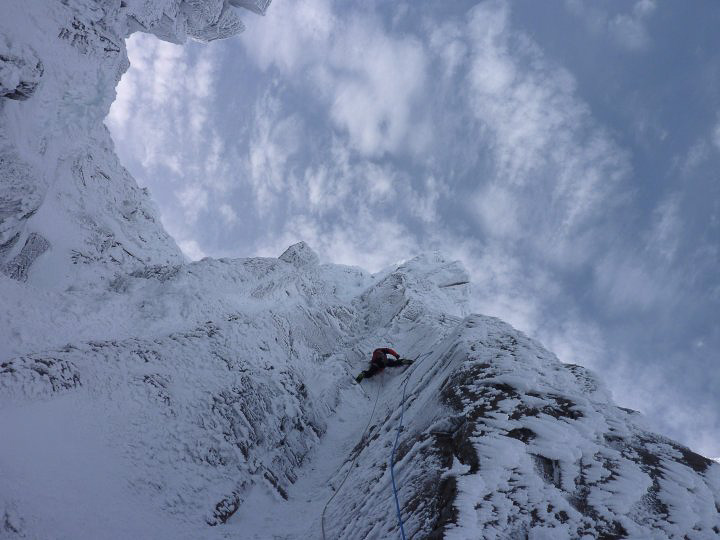 Above : Me Leading the first pitch
I unpacked my wet climbing kit from the day before and flung it all on the radiator to dry out so I could head up North later that day. On Sunday night I kipped in my tent in the Cairngorm car park and met up with Guy yesterday morning bright and early. 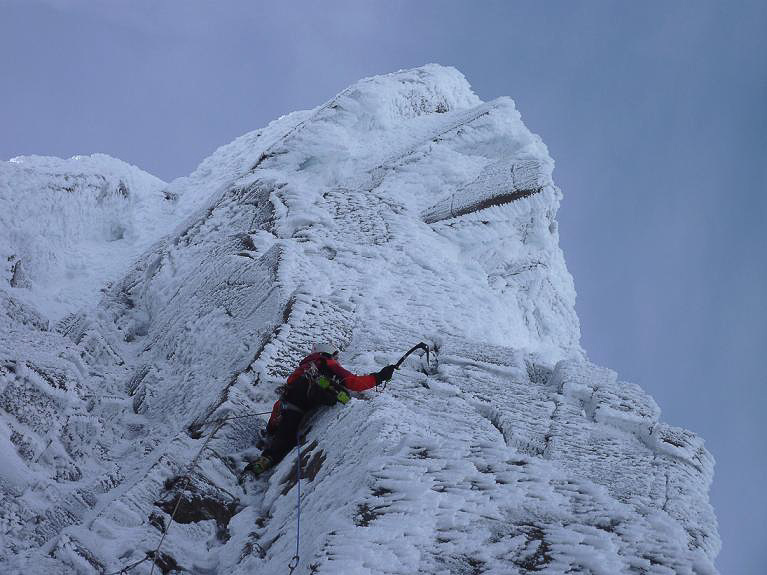 Above: Me looking for blind hooks on the first pitch
While we were walking into Lochain the sun was just rising above Sneachda and there wasn’t a cloud in the sky. We both knew it was going to be a good day and as it was the first time we had met, we swapped stories and gathered up the psyche for the coming day’s climbing.
Below: Making the teetery thin traverse. 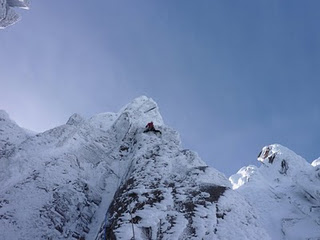 When we grew closer to the corrie it was obvious that most of the routes were in perfect winter condition and some were well buried under a thick covering of hoar frost, which always makes for a fun days climbing! After kitting up and ditching our bags at the base of the corrie we started up the steeper slopes to the base of the main central pillar where our intended route loomed steeply above. 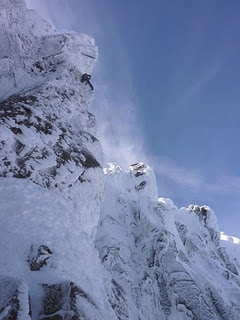 Above: The belay is in site, (thank god!)
I think it’s safe to say that anyone who has seen the DVD “Hard XS” would agree that Ian Parnell and Tim Emmet’s route “Pic n’ Mix” is one to aspire to; I was most definitely one of them. Standing beneath it now certainly didn’t change my opinion. I wouldn’t be ashamed to admit that I was excited and scared in equal measures. This was evident from the discussion with Guy about whether or not to attempt the route considering its particular condition: a heavy build up of hoar frost on the upper sections which would definitely mean a lot of clearing. However, we decided that there was no harm in trying and got ready for what would become the battle of a lifetime.
Below: Guy approaching the first belay 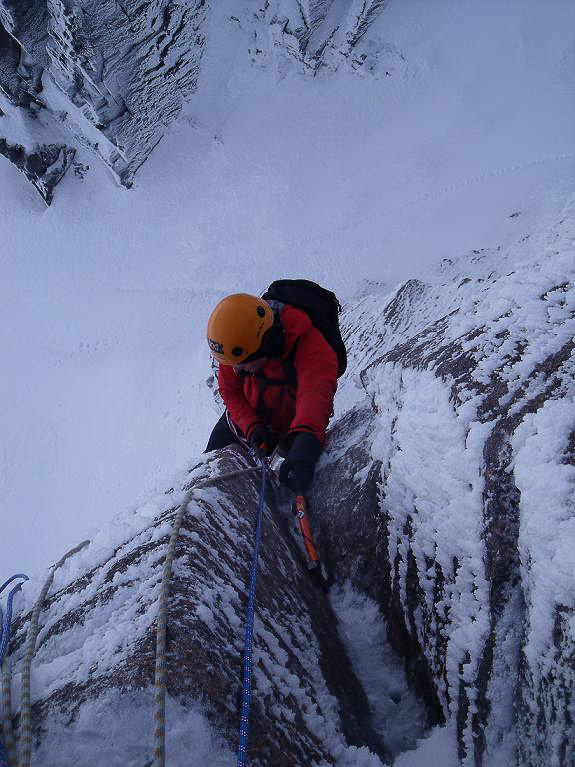 Having made the final decision we quickly found a belay, I took a couple of deep breaths and headed for the steep icy cracked wall above. Nine hours, a lot of route clearing and some of the hardest climbing I had ever experienced later we both stood at the top exhausted but also ecstatic that we had claimed the second ascent of this prestigious route. I was particularly pleased as this was my first grade IX Scottish winter route. 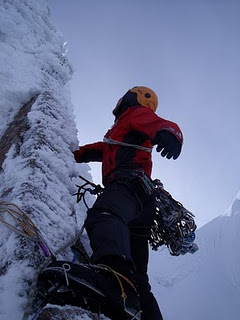 Above: Guy heading for the steep second pitch and getting ready for some serious route clearing!

The climbing had been extremely sustained throughout and due to the amount of clearing required we both had to fight tooth and nail to succeed. But succeed we did!
As we triumphantly walked back to the car park we chatted about how good this winter has been and discussed potential future outings. Even though the route had resulted in me missing the last train home and kipping in my tent in a friends snowed under garden it was still one of the best days climbing I have done.
Below: Me seconding the steep broken corner 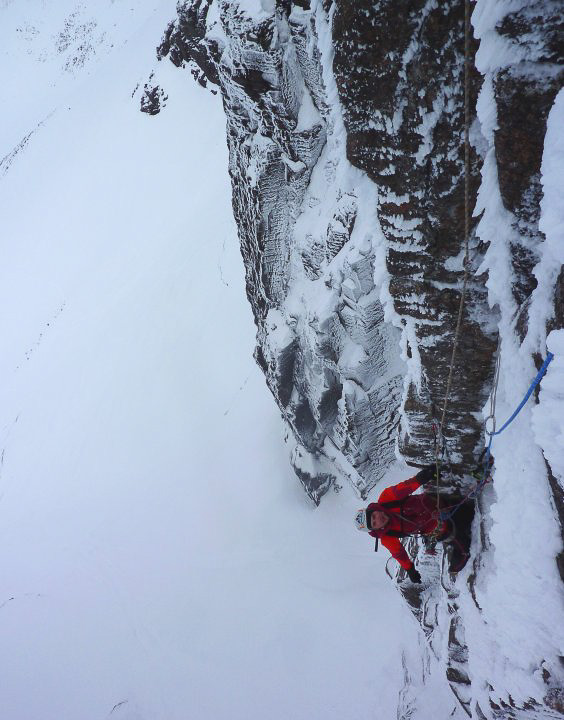 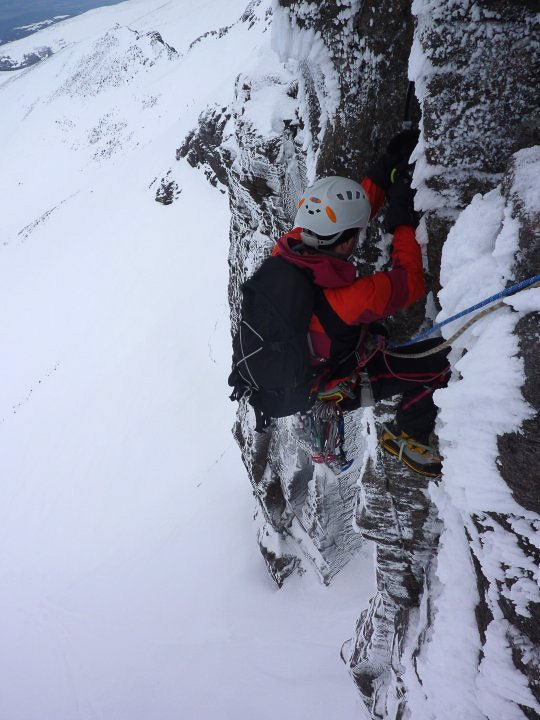 N.B. It should be noted that although Ian and Tim named the route “Pic N Mix” it is referred to in the guide book as “Never Mind – Winter Variation” IX/9.