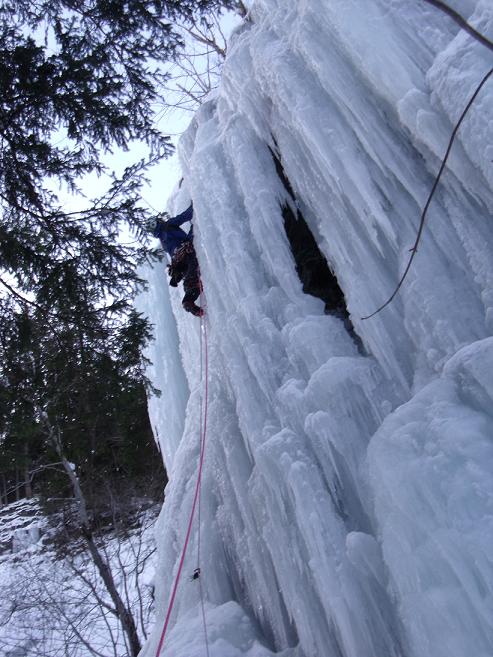 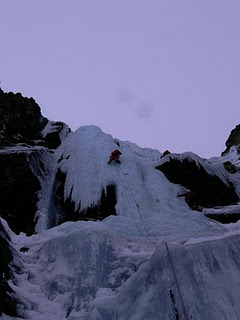 Hoping to do a mixed route on the Midi, Damien and I got up early and headed up to Chamonix to try and catch the first bin up the mountain. Unfortunately due to high winds the bin was not running and it looked like it would be a while before it would be.
We decided to go and look at an ice fall near Bionassay. Damien had passed this cascade when he was ski touring in that area a few months ago. It is not in any guides and we did not know how hard it would be but we decided to go and give it a look. We followed a snow shoe trail into the woods but as a fair amount of snow had fallen recently the trail was very very deep. We persevered and continued along the trail, there were points when the snow was waist deep and it was starting to get very tedious (we should have gone back for our skis).
When we arrived at the bottom of the cascade it looked good and fat but when we took a closer look we realised that there was a pretty impressive crack running straight through it. It had been weakened where the left hand pillar had fractured and fallen down. As the attachment point of the cone at the base of the cascade was also week and cracked we decided not to climb it.
After wading through the deep snow for over an hour and a half to find that the ice fall was not in condition was a bit annoying. But as we walked back to the car we made our plans for tomorrow and we will hopefully have more of a successful days climbing if the weather picks up.
At the end of the day we can’t get too annoyed about not getting too much done today as we can just go out again tomorrow and the next day and the day after that! It’s pretty good living in the Alps 🙂