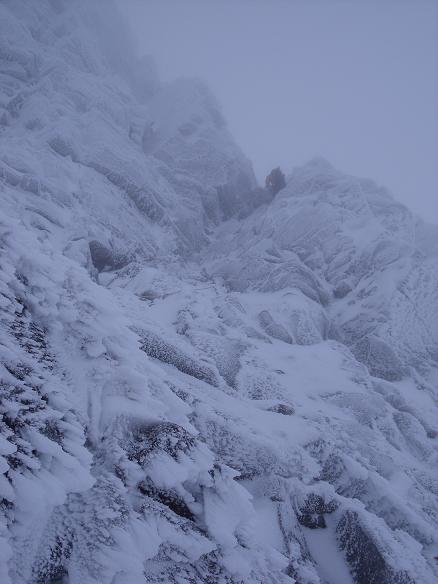 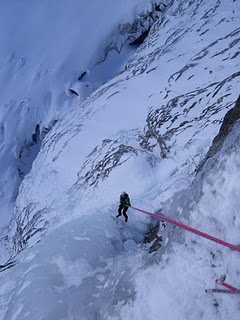 Today Damien and I headed to an area we had not yet been to. We went to Flumet hoping to climb one of the routes in the guide. After a lot of driving around in circles in the town of Flumet trying to decipher the guide description on how to get to the routes we finally got on track and waded through 2km of deep snow to the ice falls. When we arrived at the foot of the ice falls there was much to be desired. They had a lot of snow on them and they didn’t look to inspiring. We walked on a little and found an ice fall that was not in the guide that lead up to the road, we don’t know if this route had been climbed before but we can’t find any info on it and it had not been climbed this season. 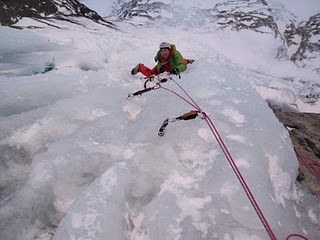 The route had a short 30 meter WI 4+ section to start and then a 50m grade 2 snow and ice pitch (a bit rompy), after this there was a steep 10m pillar which we thought looked like a “short steep step” from the bottom of the route (oh how wrong we were!). This pillar turned out to be very tricky and much harder than it looked. Although it was not too long it was formed entirely from thin hanging icicles, the ice was not consolidated and it was super brittle. Every screw I placed was useless apart from the last one which made me feel better for the top out and every axe placement felt like it could rip at any moment. I tunnelled my way up the middle of the pillar, which involved clearing away the icicles from above and fighting to find solid axe placements (very tiring). I finely pulled over the top and took a belay, but not before my foot blew as I was pulling over the top of the pillar and I thought I was off, but my axe held and I was ok (which is a bit scary when all your screws are totlay crap!). The last short pitch had a 5 meter fan of ice that was ok until you got to the top where there was no ice and it was just a rock slab above, which made the top out a bit spicy to say the least.
Damien and I both thought the route was very technical and hard. Even though the hard section was not very long, it was steep, the ice was very technical and the screws where no good due to the ice conditions. Because of this we gave it WI 6, and even though it might have been climbed before, we called the route “one short step” just for our amusement.